With generous funding from the Indigo Trust, the British Library has started to catalogue and digitise a unique archive of military intelligence maps of British East Africa - a region encompassing modern-day Kenya, Uganda and neighbouring parts of South Sudan, Ethiopia and Somalia. The maps are held in the War Office Archive and were created by British intelligence officers, surveyors and cartographers between the years 1890 and 1940.

During this period the requirement to administer newly-created British protectorates in Africa brought with it the need for mapping of a new order in terms of volume, scale and subject matter. As a result, the archive represents both a milestone in the history of the cartography of Africa and a goldmine of historical information for the modern-day researcher.

The example below is finely executed in watercolours and coloured inks, and shows a region to the north and east of the Nile River in north-western Uganda. It was drawn in 1901, at a time when the area was under British administration within the Uganda Protectorate, and represents the first systematic survey of the area. 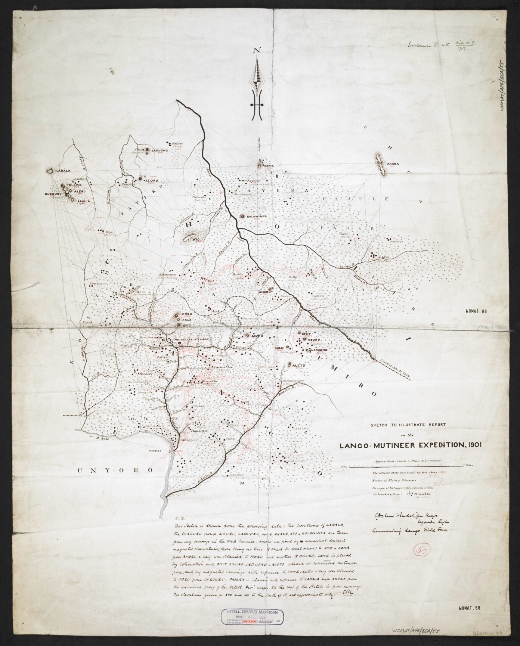 The map provides a wealth of local historical information, showing the flow of water through the region, approximate altitudes of high points and limits of vegetation, the names and locations of tribal regions and settlements, and the names of local tribal chiefs. 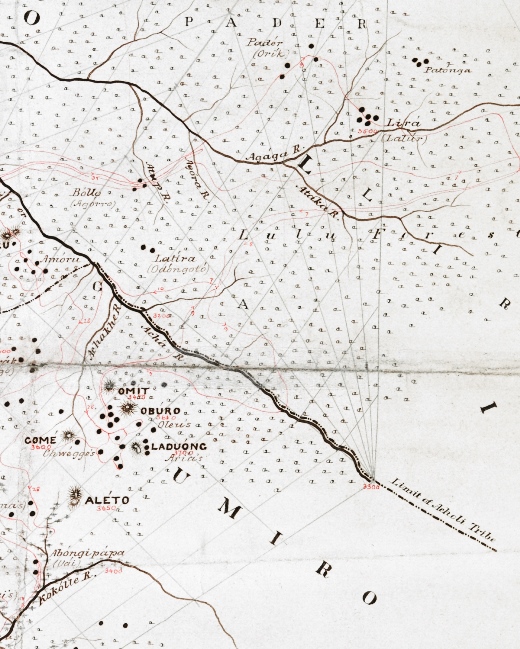 The sheet also documents the Lango Expedition, bringing new detail to reports written at the time. This punitive military expedition was sent against a force of around 100 Sudanese mutineers, who had retreated to the area after encounters with the British military to the south. Once settled, they had entered into blood-brotherhood with members of the resident Lango tribe, and were now said to be promoting unrest by provoking raids on neighbouring tribes. On the map the rebels’ stronghold is labelled ‘Mutineer’s Village’, identifiable today as a settlement called Oromo. Contemporary accounts relate how the British quickly overran the stronghold at the start of the campaign, but the mutineers dispersed through the surrounding country, a region of swampland inundated by early rains and choked with elephant grass up to nine feet high. In terrible conditions constant patrols were maintained throughout the area for a period of four months until all but seven of the mutineers had been captured or killed. The movements of the British columns during this period are meticulously recorded on the sheet in pale red ink.

Subsequently the Lango tribesmen wished to renounce their blood-brotherhood with the mutineers, for which the British devised a de-oathing ceremony. The following extract is taken from the official despatches

‘Dr. Bagshawe, with due formalities, injected a dose of apomorphia into the cicatrix of the incision made in the ‘blood-brotherhood’ rites. This made the patient violently sick in about five minutes. A few nauseous draughts afterwards completed the operation, and the subject’s satisfaction in the breaking of the spell.’