A rum Lot of Maps

As is to be expected, King George III’s Topographical Collection contains outstanding examples of all the major maps and atlases published in his lifetime and extending back to 1660. Less comprehensively the collection goes back to include Italian maps published in Rome and Venice from 1540. 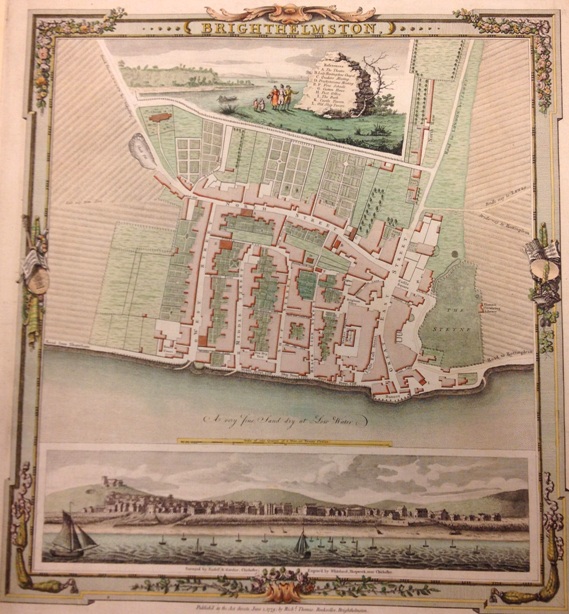 But the Collection’s great delight is the variety of map that is to be found. George III’s beautiful copy of the map of ‘Brightelmstone’ surveyed in 1779 by Thomas Yeakell and William Gardner was probably specially coloured, by Yeakell’s daughter Louisa, a skilled colourist, for presentation to the King. Beneath the map showing a town that had barely expanded beyond The Lanes, there is a panorama of what was soon to become Brighton from the sea just as it was developing as a fashionable resort and a few years before the future Prince Regent created his ‘marine villa’, the predecessor of the Pavilion, just to the north of the old town. Yeakell and Gardner were to become famous far beyond the county of Sussex. Having come to the attention of the Master General of the Ordnance, the Duke of Richmond, Yeakell was to be appointed Master Draughtsman to the Ordnance in the early years of Ordnance Survey, and Gardner Chief Surveying Draughtsmen, and they set the quality and style of its maps. 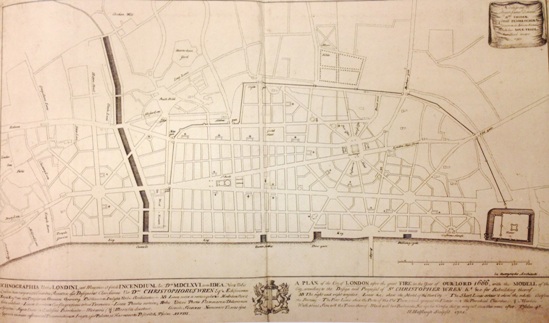 The King’s Topographical Collection includes a particularly rare copy of  Christopher Wren’s radical proposals for the rebuilding of London after the Great Fire of 1666. It is a proof example, published in his lifetime, with the title added in manuscript. Wren’s proposals came to nothing because, contrary to the impression given by his map, the City of London was not a blank sheet. The buildings may have been damaged or destroyed, but property rights remained intact – and so did the imperative to rebuild and to get back to business. 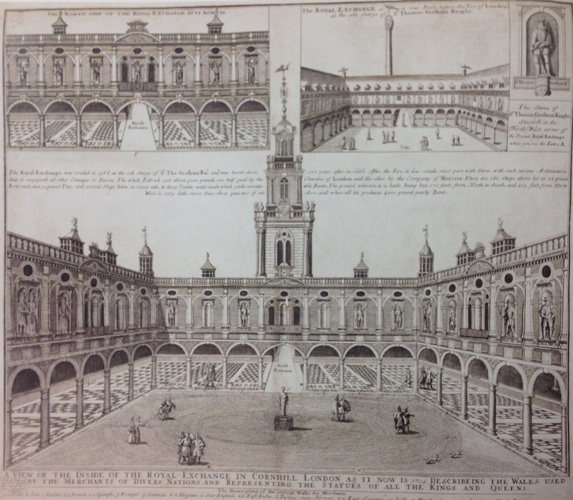 ‘No’, I can hear you saying, ‘There’s a mistake: this a view not a map!’. But look closely and perhaps we can compromise : at the very bottom, beneath the title, letters indicate the positions taken up by the various ‘nations’ under the arcade: the Dutch (a), the Jews (b), Italy (c), France (dd), Spain (ee), Portugal (f), Canaries (g), Virginia (hh), New England (i), East India (kk), Turkey (l), Norway (mm),  Baltic states (‘East-landers’) (nn), Hamburg (p) and finally the Irish (oo) and ‘Scotch or North Britain’ (qqq). Then as now, London was an international city. 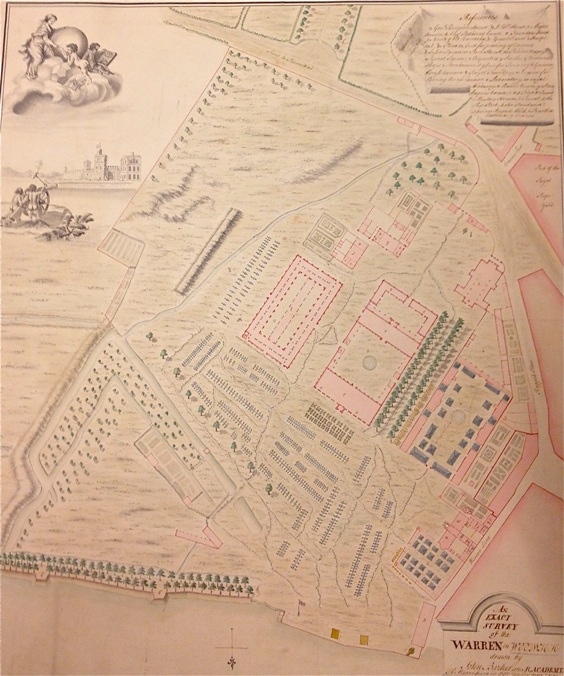 As well as printed maps, the King’s Topographical Collection contains many manuscript fortification plans. Several are, perhaps surprisingly, charming. This one, showing the Military Arsenal in Woolwich in 1749, was drawn and decorated by John Barker, a cadet at the Military Academy that had been founded there in 1741. Cadets were taught drawing as well as surveying and several became talented artists. John shows his skills in the top left, with a fine if fanciful ink drawing of putti firing at the Arsenal (a schoolboy’s fantasy at getting his own back on his teachers?). John went on, over the following decades,  to be an active estate and military surveyor in Britain and Canada. His artistic skills may not have had a chance to develop, but the quality of his survey of Woolwich was such that when the King’s Topographical Collection was inspected by his successors on the Board of Ordnance in the 1830s, they ordered the plan to be sealed for security reasons.  The left corner of the map contains the initials (‘WHT’) of the inspector who insisted on it.  It was only to be unsealed many decades later: about 150 years after it had been created. 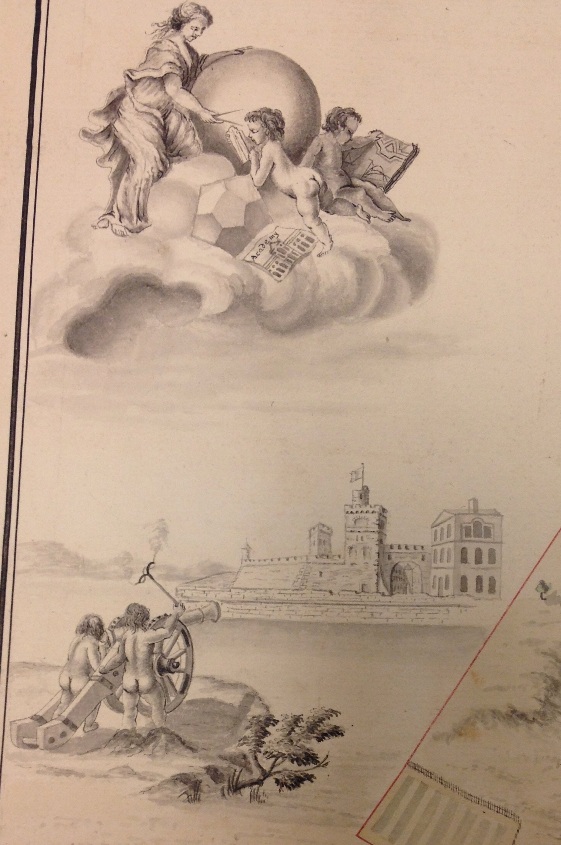 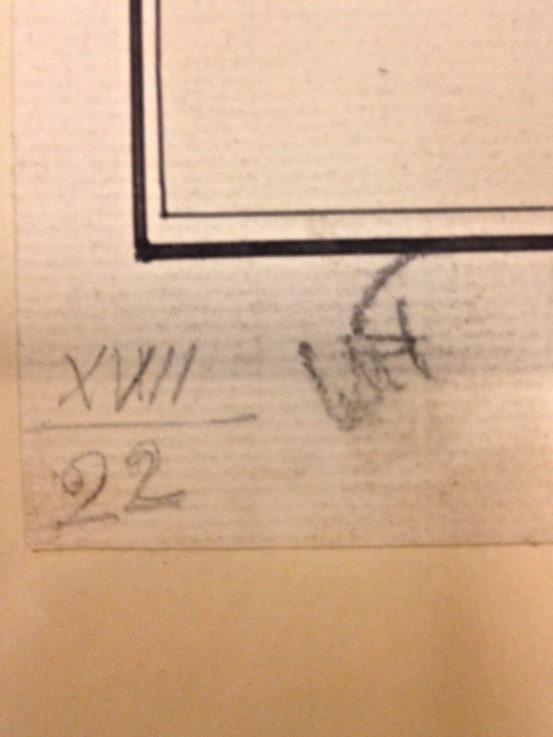 One of the most evocative plans in the collection is this sketch to the view to be had from Morant’s Court  Hill near Sevenoaks in Kent (shown at the bottom)  in about 1780. Executed by a military draughtsman, Captain Robert Johnstone, it shows the country houses to be seen from there. 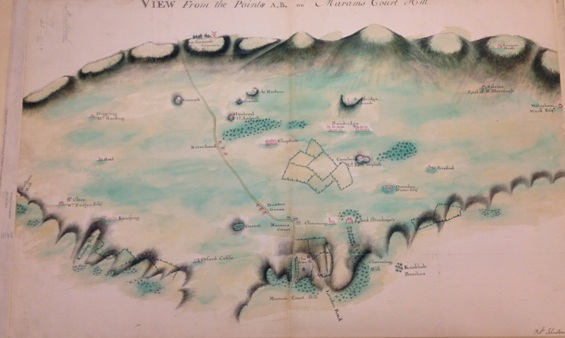 It was commissioned for the King by Lord Amherst, the former Commander-in-Chief of British forces in North America whose country house Montreal (named after the city of which he had been governor), had recently been completed and features prominently. Amherst had invited the King and Queen to visit him one November morning and the letter of invitation is still preserved with the plan. In it, Amherst gives the King instructions for reaching his house, adding that Captain Johnston ‘will be on the right of the road where he took the Sketch, in case Your majesty should chuse to have any further information of the Places’. Then anticipating royal tours of today,  he ends his letter with a request. ‘The Gentlemen and Ladies of the Parish’, he wrote, ‘will be at the Gate and if it pleased Your Majesty not to drive fast by them, their Happiness would be increased in the honour of seeing Your Majesty and the Queen’. 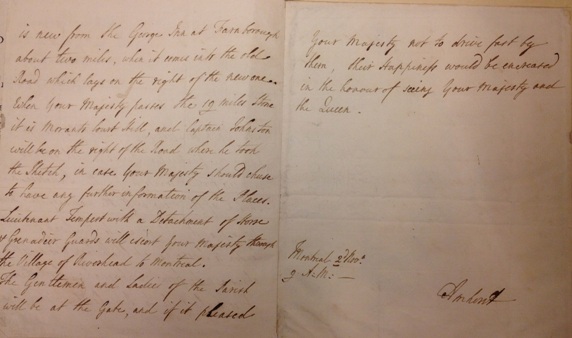 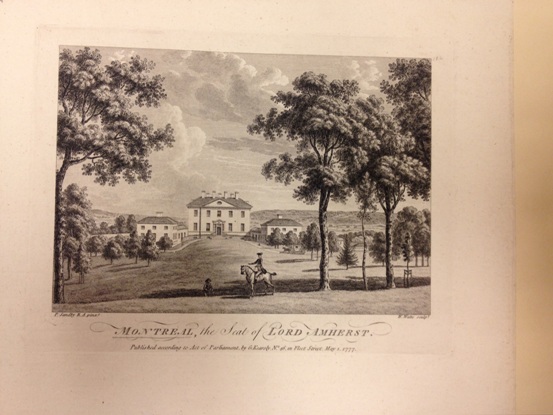 We are seeking money to catalogue and digitise all the maps in the King’s Topographical Collection but particularly those of London and the South-East. Please give generously at www.bl.uk/unlock-london-maps and help us to make more discoveries like these.