London through the artist's eye

About 40% of the King’s Topographical Collection consists of views. Many are drawings and watercolours by enthusiastic amateurs who were keen to record decaying churches, great houses and old buildings. But the work of some of the finest artists working in England in the 18th century such as Paul Sandby, William Pars, Michael ‘Angelo’ Rooker, John ‘Warwick’ Smith and Thomas Jones is also represented.

Most of the views in the collection are printed, but no less splendid for that. In the 17th century, the Bohemian exile, Wencelas (Wenzel/Vaclav) Hollar was the acknowledged master of the etching, a printing technique involving the application of acid to copper. His works are well represented in the Collection which also contains 16th-century engraved views which were once in the collection of Cassiano dal Pozzo (1588-1657).

Perhaps most spectacularly, George III’s reign saw the perfection and spread of the aquatint, a printed hand-coloured process imitating watercolour. British artists were in the vanguard and were anxious to present their best work to the King. As a result the King’s Topographical Collection contains perhaps the greatest group of the highest quality aquatints anywhere in the world.
The sections of the collection relating to London and the South-East contain handsome views from the 16th to the 19th centuries with fascinating stories attached to them. There is more to the large engraved view of the First Royal Exchange than meets the eye. The view was created, shortly after the completion of the building in 1569 by the artist and engraver Frans Hogenberg. The inscription mentions that it was paid for, as a benefit to the public and an adornment to the City, by Sir Thomas Gresham, whose grasshopper crest adorns the top of the weathervane. What it doesn’t say is that the building was meant as a challenge to Antwerp, where Hogenberg had been living until he was expelled because of his protestant beliefs in 1569. He may have felt that this print was a way of getting back at his persecutors. The building was certainly viewed as a thorn in the flesh by the Catholic powers of Europe. When in 1572 Hogenberg was commissioned to prepare a reduced copy of a map of London as the first town view in a multi-volume atlas of town views and maps, Civitates Orbis Terrarum, it was omitted – only for the publishers to be compelled, two years later, to insert a miniaturised version of this view to show the location of Gresham’s Royal Exchange. 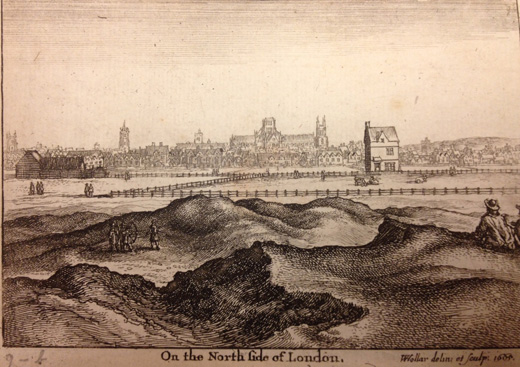 The next image moves a century later, to the summer of 1664, when Wenceslaus Hollar was seeking refuge from smells and diseases prevailing in the city. He moved to the fashionable suburban village of Islington, from which he made a series of exquisite little etchings of the view towards London. This view is dominated by old St Paul’s Cathedral, as seen from the North rather than across the Thames and lacking its steeple that had burnt down in 1561. Hollar shows it two years before its destruction in the Great Fire. In the foreground can be seen a group of Londoners practising their archery on the site of what are now the elegant Georgian houses of Canonbury. Though they doubtless regarded the archery as a sport, it had long been one of the compulsory skills of the members of the citizen militia, the trainbands, who a generation earlier had defended London against the armies of King Charles I. 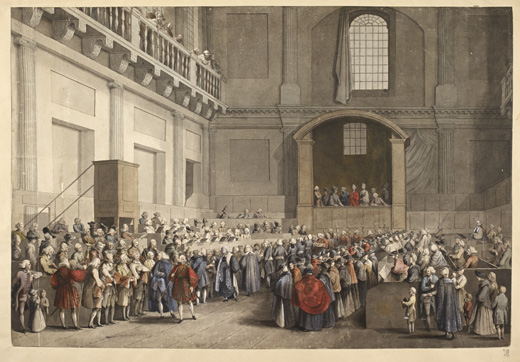 S.H. Grimm, A drawn View of the Distribution of His Majesty's Maundy by the Sub-Almoner, in the Chapel Royal at Whitehall, 1773.  Maps K. Top 26.5-r

A little more than a century later, on Maundy Thursday, 1773, the King’s Almoner, the Rev. Sir Richard Kaye, the King’s Sub-Almoner, distributed the royal alms to needy pensioners in the Banqueting House in Whitehall, which was then used as a royal chapel. He gave 35  pensioners 35 specially minted silver pence each, reflecting the King’s age in  1773.  The King, dressed in red, looked on from a gallery: unlike today, the monarch  did not actually distribute the alms. Kaye commissioned a Swiss artist, Samuel Hieronymous Grimm, who had moved to London 5 years earlier, to depict the scene in watercolour. Grimm produced two large watercolours which are widely regarded as his masterpieces and exhibited them the next year, 1774, at the Royal Academy. There they were seen by George III – who was captivated by them. He tried to get Kaye to present them to him – but Kaye would not listen. George tried again and again to get Kaye to change his mind over the following decades but with no more success. Finally, in 1810 Kaye bequeathed them to George in his will – if he were still interested. By the time Kaye died, the King himself had gone incurably insane, but the watercolours were placed in his geographical collections, the trophies of a pursuit that had lasted nearly four decades. Aquatints enjoyed their heyday just as Great Britain was experiencing a technological revolution and our last two views commemorate different aspects of it. The first, an aquatint by William Daniell, shows the newly-built East India Docks, designed by John Rennie and Ralph Walker, that had just been constructed on the Isle of Dogs in East London. A masterpiece of engineering, it – with the West India and London Docks – gave London the capacity to absorb the goods that were flooding into Great Britain, making London the greatest trading city in the world. Had they not been built, the Thames alone could not have accommodated all the ships, which would have been compelled to go elsewhere. The River Lee is seen entering the Thames to the left and across the river is the site of the O2 Arena. The second aquatint, by Augustus Charles Pugin, the father of the man who decorated the interior of the present-day Houses of Parliament, commemorates a disaster. In around 1800 John Rennie proposed that one of the first by-passes should be created. It would enable horse traffic to avoid the steep slope of Highgate Hill, along the main road North from London. The new road would run along a cutting at the side of the hill until it disappeared into a tunnel beneath a ridge that ran east from Highgate. Rennie’s geological researches were faulty however, and in April 1812 the tunnel collapsed in spectacular fashion, much to the glee of the gossiping classes. This print shows the aftermath. A year later, John Nash constructed a permanent bridge over the chasm and its descendant continues to carry traffic to and from Highgate, while the Archway Road thunders beneath.

This is just a fraction of what is contained in the King’s Topographical Collection and there are many more treasures to be uncovered. We are now fundraising to catalogue, conserve and digitise this collection and you can help us by making a donation today at www.bl.uk/unlock-london-maps. If would like to learn more about the project and how you can get involved, please get in touch with Rachel Stewart (rachel.stewart@bl.uk) and me, Peter Barber, at the British Library (peter.barber@bl.uk).