Robert Adam (1728-1792), who died on this day in 1792, is perhaps the best-known British architect of the 18th-century. He, and his lesser-known brothers, John and James, combined and re-modelled architectural and decorative elements from Roman antiquities in Pompeii and Split, which they had seen during their Grand Tour, to create a distinctive style, foreshadowing the neo-classicism of many British buildings created between about 1780 and 1850. They are also famous as being among the first architects to design all aspects of their buildings, from plan, exterior and interior designs to the furnishings and fixtures.

The Adam brothers played a major part in the creation of the King George III’s geographical Collection when in 1762 they negotiated the purchase, on the King’s behalf, of the collections of Cardinal Francesco Albani, which account for some of the most outstanding items in the Italian volumes of the King’s Topographical Collection. Of particular importance are the 16th-century maps and views collected by Cassiano dal Pozzo, the most important 17th-century collector of prints and drawings, and architectural drawings from the papal archives.

Despite this successful mission, Robert Adam never enjoyed the sustained patronage of George III, but the King’s Topographical Collection contains autograph drawings by him for actual or proposed buildings in London and the South-East, and views of the buildings that he created.

The most significant, and of crucial importance for any evaluation of his work, is the only surviving hand-drawn plan by him and his brothers for an important development on the Strand, called the Adelphi, or, in English, ‘Brothers’ – an allusion to Robert, James and John who all worked on it. 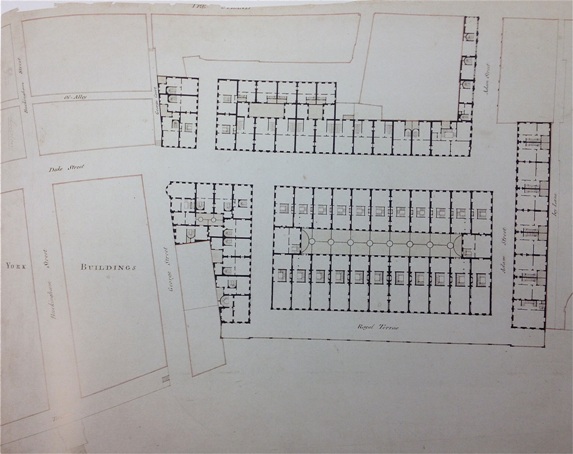 James, John and Robert Adam and their workshop]  The unique surviving plan for the Adelphi, 1786.  The ‘Royal Terrace’ overlooked the Thames.  Maps K Top 22.7-a

The plan, dating from 1768, was probably sent to the King in the hope of raising money in 1771. The Adelphi, which was modelled on the palace of the Emperor Diocletian in Split in Croatia, was the first ever attempt in Britain to disguise what was effectively a housing estate as a palace (an idea later followed in the Nash terraces around Regents Park). The King’s Topographical Collection also includes a handsome view of how the brothers thought their development would look, with the massive arches supporting the buildings leading directly to the shores of the Thames as they did before the creation of The Embankment in the mid-19th century.

The heart of the Adelphi was demolished in the 1930s, though several of the houses in the side terraces and the vaults remain.

The King’s Topographical Collection contains preliminary drawings for various handsome structures that never got built. One was a proposed grand entrance to London at Hyde Park Corner – not far from where the Wellington Arch stands today. Imposing though it looks, it was primarily meant to be a tollhouse! 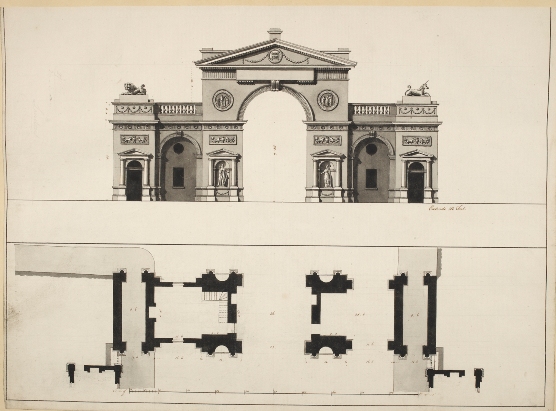 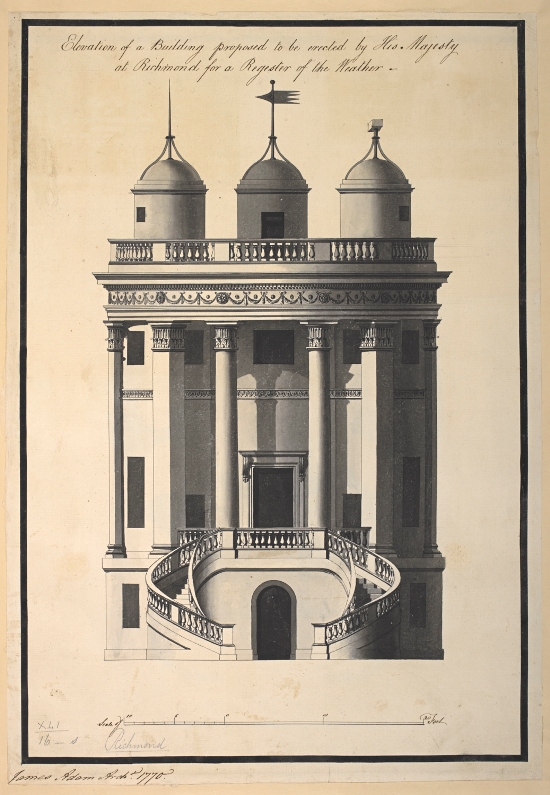 ‘An elevation, in Indian ink, of a building proposed to be erected by his Majesty at Richmond, for a register of the weather, designed by James Adam, Archt. 1770,’  Maps K Top 41.16-s

At the time that the Adelphi was being planned, in 1770, brother James Adam submitted an elegant proposal for a weather observatory in Richmond Park, reminding us that, like the true Briton that he prided himself on being, George III was fascinated by the vagaries of his homeland’s climate!

The Collection includes views of some buildings that remain with us to today, like Kenwood House between Hampstead and Highgate, which Robert Adam remodelled for the Lord Chief Justice and fellow Scot, the Earl of Mansfield between 1764 and 1779, adding a completely new library wing. Adam was rightly proud of his work, and the print of the garden front which he included in his collected works is to be found in the King’s Topographical Collection. But in this blog we are reproducing an idyllic view published in 1781 showing the artist, George Robertson, drawing the House from meadows on the other side of the still-existing lane that led from Highgate to Hampstead Lane. If you look carefully you can make out the Spaniards’ Inn in the background. 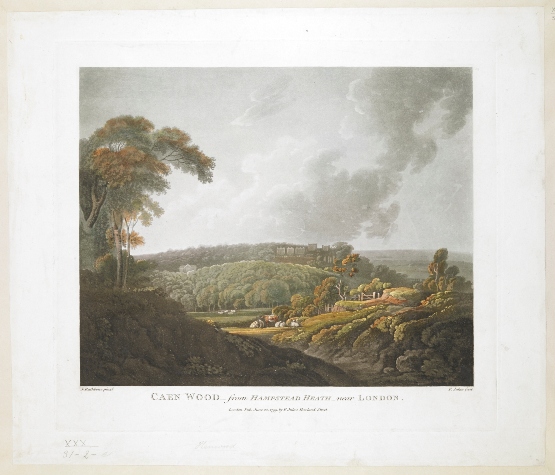 Perhaps the most remarkable building that Robert Adam created in the South-East of England, however, was the enormous – but temporary – pavilion to host a fete champetre hosted by the11th Earl of Derby in the gardens of his home, The Oaks, near Epsom in Surrey on 9 June 1774. The Earl is best remembered to day for the races that are named after him – and after his home. The festivities were intended to celebrate the wedding of the Earl’s grandson, Lord Stanley, to Lady Betty Hamilton. A vestibule led to a dining and supper room was 120 feet long which encircled the ballroom. Over 1000 visitors in fancy dress attended and the festivities which were marked by a masque, country sports, country dances and formal dances directed by the ballet master of the Royal Ballet. Prints by Caldwell and Grignon, published in 1780 immortalised the rather frenetic atmosphere – and the architecture – of what must to its participants have seemed a golden afternoon and evening. 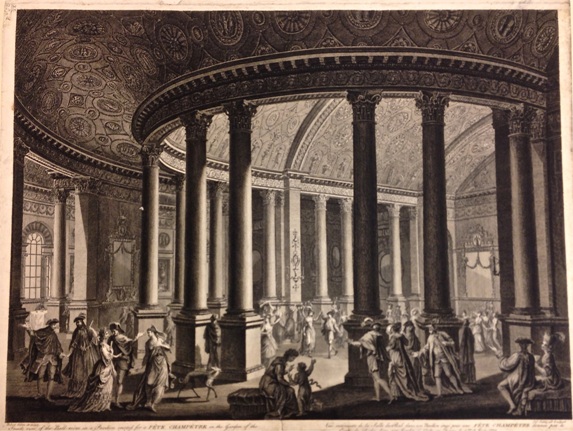 James Caldwell, Interior view of the ball room of the pavilion erected for a Fete Champetere  in the garden of the Earl of Derby’s in the Oaks, at Epsom Surrey. 1774.  Engraved by Charles Grignion, 1780. Maps K Top 40.25-b 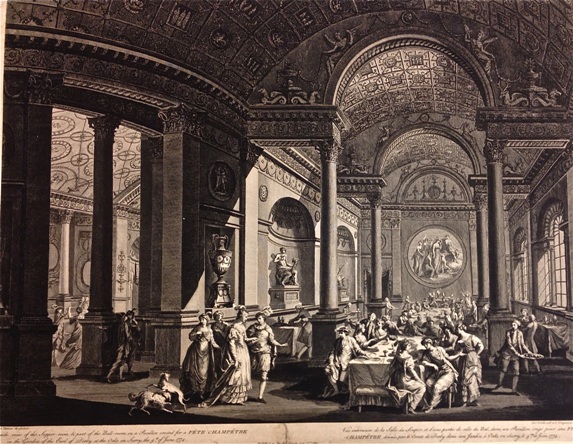 James Caldwell, Interior view of the supper room of the pavilion erected for a Fete Champetere  in the garden of the Earl of Derby’s in the Oaks, at Epsom Surrey. 1774. Engraved by Charles Grignion, 1780. Maps K Top 40.25-c

We are fundraising to catalogue, conserve and digitise King George III's collection. Help us unlock one of the world's most important map and view collections by making a donation today at www.bl.uk/unlock-london-maps. If would like to learn more about the project and how you can get involved, please get in touch with Rachel Stewart (rachel.stewart@bl.uk) and me, Peter Barber, at the British Library (peter.barber@bl.uk).