Within the many treasures of George III’s Topographical Collection, comprising some nearly 40,000 maps and views of all areas of the world, is a curious map of Bohemia by Jodocus Hondius (1594 or 1595-1629) that is amalgamated from two separate copperplates, printed on two separate sheets, and joined here to form one map. 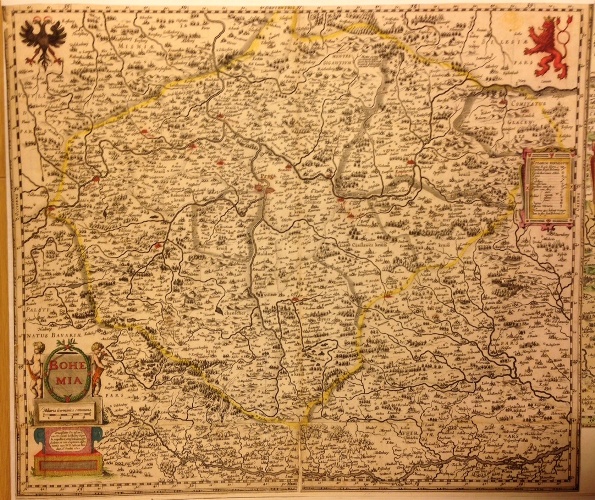 Maps K.Top.89.15. – the join of the two sheets is just visible beneath the mileage scale and extends across the whole width of the map.

The southern portion of the map, beneath the join, expands the geographic detail to include the River Danube with the cities of Linz and Vienna prominent. This “extension” is printed on a separate piece of paper from a separate copperplate and is carefully joined to the “original” map on the sheet above. This additional portion of the map also includes a statement of responsibility on a plinth at lower left, directly beneath the title cartouche on the initial sheet: 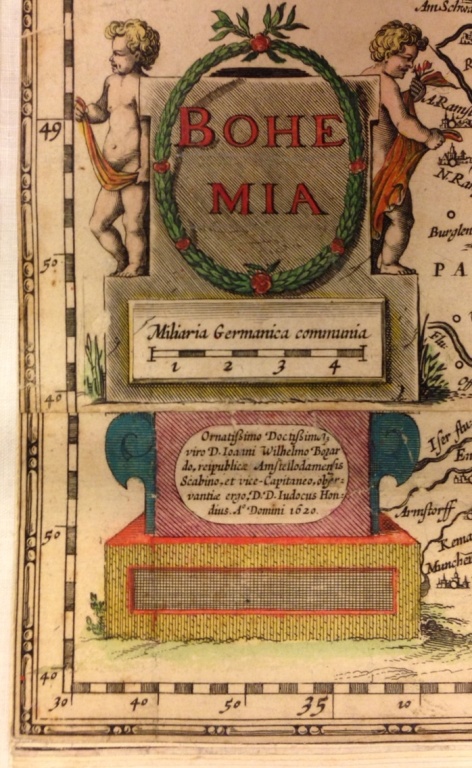 Maps K.Top.89.15. – detail of the title cartouche and statement of responsibility, with the paper join visible between the two.

The map is dedicated to an alderman (?) of Amsterdam “Ioanni Wilhemo Bogardo” (Jan Willem van den Boegaerde?), about whom further information is sought.

However, the printed date of 1620 perhaps offers a contextual reason for the map’s geographic extension into Austria at this time. Peter Barber was quick to point out that the map makes no reference to “Bila Hora” (= “White Mountain”) near Prague, suggesting a date of production in 1620 prior to the important battle there in November. After the defenestration of Prague in 1618 Catholic governors Vilém Slavata of Chlum and Košumberk and Jaroslav Bořita of Martinice, along with their scribe Philip Fabricius, fled Prague for Vienna and the support of their fellow-Catholic, the Holy Roman Emperor, Ferdinand II, also King of Bohemia (1617–1619 and 1620–1637). The Bohemian Revolt (1618–1620), the Protestant uprising against the rule of the Catholic Habsburg dynasty that had deposed Ferdinand II as King of Bohemia for the Protestant Frederick V (King of Bohemia 1619 – 1620), culminated in 1620 with the Battle of the White Mountain outside Prague when Ferdinand II regained the crown and drove the Protestant “Winter King”, Frederick V (the Elector Palatine), into exile in the Netherlands.

Perhaps the market dictated the need for a map illustrating the ever-changing events in Bohemia by showing routes between Prague and Vienna - this map’s extension to both cities renders it rather topical! One might conclude that the map was published (in Amsterdam) during the short reign of the “Winter King”.

No other institutional examples of the map with this extension have been located thus far.

Following this map within the collection is another example of the Hondius map of Bohemia without this seemingly unique extension. Maps K.Top.89.16. is a more standard version of the map that was published in the 1631 Latin text edition of the atlas Appendix Theatri ... et Atlantis. It is identified as such by the Latin text to verso with the signature "DDDDDD" at the bottom of the page (see Van der Krogt, P. Koeman's Atlantes Neerlandici,Volume II, atlas 2:021, map 83, page 42). 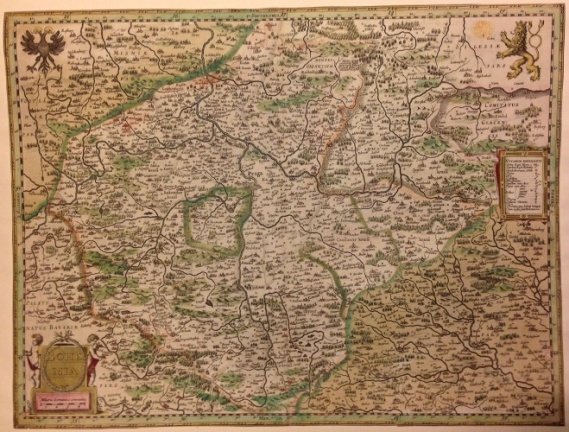 The Catalogue of Maps, Prints, Drawings, etc., forming the geographical and topographical collection attached to the Library of his late Majesty King George the third, etc., London, 1829, which was essentially the collection inventory on its transfer from George IV to the British Museum that has been masquerading as its catalogue since publication in 1829 (thus highlighting the value in the current cataloguing project), listed this second Hondius Bohemia map as "Eadem Tabula" (= “the same map”) where the previous listing was "Bohemiae Tabula per Judocum Hondium, 1620”. They are clearly not the same map and their differences are cartographically, bibliographically and historically important.

To further support the K.Top cataloguing project and the potential for subsequent discoveries please visit the British Library website.