Revelatory Rivers in Germany and the Holy Roman Empire – Part 1

The K.Top cataloguing and digitisation project marches ever forward, rather like the Swedish military in this map. The illustration below shows a battle scene, one of several on the map, from the Swedish Intervention during the Thirty Years’ War (1618-48). The military are shown south-east of Prague, in the Kingdom of Bohemia. This map’s military and historical significance had, prior to the current cataloguing and digitisation project, been obscured by the possibly perfunctory description in the British Museum’s 1829 catalogue:

Catalogue of Maps, Prints, Drawings, etc., forming the geographical and topographical collection attached to the Library of his late Majesty King George the third, etc., 1829

Now titled in the British Library’s catalogue in accordance with published works regarding the map, particularly Harold Köhlin’s article A map of Germany made after the Swedish Campaign of 1630-48 in Volume 8 of "Imago Mundi" (1951), but also Peter Meurer’s entry for map number 8.12.5.aa in Corpus der älteren Germania-Karten (2001), the new title offers better access to the map itself, while the citations to these reference works act as a platform for further study. Access to the catalogue is freely available through Explore the British Library.

Although the map does indeed show rivers, just as the 1829 catalogue entry suggests, its purpose was celebratory - peace at the end of the Thirty Years’ War – and it was also intended to illustrate and glorify Swedish intervention by marking the locations of important battles. A “thank you” in cartographic form, perhaps. The map was created by Carl Heinrich von der Osten, a German Royal Engineer in Swedish service, who signs the map at lower right, and was drafted by Matthaeus Merian. It is printed on four separate sheets and joined. 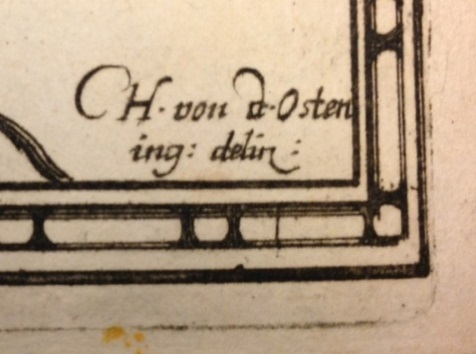 The map is scarce in any state and the K.Top example appears to be the first state of the map, prior to the addition of surrounding letterpress text panels and a grand title - “AMORE PACIS”. Meurer mentions just one example of this first state; in the Staatsbibliothek, Berlin (V 5606). This map is just one of some approximately 6000 maps and views devoted to Germany and the Low Countries, about 15% of the whole and thus one of the collection’s largest geographical areas. Housed in a guard volume focussing on the rivers in Germany, and indeed the wider Holy Roman Empire, this map by von der Osten was the first of several important discoveries all from this same volume, details of which will follow in subsequent blog posts.