The British Library is pleased to have a number of of maps and views currently on display in a special exhibition at the Norman B. Leventhal Map Center at Boston Public Library. These maps, which come from the King's Topographical and RUSI collections, were digitised and catalogued thanks to a project involving the Leventhal Map Center and generous private sponsors. The exhibition is entitled 'We Are One: Mapping America’s Road from Revolution to Independence,' and we are delighted to host this guest blog post about the display by Allison Lange.

In late April 1775, twenty-five-year-old British Lieutenant Richard Williams left Europe for Boston to take part in the American war. The battles of Lexington and Concord earlier that month had prompted British troops to retreat to the city, which was soon surrounded by American soldiers. Williams landed in Boston in June, and—despite the circumstances—he was glad to be there. He declared in his diary, “the Land was a pleasing object after six weeks of absence from it.”

Williams’s duties were tied to the land. As a cartographer and artist, he mapped the area for military and political leaders to study. The British Library’s map collection includes several pieces of his work that offer unique, beautiful views of life during the siege.

The day after his arrival, Williams took stock of Boston. He went to Beacon Hill to view the rebellious colonists surrounding the peninsula. “Boston is large & well built, tho’ not a regular laid out town,” he concluded. Williams thought the area had seen better days “before the present unhappy affairs” when “it was livly [sic] and flurishing [sic].” 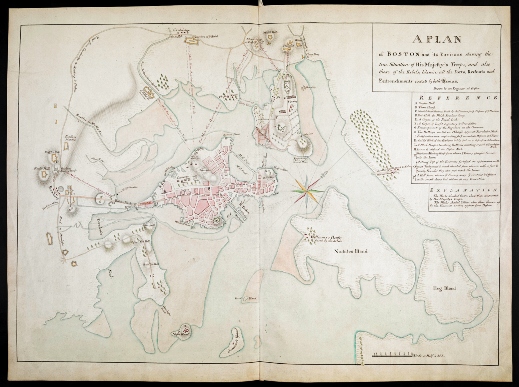 [Richard Williams] (active 1750-1776), 'A Plan of Boston and its Environs Shewing the True Situation of His Majesty’s Troops and Also Those of the Rebels, Likewise All the Forts, Redoubts and Entrenchments Erected by Both Armies.' 1775. Manuscript, pen and ink and watercolour. British Library Add.MS. 15535.5.

Williams used his view from Beacon Hill for his maps and sketches. He likely drew the Plan of Boston and its Environs Shewing the True Situation of His Majesty’s Troops, which is part of the British Library’s map collection, from this spot. The map depicts the positions of the British and American troops in October 1775. Fortifications were colored yellow for the rebels and green for the British. Camps, like the one on the Boston Common, are red.

Richard Williams (active 1750-1776), 'A View of the Country Round Boston, Taken from Beacon Hill…Shewing the Lines, Redoubts, & Different Encampments of the Rebels Also Those of His Majesty’s Troops under the Command of His Excellency Lieut. General Gage, Governor of Massachuset’s Bay.' 1775. Manuscript, ink and watercolour. British Library Maps K.Top 120.38.

In addition to this map, Williams captured the landscape with watercolors like A View of the Country Round Boston, Taken from Beacon Hill. He sketched Boston’s churches and homes and documented the British camps that had transformed the city into a military base. At the bottom of the scene, Williams included a key to identify fortifications like Castle Williams and the “Redoubts of the Rebels.”

British military and political leaders commissioned maps like these to gain a better sense of the Revolutionary War. Williams drew his Plan of Boston and sent it to London, where it was printed less than two weeks before the British evacuated the city on March 17, 1776. He also sent his watercolor view, one in a series, to London. This piece eventually made its way into the British Library’s King George III’s Topographical Collection.

After evacuating Boston and sailing for Nova Scotia, Williams became ill and abruptly stopped writing in his diary. He returned to England, where he died on April 30, 1776. Although he died young, the unique views he left behind offer valuable insights into life during the siege.

For the first time, the British Library has loaned these items for display in the city that Williams captured on paper. Williams’ work is featured in the Norman B. Leventhal Map Center’s exhibition at the Boston Public Library. The exhibition, We Are One: Mapping America’s Road from Revolution to Independence, uses maps to explore the events that led thirteen colonies to forge a new nation. We Are One demonstrates that maps, from Williams’s plan to early maps of the new nation, were central to the revolutionary process. The exhibition features maps as well as prints, paintings, and objects from the Leventhal Map Center’s own collection and those of twenty partners, including the Library of Congress, William L. Clements Library, and John Carter Brown Library. Explore geo-referenced maps from the exhibition here.

The exhibition will be on display at the Boston Public Library through November 29, 2015. We Are One then travels to Colonial Williamsburg from February 2016 through January 2017 and to the New-York Historical Society from November 2017 through March 2018.

The Leventhal Map Center also hosts the NEH-funded American Revolution Portal database. Researchers can access maps from the American Antiquarian Society, British Library, Library of Congress, and other institutions in one search. Users can download images for research and classroom use.

Access these resources and learn more about We Are One here