Following a previous blog post concerning the so-called (at least in the 1829 catalogue) “Map of the Rivers in Germany” by Carl Heinrich von der Osten, the King’s Topographical Collection cataloguing project continues to “go with the flow” by examining subsequent river maps, all from the same volume (88) within the K.Top, with some additional facts and discoveries to report.

An example of one of the K.Top guard volumes with its distinctive green spine. The insignium of George III is shown at the top of the spine and the volume number “CXXIV” (74) and shelfmark numbers within (1-51, in this instance) are also given.

Many of the maps and views within the collection are housed within these guard volumes (illustrated above) which are numbered 1 to 124, but comprise some 246 in total because they are presented in multiple parts. Thus Volume 88 has three parts: shelfmarks 1-25 in the first, 26-33 in the second and 34-67 in the third. The physical bindings were created by the British Museum during the 1950s and 1960s, but the volumes follow the more historic organisation of the collection whereby the content is presented in a coherent geographical order and with shelfmarks in sequence. Volume 88 (1-25) contains maps of the rivers of Germany. The volume opens with general maps of the rivers, then presents individual rivers including the Rhine and the Danube, amongst others.

Maps K.Top.88.13. is a map of the River Rhine and environs, oriented with north to the right of the map. It is a copper engraving, printed on three sheets, joined. The map is based on the work of Caspar Vopel in 1555 and illustrates the importance, both strategically and with trade in mind, of the Rhine and its environs. 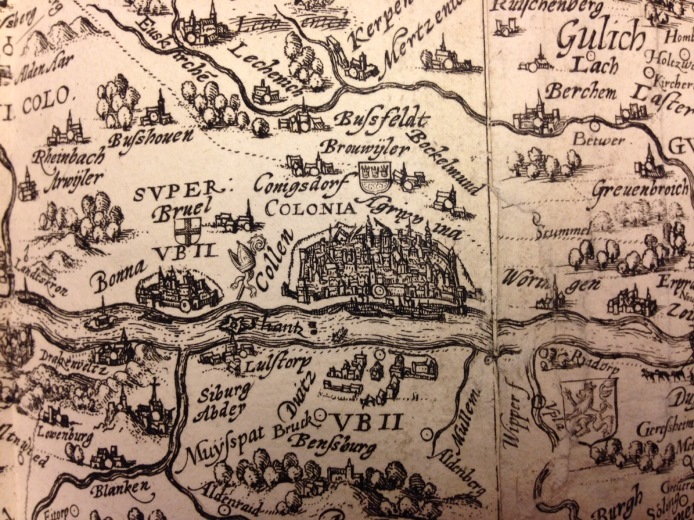 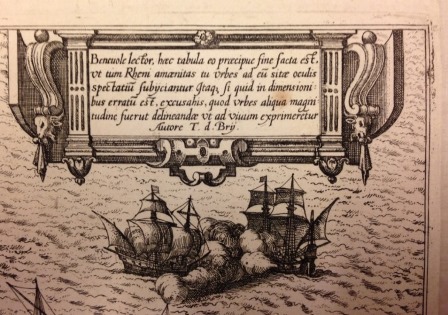 The K.Top example of the map is a scarce edition. In fact, although it is comparable with map number 79/8.5 listed in Robert W. Karrow’s Mapmakers of the sixteenth century and their maps, it is not an exact match and only one other seemingly direct comparison has been located thus far – an example sold by Sotheby's in London at their Travel, Atlases, Maps and Natural History sale, 15 November 2011, lot 46.

Titled (and not incorrectly) "The Course of the Rhine from its source to its Mouth, by T. d. Bry. Three small sheets" in the British Museum’ s Catalogue of Maps, Prints, Drawings, etc., forming the geographical and topographical collection attached to the Library of his late Majesty King George the third, etc. (London: 1829) this title had become the rather more misleading "(Rheni tricornis et Widi nova et germana descriptio ... Description nouvelle et vraye du Rhin et de ses trois embouchures avecque les fleuves ... Dess berühmten und herzlichen Flusses eigentliche und warhafftige Beschreibung.) Auctore T. d. Bry” by the time the map reached the British Library’s online catalogue. This online title more accurately relates to Maps *27060.(15.) – a separate and later edition of the map with additional letterpress text and with the name "Overadt" added to the title cartouche. Listing both maps together, despite their different dates of publication, on one catalogue record and with just one (of two) titles can cause confusion. The maps, published in disparate years with different persons associated, now have separate catalogue records as a direct result of the K.Top cataloguing project.