Putting yourself on the (old) map

Most of you know the British Library and a dedicated group of volunteers have, for the last few years, been plugging away at georeferencing maps from across the Library’s collections. The most recent, and rather large, set of maps has been carved out of the cache of Library images held on Flickr and now our volunteers are working their way through over 50,000 maps in need of georeferencing. Thanks to the work of our dedicated georeferencers things are progressing well, with over 9,000 maps referenced so far but for those of you interested in getting involved there are still plenty of opportunities for you to do so.

Above: the geographical spread of the maps georeferenced so far.

As you can see above, the georeferencing done so far has already dealt with maps from an impressively wide geographical area. In fact, there are now so many maps available I'm going through them and picking out some that strike me as particularly interesting. The below map of the expedition of Baron Adolf Eric Nordenskiӧld into the interior of Greenland is from a publication about his 1883 trek to understand more about the continent, it's also one of my favorites from the current georeferenced batch. The map almost made it into the Library’s recent Lines in the Ice exhibition as Nordenskiӧld encountered what he thought was a new mineral, Kryokonite, but which turned out to be coal dust deposited by snow. In short, Nordenskiӧld found some of the earliest evidence of the global circulation of pollutants – he just didn’t know it yet. 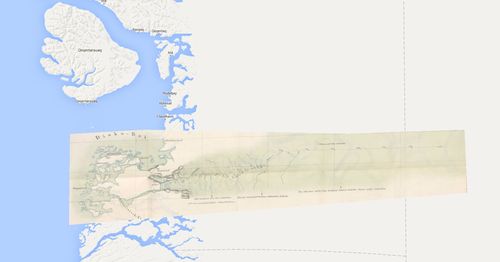 For completely different reasons I’m also very keen on the two following maps, depicting late nineteenth century Niagara Falls (both sides) and Melbourne at a similar time. It’s not so much the content of the original maps as their situation on the contemporary Google Map which interests me here as both now form small parts of sprawling urbanised areas. Niagara Falls has not developed in the same manner as Melbourne, which grew explosively in the late twentieth century, but both maps and their background say a lot about twentieth century urban development. Above: Niagara Falls, Canada and U. S. A., published 1886. See in Georeferencer.

It is these sorts of historical nuggets and contemporary juxtapositions which make the BL Georeferencer so interesting and if this whets your appetite to get involved I have good news, there are still plenty of maps left to work with. You can find out more about the process of signing up and working with the material here. Another gem to come out of the work of our volunteers’ work is the availability of these maps through the wonderful Old Maps Online. This has been available through a web browser for some time but it now comes to you in a mobile phone app too.

There is more information about the app and its uses via this press release from the Old Maps Online team and it is well worth a read. For the purpose of this blog the most pertinent thing to point out is that the maps you reference from the current cache of material will also be available, in the palm of your hand, through this app. The bonus feature of the Old Maps Online app is that you can now find maps about where you are, wherever you are, so long as you have your phone, a signal and (especially if you are outside of your home country) a suitable mobile data package.

This means that if you go for a walk, say, on the Downs of Kent you can open the app and see georeferenced material about your location originating from the British Library, and other institutions who have taken part in the project. All this while stood in a field, a bog, a forest or a town. Have a go, it really is great fun.