'Whither the Fates Carry Us': Bermuda goes Off the Map 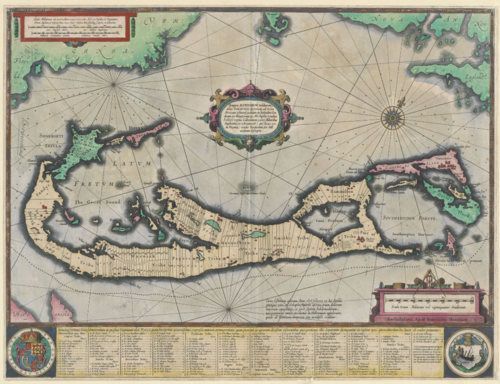 The coat of arms of Bermuda isn’t the most cheerful in the world, as it depicts a ship in danger of being wrecked on the rocks, but its motto, Whither the Fates Carry [Us], is slightly more hopeful than you first think. In 1609 the Sea Venture, flagship of the Virginia Company, foundered on rocks after the commander in charge, Admiral Sir George Somers, decided his crew would survive this situation better than riding out the storm which bore down on them. All hands survived and found themselves on the island of Bermuda, the beginning of English settlement there. The story of the Sea Venture is not just one of oceanic derring-do, though. The narrative published about the discovery of the island also inspired some of the most famous writings in the English language.

Various accounts of the wreck of the Sea-Adventure were published, many of them becoming best sellers as they gripped the public imagination. A Discovery of the Barmudas, otherwise called the Ile of Divels, A True Declaration of the Estate of the Colonie in Virginia,and True Reportory are just a few of the pamphlets although my favourite tells the whole story in its title; Newes from Virginia, The Lost Flocke triumphant, with the happy Arriual of that famous and worthy knight, Sr Thomas Gates, and the well reputed and valiant Captaine Mr, Christopher Newporte, and others, into England, With the manner of their distresse in the Hand of Deuils (otherwise called Bermoothawes), where they remayned 42 weekesy and builded two Pynaces in which they returned into Virginia. Some other clues are found in these titles as to how these accounts of shipwreck could inspire Shakespeare, the mention of the ‘Ile of Divels’ (Isle of Devils)  fires the imagination while other details in the accounts clearly connect to elements of the narrative of The Tempest. 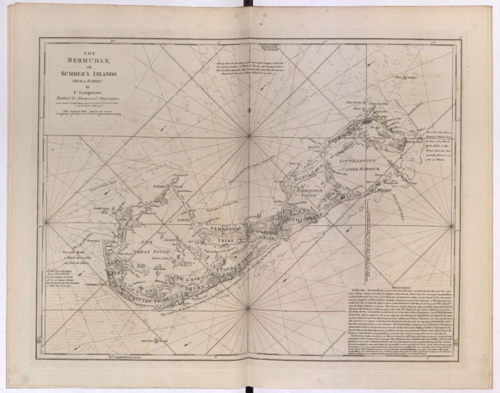 Shipwreck, wilderness and the nature of authority all feature in these accounts and their evocative descriptions but it is probably the evocative description of Bermuda and its landscape which most captured the public, and Shakespeare’s, imagination. Bermuda was eventually to capture the attention of capitalists and plantation owners, as the map above shows. Here the wilderness encountered by the Sea Venture crew has been replaced with a landscape of sugar plantations and settlement, as shown by the many names and plots inscribed on the landscape. However, one element of the map provides a bridge between the moment of encounter and this settled, developed present, the illustration in the lower left corner. This is the same coat of arms discussed above, already bearing the Sea-Adventure in peril and the saying, ‘Whither the Fates Carry [Us]’. It also reminds us that, as violent winds were important to the settlement of Bermuda so they were important to the plot of The Tempest, with Prospero raising a storm to bring Antonio and his crew to the island on which he is exiled. 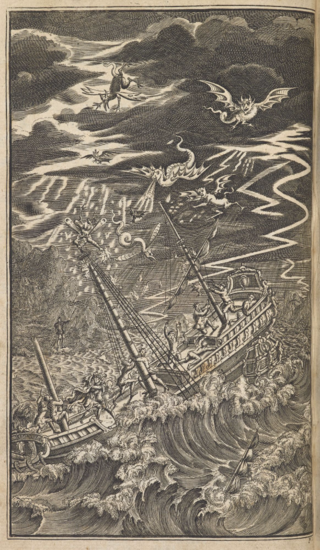 Above: a frontispiece depicting The Tempest, from Nicholas Rowe's, 1709, The Works of Mr. William Shakespear: in Six Volumes [BL: 2302.b.14]

For ‘Off the Map’ the possibilities provided by this map, the Bermuda accounts and other items made available, such as the above from Nicolas Rowe’s 1709 edition of The Tempest, are wonderful to think about. Exploring a terrifying, open world island (don’t worry, Bermuda’s only small) after being ship-wrecked by spirits? A Lost-style adventure thriller where you and your crew have to figure out where exactly you’ve ended up (with or without polar bears)? Or, my personal favourite, perhaps something a little bit more ‘Secret of Monkey Island’, where your only hope of escape is to evade exiled sorcerer-kings, and pirate daemons, fight them off with root beer and find a ship to get home to your one true love? In short, Bermuda has already inspired one of the greatest works of English theater, now it’s over to video games.