Murder and Madness in the Castle: Macbeth’s Inverness 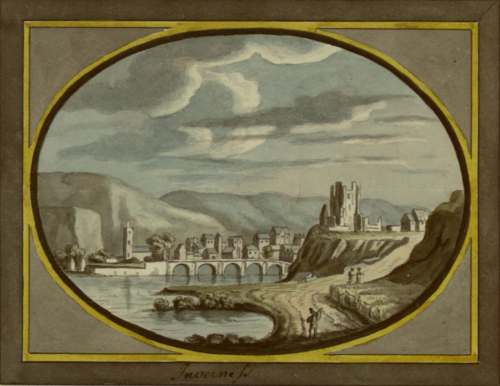 Above: Inverness Castle before the Jacobite uprisings [BL: Maps K.Top 50.10.a]

In Shakespeare’s Macbeth Inverness Castle is the site of Macbeth’s murder of King Duncan, allowing Macbeth to usurp the crown. It is also where Macbeth’s descent into madness plays out, with many key scenes happening within the confines of the castle. As with so many of Shakespeare’s productions the events of Macbeth are, very loosely, based on fact, with historical characters used to drive the dramatic narrative. Much about the actual history of these individuals is different from how Shakespeare’s drama plays out, for example, Duncan was murdered at a much younger age than Shakespeare portrays, but the characters and locations can still be fixed, to some extent, geographically and historically.

Despite this, and somewhat unfortunately, no record remains of Inverness Castle as it was in the time of King Duncan. The fort that existed at this time was razed to the ground in the 11th century and has since been replaced with various structures. That which currently stands in Inverness was built in the nineteenth century in order to replace the castle seen above, constructed in the sixteenth century and destroyed during the Jacobite uprisings. As a result, this is the best source for Inverness Castle’s historic look that exists and, while it may not be the right castle to house the events of Macbeth, a little embellishment never hurt the Bard and so games designers should be able to indulge a little too.

Inverness Castle and the narrative of Macbeth provide rich pickings for video games. Castle based cerebral horrors, filled with mind games and hallucinations, perhaps like the Gamecube’s, Eternal Darkness, are one way a Macbeth inspired game could play out. Indeed, there are so many fantasy-RPG elements to the story of Macbeth, including witchcraft, other-worldly sieges and more, that a journey of character upgrades and branching choices would also fit well (although for the sake of longevity it might be worth making sure the player has to kill King Duncan…). Of course, for those of you who are more excited by the platform genre, the view of Inverness Castle above would also lend itself to a Castlevania or Ghosts n’ Goblins style adventure. The choice is yours.

For some further inspiration you can also look to the Hamlet inspired game, Elsinore, which currently forms part of the Library's Shakespeare in Ten Acts exhibition. Do remember though, if you are planning on entering the competition it’s time to get cracking with implementing your designs. The deadline for submission is rapidly approaching, with 1st July only just over a month away. Good luck!