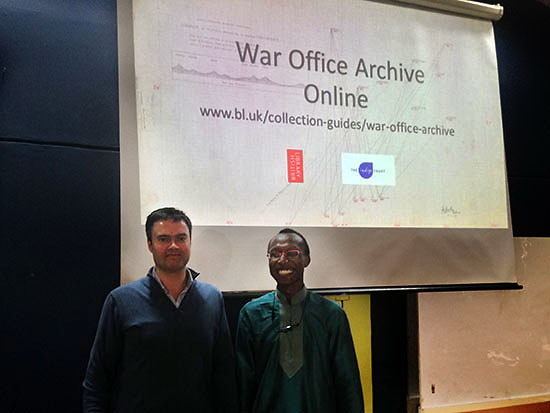 In 2014 the British Library received funding from the Indigo Trust to catalogue, conserve and digitise almost 600 colonial-era military intelligence maps of the former British East Africa, part of a rich historical resource held at the library in the so-called War Office Archive. The project was completed last year with a modest underspend, which was put towards promotion and marketing of the project in East Africa itself. As the cataloguer and co-ordinator of the project, I recently travelled to Nairobi to give demonstrations of the new online resource and to deliver talks about the archive’s rich potential for environmentalists and for researchers of African, colonial and personal history.

I spoke first at the British Institute in Eastern Africa, where the talk was recorded. The maps’ potential for use in academic study was well received by the audience. Joost Fontein, Director of the Institute, expressed an interest in discovering what the archive can teach us about the nature of colonial administration, and the role of mapping within it. Philip Winter, Director of the Rift Valley Institute, was keen to learn what the archive reveals of the history behind East Africa’s international boundaries, and how the archive might inform debate around this controversial subject today. And one doctoral student, who has located the temporary settlements of nomadic tribes from tell-tale patterns of vegetation growth seen on aerial photographs and maps from the 1960’s, was keen to use the War Office maps as a new source of data relating to an earlier period. 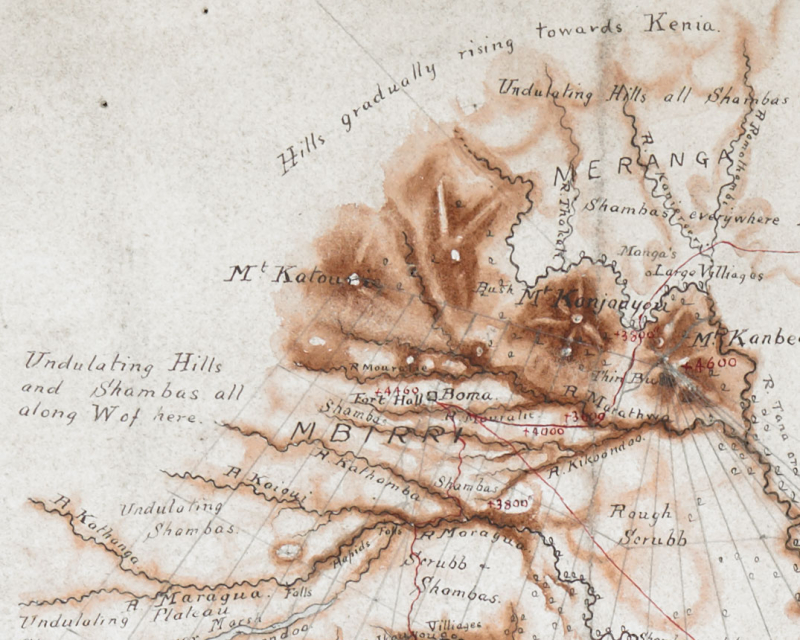 In the afternoon I travelled across town to i-Hub and a well-attended event there called PizzaFriday. i-Hub is an innovative and youthful space where Nairobi’s tech community meet to work together and share ideas. Current members’ ages range from 17 to 34. I was welcomed by Community Manager John Paul Karijo, whose work has included founding a not-for-profit startup that simplifies the process of enrolment in Kenyan graduate schools to an app on a mobile phone, bypassing the bureaucratic burden of paper forms and official stamps. I also met Jessica Musila, Executive Director of ‘Mzalendo, Eye on Kenyan Parliament’, a website that provides statistics and data relating to political transparency in Kenya, and Douglas Namale, a founder member of Map Kibera, a community mapping project in one of Nairobi’s notorious slum districts. Another young coder told me about his car-share app, which he hopes will help to reduce Nairobi’s chronic traffic congestion.

The community at i-Hub believed that the archive held great potential for local use and development - thoughts included integration of the maps into a historical storytelling platform, to include historical photographs of the region currently published on a Twitter feed, together with the archives of local Missionary Societies that might give a different perspective on the region from that of the British War Office - excellent ideas that prove the value of harnessing local knowledge.

I also spoke to Sophia Murage, who works in Kenya for a global digital mapping firm. She believes there will be strong local interest in geo-rectifying the War Office maps so that they can be overlaid onto modern map imagery for ease of comparison, and she added that there was also scope for the maps to be vectorised, enabling them to be fully discovered and manipulated with the latest GIS software.

These exciting possibilities perfectly fulfil the British Library and Indigo Trust’s intentions behind making the maps available for download from Wikimedia free of charge, even for commercial purposes.

But perhaps the most unconventional idea was put forward by the organiser of a charitable off-road jeep safari, who suggested the possibility of an event in which participants navigate across the landscape using only a War Office map from the 1890’s! Funds raised from the event would go towards local initiatives.