Above: a map of Manhattan from the US subset.

A funny thing happened last week as I noticed that the Georeferencer project's current phase had stalled around the 32% mark. Having checked on the project progress bar for a few days I decided we had lost momentum on the project, perhaps due to it being the summer holidays, personal commitments, a frustration with some of the content, or any other number of other reasons. Deciding I could not encourage more use without 'practicing what you preach' and getting stuck into the current cache of maps, I sat down in my breaks - for the first time in too long - to work through a chunk of the project using the lists of maps 'to be georeferenced' held on Wikimedia Commons.

After working my way through a number of maps I noticed two things. First off, progress on the Georeferencer project has not stalled, instead the counter on the front page has mysteriously stopped working (if you go there now you will still see it needs fixing). Instead, if you go to the 'Participants' tab you will see a different picture, one that suggests that, far from stalling, the project is actually charging along. At the time of writing 24,508 maps have been georeferenced, around 42% of what is currently in the system. The second thing I noticed was that I was hooked. Again.

Above: the route of the Pandora, from the Arctic subset.

Yes, despite the fact that there is no emergency or need to inspire more work on the system I'm still finding spare time to do 'just one more', the cartographic equivalent of computer gaming's 'One More Turn' syndrome. Now that I'm hooked I thought I would share some maps I georeferenced that worked out particularly well; the New York one lines up very pleasingly (grid systems make georeferencing much easier) while the map of the voyage of the Pandora satisfies my enthusiasm for Arctic maps, but, as usual, I have enjoyed working on every map I've done in this batch. I should probably back off a little now - not least as I have to sit down and write some talks around my new book - but I suspect I'll be dropping back in for 'Just One More Map' on a regular basis.

Thanks go out, as always, to our volunteers who are working through this large volume of material. We are making great progress here at the Library adding the data produced to catalogue records for the sheet charts, atlases and printed books that contain these maps and each newly georeferenced map means more useful data can be added to the catalogue. For those of you working on the project, don't forget about our lists of maps to be georeferenced over at Wiki Commons, they really do make the project more enjoyable - as I suggested in a previous post. For anyone reading this who wants to get involved in the project for the first time you can find out how here.

Posted by Philip Hatfield at 9:36 AM 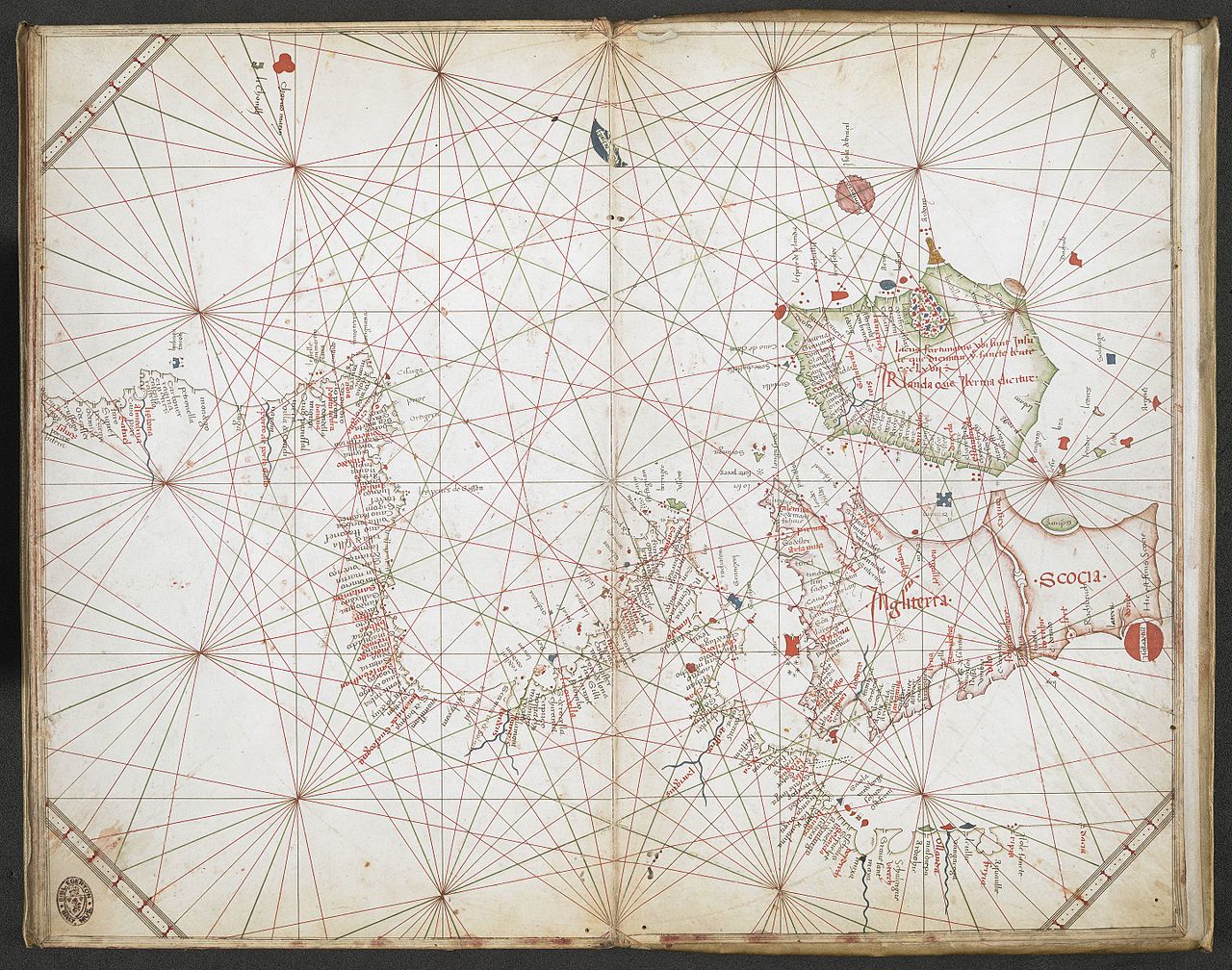 Above: Portolan chart of the North-West coast of Europe, including all of France, the British Isles and Ireland, Grazioso Benincasa [1473, Egerton MS 2855, f.8r]. File at Wiki Commons.

Over the past few years the British Library has been working with the Pelagios project, making innovative use of historic manuscript maps. Meaning ‘of the sea’ the name Pelagios is used as the seas were the highways of the ancient world, much like the Web provides a highway for communication today. A web-based project that facilitates the online linking of data about ancients sites mentioned, for example, in texts, local histories or where archaeological remains have been found. The current phase of Pelagios (in which the Library was involved) will soon be drawing to a close as the next phase, 'Pelagios Commons', begins and runs to December 2017. The Library has contributed digitised materials to phase 3 of this project, predominantly in the form of mappae mundi, itineraries and portolan charts, and these have been digitally annotated to open up the enclosed geographical information to the Pelagios database. 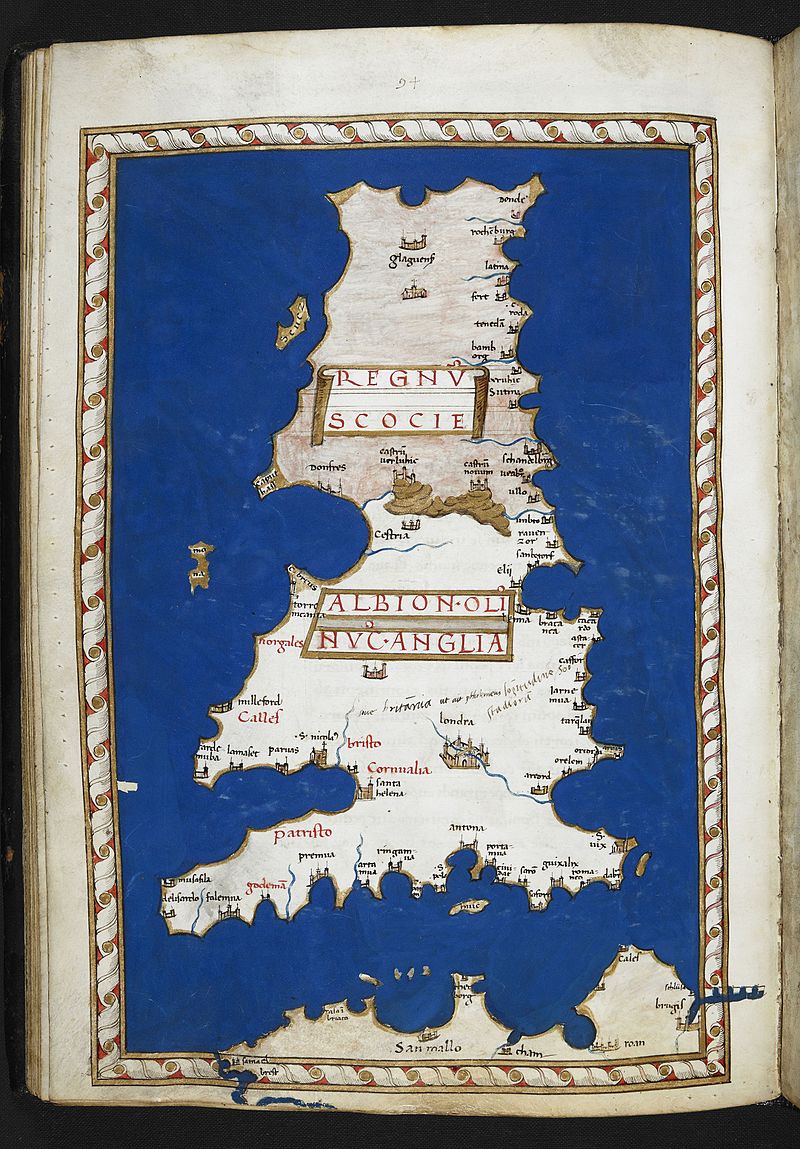 As you can see, the material provided to Pelagios is something of a treasure trove of manuscript views of the world and the project as a whole is composed of various wonderful resources detailed at Pelagios Commons. Now that our involvement with phase 3 of the Pelagios project is drawing to a close the Library is making the material it contributed to the project available on Wikimedia Commons and (soon) via data.bl.uk. The main root for material held on Commons can be found on the British Library Map Collections category page on Wikimedia Commons, which provides links to the various groups of British Library manuscript materials used in the Pelagios project (although I should note this is a general collections page - so you will not find Ordnance Survey Drawings in Pelagios!).

Above: General chart of the coasts of Europe, the Black Sea, the Mediterranean, and the western coast of Africa, Cornaro Atlas [1492, Egerton MS 73, f.36r]. File at Wiki Commons.

One health warning about these manuscripts, due to UK copyright law they are technically in copyright until 2039. However, given the age of the manuscripts and their place of production the Library believes it highly unlikely a public domain release will offend anyone; more information can be found here. Copyright notices aside, this is a fantastic resource which we hope you enjoy. If you do dive make sure you clear your diary and sit down with some food to see you through, it's a fascinating collection of material. If you want to know more about Pelagios generally - and perhaps join in - head over to their Commons site. Here you can access online resources that are being developed (using open data methods) to link and explore historical place, as well as participate in various community forums. You can also find more at the Digital Classicist Wiki.