A Journey to Bookland

The British Library has recently acquired a most appropriate addition to its map collection: a map of ‘Bücherland’ (Bookland), designed and drawn in 1938 by the German painter and illustrator Alfons Woelfle (1884-1951). 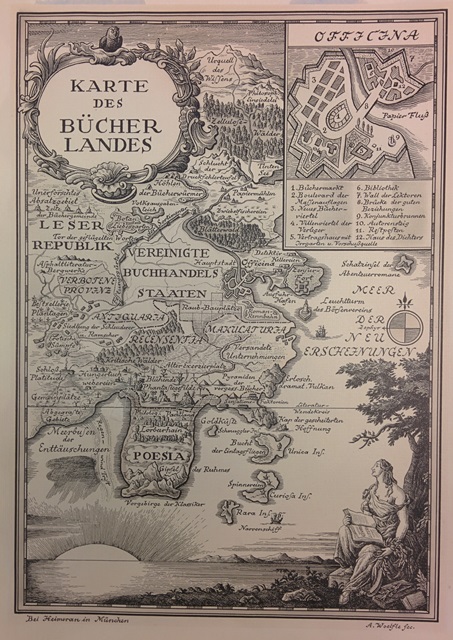 Woelfle’s map was specifically inspired by Johann Gottlob Immanuel Breitkopf’s fantasy map of an Empire of Love, ‘Das Reich der Liebe’, issued in 1777 to advertise Breitkopf’s method of printing maps with moveable type. Woelfle used the more conventional form of lithography, but took Breitkopf’s model of creating a fantasy land where the geographical features have an allegorical significance. 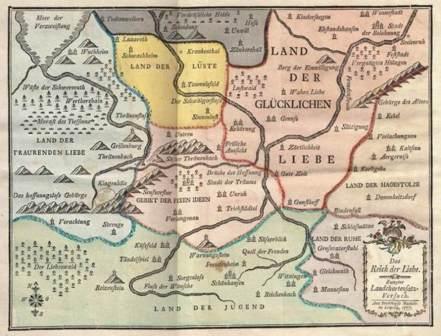 Together with his publisher, Georg Heimeran, Woelfle clearly had a wonderful time creating Bücherland, which represents the writing, printing, publishing, selling and reading of books through its witty geography. He also added decorative flourishes typical of Baroque design, such as the draped female figure in the bottom left-hand corner holding an open book. 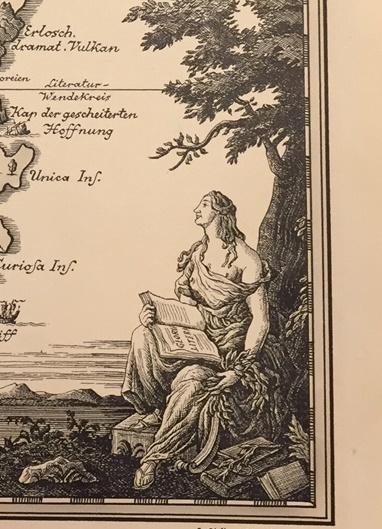 The capital of Bücherland is Officina (‘Printing-House’), in the Vereinigte Buchhandelsstaaten (‘United States of Bookselling’). A separate plan of Officina appears in the top right-hand corner of the map, highlighting such sights as the Boulevard of Mass Editions, the elegant Quarter of Publishers’ Villas and what is, perhaps surprisingly, the only Library in Bücherland. Outside the city the pirate publishers have their building plots. 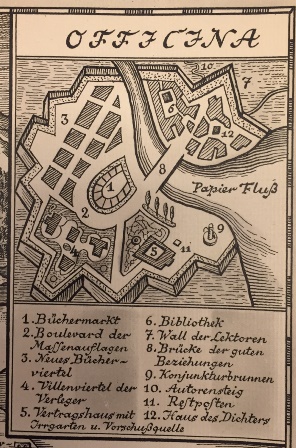 To the south lie Recensentia, where book reviewers no doubt lurk in the Critical Woods, and Makulatura, the region of waste paper, with its Pyramids of Forgotten Books and where even the Dramatic Volcano is extinct. By contrast, the lyre-shaped southernmost province of Poesia, just below the Tropic of Literature, boasts Blooming Meadows of Fantasy and a Laurel Heath; some fortunate travellers may even scale the Foothills of the Classics to reach the Summit of Fame, although the less lucky could find themselves sinking in the Gulf of Disappointments to the west or wrecked on the Cape of Failed Hope to the east. 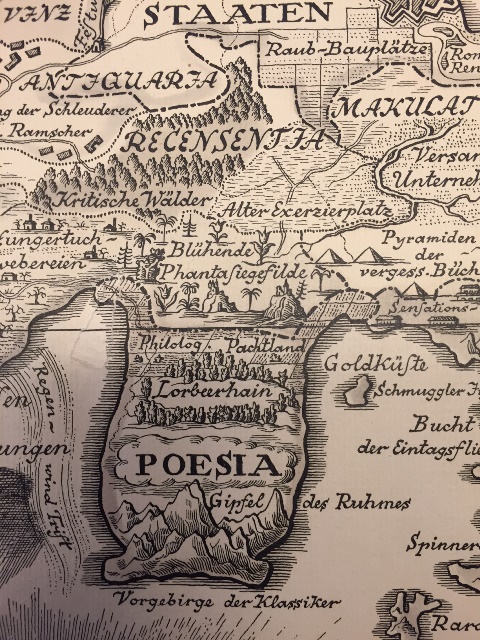 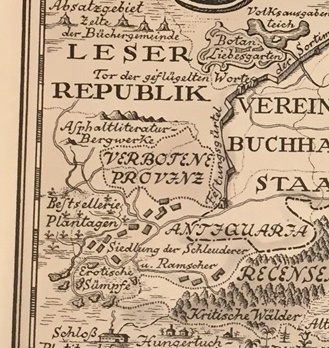 In the hills on the northern border of the Leserrepublik are the Caves of Bookworms; the map shows a giant worm emerging from one of them. Beyond is the northernmost region of Bücherland, where the Paper River rises at the Fount of Knowledge and travels through the Cellulose Woods, and the Lake of Ink, past the dangerous Ravine of Misprints, eventually reaching Officina and flowing out past Fort Censorship and the Lighthouse of the Publishers’ Association into the Sea of New Publications. Finally, those wishing to visit Bücherland’s islands can choose between Treasure Island of Adventure Stories and the little archipelago comprising the islands of Unica (with its Bay of Ephemera), Rara and Curiosa.

Although the world of books has changed in may ways since 1938, travellers in the Booklands of today will still find much to guide and entertain them in Woelfle’s map.