The long search for HMS 'Terror' 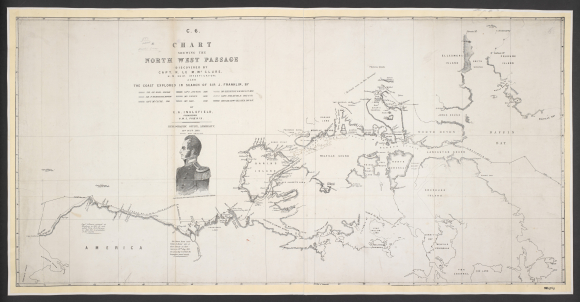 Yesterday The Guardian broke the news that, after over 160 years of searching for the ships commanded by Sir John Franklin on his doomed expedition, HMS Terror had been found in the Arctic. Submerged in Terror Bay, part of King William Island, the ship is in remarkably good condition and promises, like HMS Erebus, found in 2014, to provide further details as to what happened to Franklin and his crew in their final days. What the find achieves straight away is to provide an end to the search for these two ships, an endeavour which, during the nineteenth, twentieth and twenty-first centuries, has become a story all of its own.

Above: the men of HMS Resolute entertain themselves with a winter ball and on-ship theatre, from The Illustrated Arctic News [BL: 1875.c.19].

The search for HMS Erebus and Terror and the various stories, published accounts and maps which arose from this endeavour have become their own drama filled with shocking discoveries, perils and intrigues which have captivated imaginations across the world. This is the focus of the middle part of the upcoming book, Lines in the Ice: Exploring the Roof of the World, which predominantly uses the British Library's collections to shed light on the long history of this search. Sir John Franklin and those who travelled with him disappeared in the Canadian Arctic while searching for something that had obsessed mariners from England and Scotland for centuries, an Arctic trade route via the 'Northwest Passage'. During the resulting quest to find Franklin and his expedition many other crews wintered in the Arctic, men found ways to entertain themselves against both hardship and boredom, ingenious tools were used to search new areas and the Northwest Passage itself was crossed; albeit not in the way intended by those hoping to find a trade route in these Arctic waters. The maps and images displayed here are some of those produced in official and published accounts which arose from these expeditions and are reproduced in Lines in the Ice.

Above: ships involved in the Franklin searches wait for dawn and the end of winter. 'HMS Assistance and Pioneer in Winter Quarters' [Shelfmark: 1781.a.23].

Eventually these expeditions began to discover what happened to Franklin's crew, even if the ships themselves were not located, and the answers found were not to everyone's taste. During an overland search for the crews of HMS Erebus and Terror Dr. John Rae had encountered Inuit who told him that others in the area had tried to help white men who were heading south. These men, sick and close to death, and the camps they left showed signs that they had resorted to cannibalism to stay alive, something Dr. Rae reported on his return to England. This was met with indignation from many, not least Lady Jane Franklin and those she encouraged to write against Dr. Rae, notably the author Charles Dickens. Despite the rhetoric deployed against Rae and his Inuit informants their account has been shown to be correct by further investigation. However, to this day Inuit accounts of the fate of the expedition and the location of the ships have been treated with distrust by many. How fitting, then, that both ships have now been found in locations which Inuit histories long suggested searchers should investigate.

Above: the 'Boat-Cloak', praised by Dr. Rae as an essential tool for Arctic exploration. From Peter Halkett’s published description, Boat-Cloak or Cloak-Boat [1269.d.5].

Lines in the Ice is published by British Library Publishing (UK) and McGill-Queen's University Press (North America) and out now. As the book shows, the search for Franklin is well documented in maps, views and printed books around the world, the end of the story about the fate of the man and his crew, it now seems, will be found beneath the sea.

Posted by Philip Hatfield at 10:39 AM