An extremely famous 20th century map made its debut on this day 90 years ago. The illustrator E.H. Shepherd's map of Hundred Acre Wood was included on the endpapers of A.A. Milne's Winnie-the-Pooh. It would have been the first map many children would ever have seen, committing them to a life of cartographic wonder. 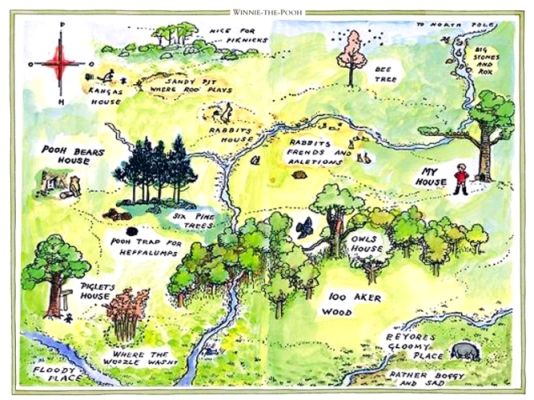 Shepherd's map is one of the most familiar fantasy maps of all time. But as Tim Bryars and I state in our History of the 20th Century in 100 Maps, each fantasy map contains an element of reality. 100 Acre Wood was inspired by Ashdown Forest in Sussex, near Milne's home and which Shepherd visited. It is possible to imagine that clump of trees at the centre of 100 Acre Wood  are still happily growing in that part of southern England.

See the first edition of this famous map in our forthcoming exhibition Maps and the 20th Century: Drawing the Line.

Fantastic Maps, a celebration of maps in fiction, is an event taking place at the British Library on 10 November.