As the opening of our major exhibition Maps and the 20th Century: Drawing the Line approaches, it is time to explain the background to the enigmatic globe that has begun appearing in posters and online. It is mysterious hemisphere with a more sinister message, drawn in pastel shades, with relief, place-names, and concentric rings emanating from the globe’s centre: Berlin. 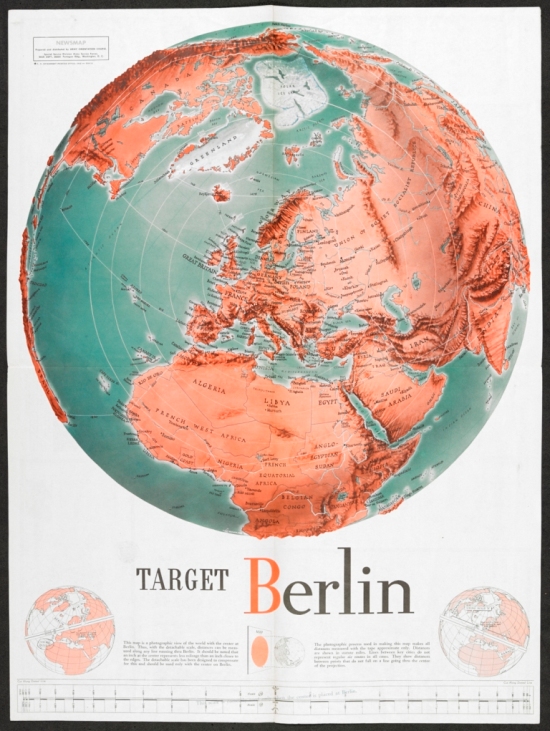 The globe is taken from a United States army poster of 1943 drawn by F.E. Manning and called Target Berlin. It was published in October 1943 when the Allies with the US Air Force had begun a more concerted programme of bombing German cities. Another poster, this time with Tokyo at the centre, was produced shortly afterwards. 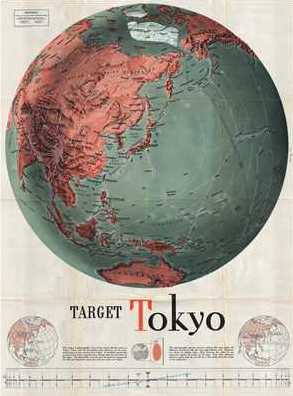 The poster includes a measuring rule which as explained can be used to measure the distance between any place shown on the map and the German capital. However, this was not intended as a navigational chart, but as a propaganda device. It placed Berlin at the centre of US soldiers and air crew minds and gave them confidence in the ruthless and scientific certainty of its destruction.

The Allied bombing of German cities, according to British Air Marshal Arthur ‘Bomber’ Harris, aimed at ‘the destruction of German cities, the killing of German workers, and the disruption of civilised life throughout Germany.‘ Bombing of civilians from both sides occurred throughout the war. They were some of the most controversial episodes of the 20th century, and many consider the line to have been drawn with them.