Today we are accustomed to using maps on our mobiles,  tablets and in our cars. The situation was very different a century ago. From roughly the end of the nineteenth century the growth in popularity of outdoor activities such as cycling and rambling and the increasing availability of cars and motorbikes allowed urban dwellers get away from their normal surroundings. In turn this changed the way people enjoyed their free time and how they used maps. It also represented a great business opportunity for map companies.

In this blog I look at the early commercial activities of Britain’s national mapping agency the Ordnance Survey, and how after World War I, it reshaped the way its maps were regarded by the general public through the use of artistic and colourful map covers.

The Ordnance Survey was founded in 1791 but with origins stretching back further. However, it was not until late 1890s that it started to publishing folded maps with covers. The design of these covers was basic: the first design was a title on red cloth card, which was changed to white later on, and still later a simple diagram of the coverage area was included on the cover. These designs were the same regardless of the scale of the map.

These plain map covers contrasted with the products of commercial map firms like Bartholomew and George Philip, whose maps (themselves based on Ordnance survey maps) had appealing and attractive cover designs.

Accordingly, when World War I ended in 1918, Ordnance Survey decided to market their small scale products better in order to increase sales and reach new customers. The attention was directed to map cover design. A professional artist, Ellis Martin, was appointed to create attractive illustrations for their tourist and district maps. Martin joined the Ordnance Survey in 1919. During the years that he was working he raised the standard of map cover art to high levels. 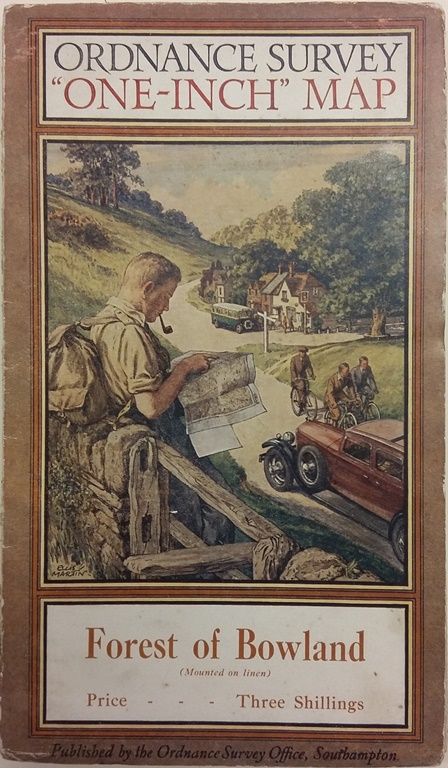 One of his most popular covers depicts a young man smoking a pipe leaning against a fence looking at an Ordnance Survey map. The scene is completed with cyclists, a car and a coach. This cover epitomises the period, emphasising how people from urban areas could enjoy their free time pursuing new leisure activities such as cycling, rambling or motoring with the help of maps. People peruse maps on other covers too, emphasising the universality of map use, maps as the perfect tool to enjoy their day out. 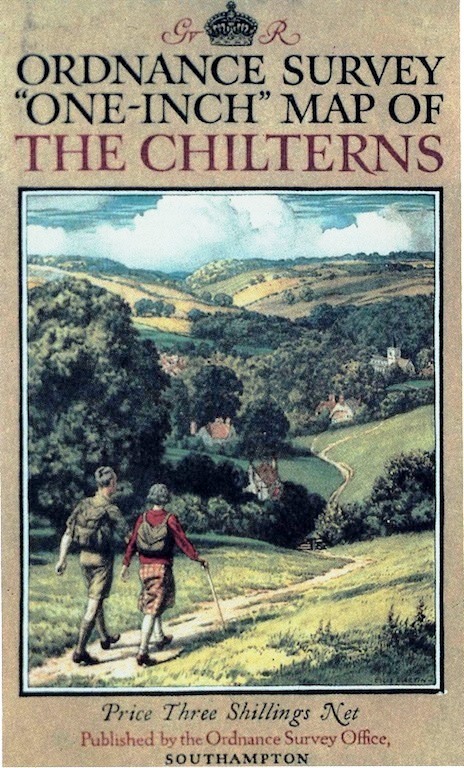 In another of Martin’s well-known covers we can see a couple walking through a valley. The design is so evocative that it makes you want to buy a map and go there. The inclusion of a woman enjoying outdoor activities illustrates how the role of women in society started changing after the First World War. Women appear in other similar maps cover designs, suggesting a modern touch from Ellis Martin artwork which is absent from other artists of the same period.

These two covers do not depict a particular place and so were used as the covers of maps of different parts of the country.  The next covers were designed for particular places depicting an identifiable landmark or symbol of that place. 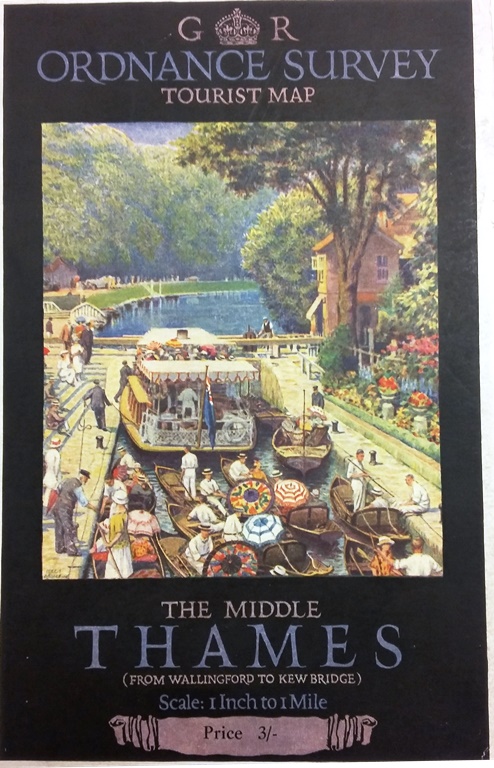 The cover for the Middle Thames is one of the best of its kind. It shows the river and elegantly dressed people enjoying boating in lovely weather. The whole picture resembles certain French Impressionist paintings in the use of light and the composition.  The artwork is so enticing that it could almost sell the map on its own!

One of the most unusual of Martin’s covers is the cover of a map of part of Britain produced for the solar eclipse of 27th June 1927. It is a unique and rare cover for a unique and rare event. On the cover the eclipse is depicted in a ghostly landscape in black and grey, which serves to recreate the atmosphere. This cover shows Ordnance Survey’s marketing acumen in taking advantage of the event, publishing a map with limited usability that became a souvenir and collector’s item afterwards. 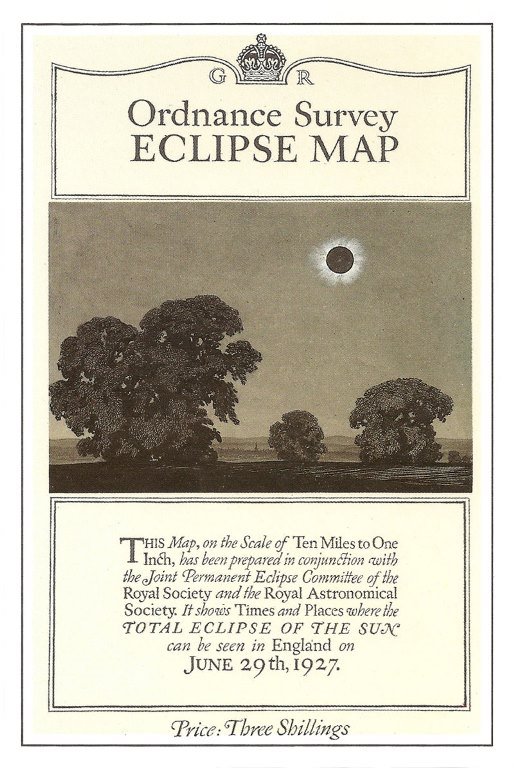 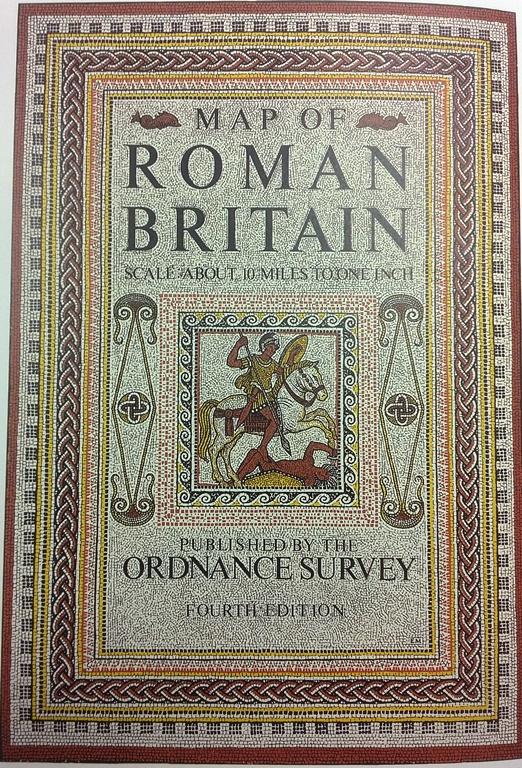 Another group of Martin’s covers are the Archaeological & Historical maps series. These include covers such as Seventeenth Century England (1930), Neolithic Wessex (1932) and The Trent Basin (1933). But the one that really stands out from the others is Roman Britain, first published in 1924 and reprinted in full colour in 1979. This is an excellent example of Martin’s attention to detail. This cover took advantage of the growing interest for ancient history in the early twentieth century. It encouraged the public to discover history on their doorstep.

Another great Ordnance Survey artist was Arthur Palmer. His illustrations tended to have an old fashion aura, more reminiscent of the Edwardian era than the roaring twenties when they were created. This can be seen even in the Art-Nouveau calligraphy that he uses, with asymmetric and elongated letters. This gives to his covers a special charm that made them very attractive to the public. 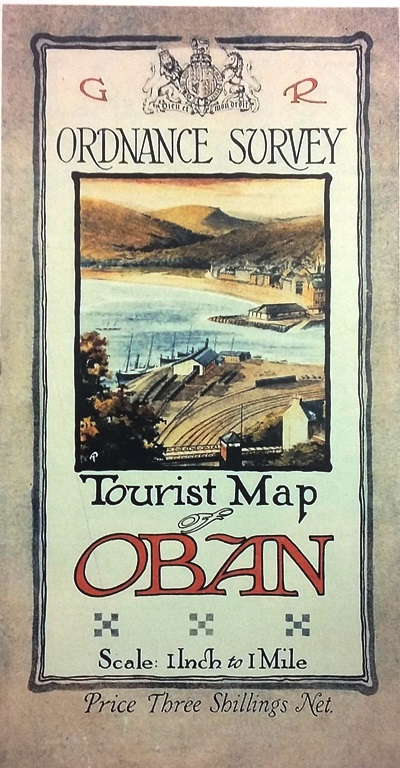 Arthur Palmer had a talent for landscape and architectural illustration. His first cover for Ordnance Survey was of Oban (1920). This cover was part of a series for Scottish tourist resorts. In other covers such as the one for Oxford (1920) and Liverpool (1924) we can see his skill for architectural drawing. 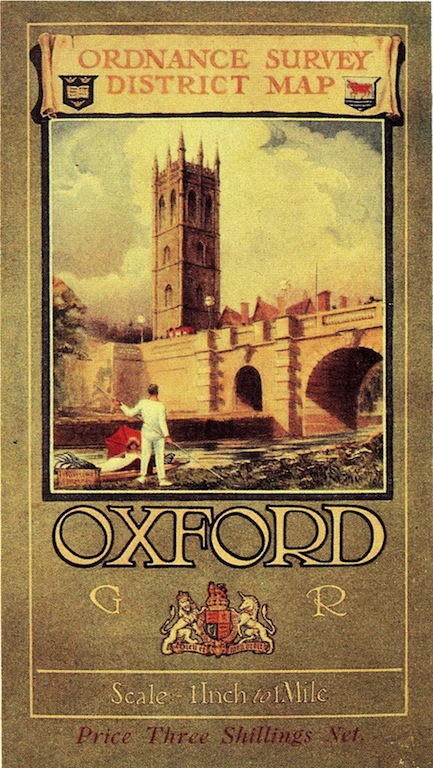 After World War II, Ordnance Survey redesigned its covers with designs that reflected the austerity of the post-war years. Since then, map cover designs have been more standard and less artistic and have arguably never again reached the high levels of artistic creativity shown during the inter-war years.

The British Library holds some of these covers. However many of them were discarded at that time. Perhaps it was felt that they were not important from the cartographic point of view with no regard to their artistic value. Nowadays, they have become collectors’ items and the value is arguably as much in the covers than the actual maps.

If you would like to see some of the covers you can contact the Maps Reference Team at Maps. See a number of Ordnance Survey covers on sdisplay in our current exhibition Maps and the 20th Century: Drawing the Line.