One of the first users of the new telegraph office in Lhasa was Brigadier-General George Pereira, who despatched this short message on 17th October 1922, in the course of an heroic journey undertaken in poor health at the age of 57.

As British Military Attaché in China from 1905 to 1910, George Pereira travelled widely throughout the country collecting geographical intelligence (much of which survives as maps in the War Office Archive at the British Library). Following his subsequent posting to Europe, he resigned his commission and returned to China as a civilian, journeying from Peking (Beijing) to north-west China, also to the region bordering on Burma, returning across southern China to Foochow (Fuzhou).

The First World War saw him back into the army as Lieutenant-Colonel. He saw active service on the Western Front, and retired with the rank of Brigadier-General at the end of the war.

In 1920 Pereira returned to China to pursue his lifelong ambition to journey to Lhasa. At the age of 55, and in failing health, he undertook his final, remarkable journey from Peking to India via Tibet, then back into China from Burma. Although he reached Lhasa he did not complete the return journey: having become seriously ill he died in October 1923 in western Szechwan (Sichuan) where he was buried in the Roman Catholic cemetery at Tatsienlu (Kangding).

He was not the first Englishman in Lhasa, as his telegram might imply, but he was the first to arrive after travelling through China, rather than the shorter route from India. The only other Europeans who had achieved this feat were Vincentian Fathers Huc and Gabet in 1846. 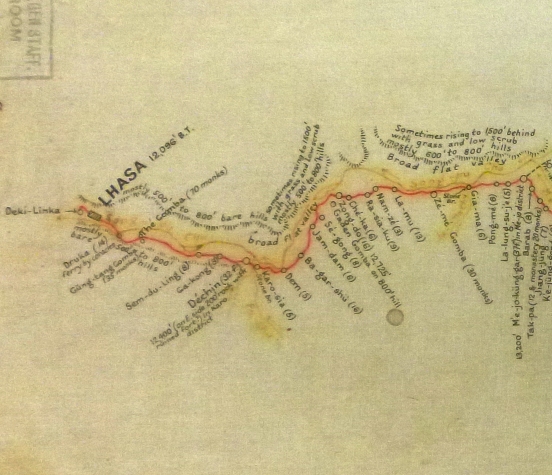 The map shown here is one of a contemporary set of 24 finely executed sheets covering this last journey, traced by M.I.4 (Geographical Section, General Staff) from sketches received from Brigadier-General Pereira. The maps show the wealth of local information systematically recorded by Pereira along the route.

From the War Office Archive, received from the War Office/Ministry of Defence in 1964 and 1989. The archive, covering the period 1890-1940, comprises manuscript material used for the compilation of strategic and tactical cartographic intelligence product. There are 1,428 archival files made up of 7,253 map sheets and 5,015 pages of text.