In this exclusive guest post, map historian John Davies introduces one of the most enigmatic of 20th century map genres.

'The story of Soviet military mapping is the story of a massive secret project, spanning the fifty years of the Cold War period – from the 1940s to the 1990s – and involving thousands of people. It’s the story of the world’s largest mapping endeavour and, arguably, the world’s most intriguing maps.

The story of this amazing enterprise has never been told in full in print and the maps themselves have rarely been publicly displayed. One of them, however, the city plan of Brighton on England’s south coast is on show in Maps and the 20th Century: Drawing the Line.

The full extent of the project will probably never be known, but it is safe to say that almost the entire land surface of the globe was captured on topographic maps at scales of 1:1 million and 1:500,000. Huge areas of the Americas, Europe and Asia were mapped at 1:200,000 and 1:100,000, whilst maps at scale of 1:50,000 (the same as the familiar Ordnance Survey Landrangers) cover much of Britain and continental Europe. On top of that, the vast territory of USSR itself was mapped at 1:25,000 (the scale of Ordnance Survey Explorer maps) and much even at 1:10,000.

The topographic maps have sheet boundaries corresponding to lines of latitude and longitude. This means they are non-rectangular, the two sides narrowing towards the top in the northern hemisphere. The sheets are non-overlapping and are identified by a reference number that uniquely identifies the global location and scale of every sheet.

It works like this: each 1:1 million map is a quadrangle which covers an area of the globe four degrees of latitude deep and six degrees of longitude wide. The latitudinal bands are alphabetic, starting with A at the equator and increasing as you head north; the longitudinal zones are numbered 1 to 60. The Greenwich meridian (longitude 0) defines the boundary between zone 30 and 31; London, at latitude 51, lies in band M (the 13th band, spanning latitudes 48 to 52). London west of Greenwich, therefore lies in quadrangle M-30 and east of Greenwich in M-31. 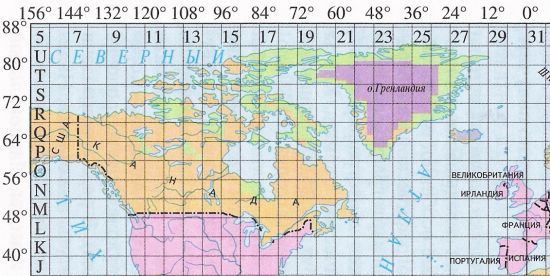 International Map of the World nomenclature adopted by Soviet Union, with lettered bands of 4° latitude and numbered zones of 6° longitude

This convention, known as IMW – the International Map of the World – nomenclature was devised originally by Albrecht Penck at the end of the 19th century and was adopted in 1913 for a proposed international cooperative mapping project.  Although that project fizzled out, the USSR made use of the same convention and did succeed in mapping the whole world by the mid-20th century. 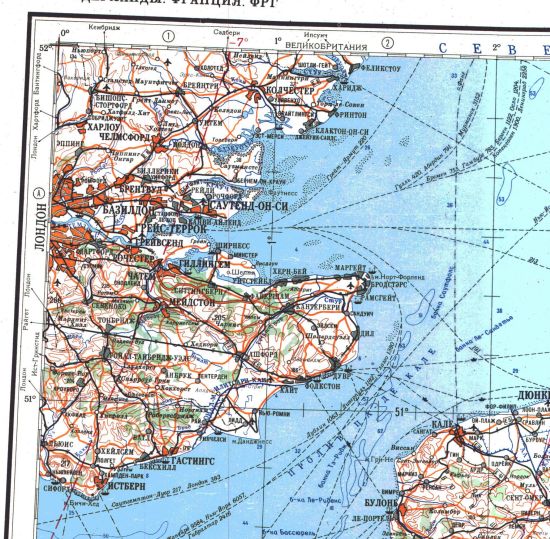 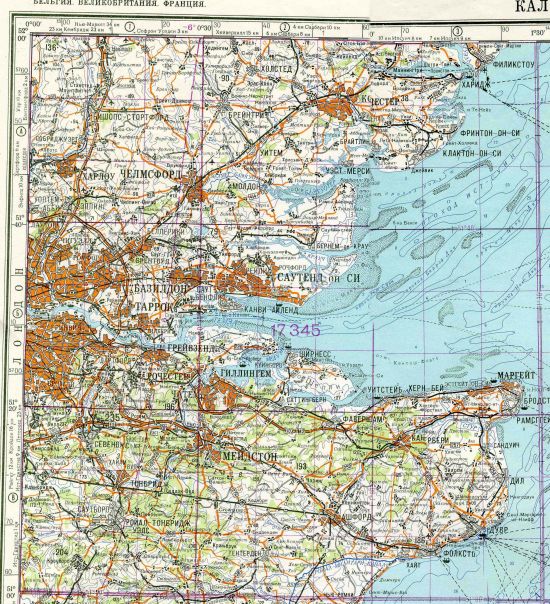 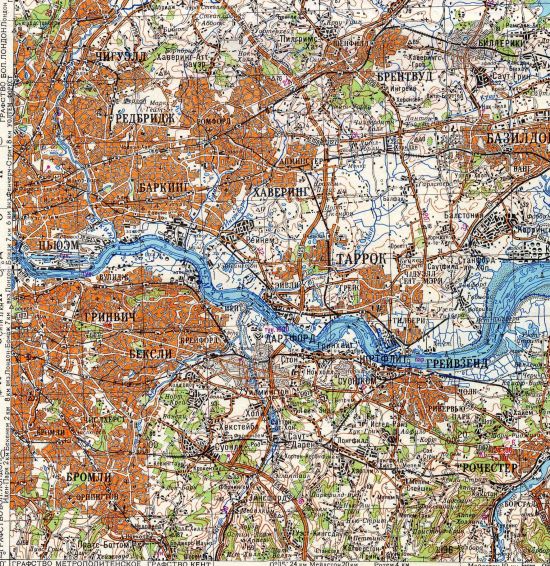 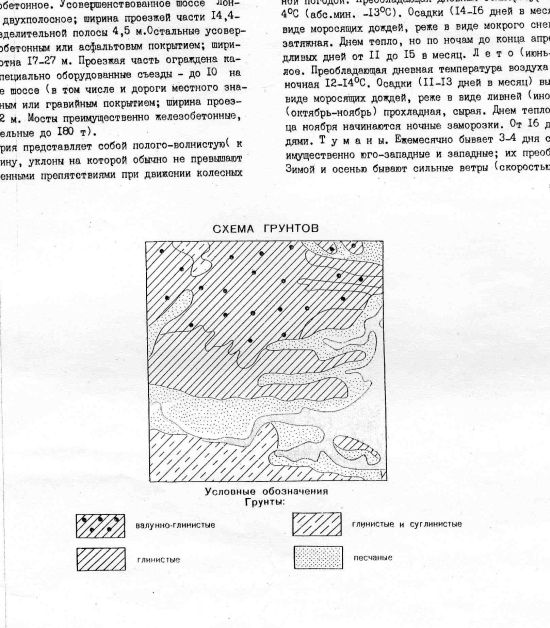 The reverse side of the 1:200,000 series sheets has a comprehensive essay describing the physical, social, economic and industrial importance of the locality, together with a geological sketch map. 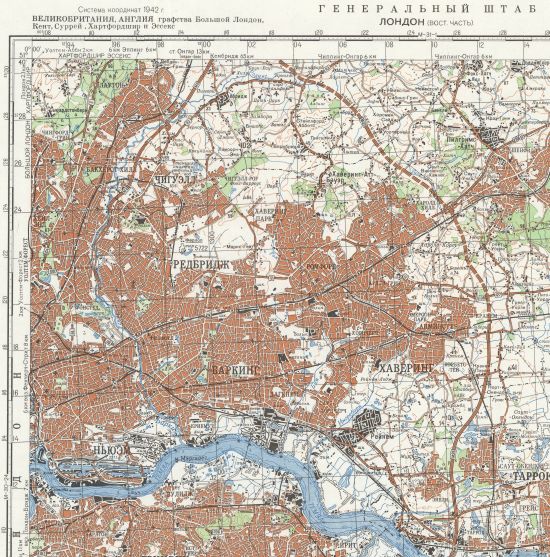 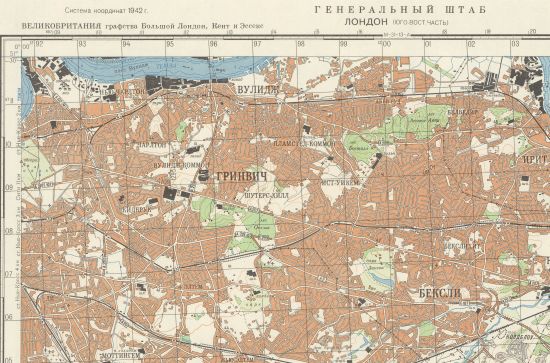 The projection used is the Gauss-Krüger (G-K) projection, based on a regular system of Universal Transverse Mercator projections that each cover a zone 6 degrees wide, with central meridians (axial lines of longitude) at 3 degree intervals. The advantage of this is that it simplifies the depiction of the globe as a flat surface for relatively small areas and allows the use of a rectangular grid within each zone. The grid provides accurate geographic co-ordinates to facilitate precise artillery targeting.

Even more remarkable than the topographic maps are the city plans. These are known to exist for about two thousand cities worldwide, and there may have been many more. City plans are to a large scale, either 1:25,000 (two-and-a-half inches to the mile) or 1:10,000 (about six inches to the mile), and show an altogether much greater level of detail, including street names and listings of factories and their products, public buildings and transport facilities – even relatively unimportant (certainly non-military) objects such as bus stations and post offices. They are classified ‘Secret’.

City plans are rectangular, being based on G-K projection with a central meridian near to the city. The sheets themselves vary in size, but are typically about 1,000 mm by 800 mm, and may be oriented as portrait or landscape layout to suit the terrain to be covered. Many cities require several sheets (in Britain, typically two or four; in USA, Los Angeles requires 12 sheets and New York 8). Unlike the topographic maps, in which the coverage is continuous and non-overlapping, city plans are individual, specific sheets, centred on a particular city; in some cases, such as the conurbation of West Yorkshire, the plans of several cities overlap.

About 100 British and Irish cities are known to have been mapped in this way, several of them more than once. Halifax, Luton, Cambridge and Cardiff are just some of the places for which maps of the 1970s and again of the 1980s exist. The later editions are entirely new productions, rather than revisions of the originals.

The coverage of British cities includes not only the major industrial and commercial centres and important seaports and naval bases, but relatively rural and less strategically significant places such as Gainsborough and Dunfermline (although Rosyth Royal Naval dockyard is not far from Dunfermline, it is not included in the map coverage).

The information depicted on city plans is derived from a wide variety of sources and includes detail not normally seen on local street atlases. For example, the 1990 Brighton 1:10,000 plan seen in Maps and the 20th Century: Drawing the Line shows signals alongside the railway line, annotates the shoreline as having a mean tidal range of 4 metres, differentiates the vegetation types in parks and open spaces and identifies the ownership of facilities such as motor repair depots.

City plans have a street index, a descriptive essay and a list of ‘important objects’. numbered and colour-coded on the map – purple for administrative buildings. black for industrial and green for items of military importance. 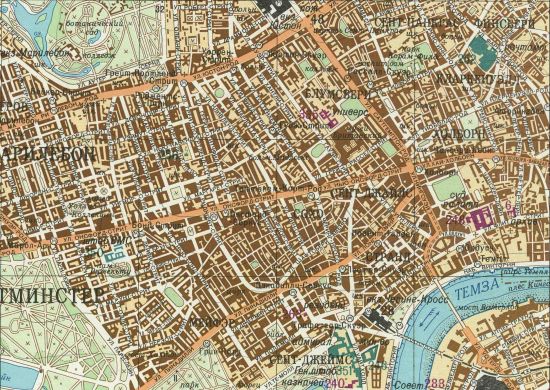 Note also the depiction of tube stations (symbol M), arrows showing direction of flow of the Thames and direction of tides, Kingsway tunnel and symbols indicating lawns in Hyde Park. The river name is in upper case lettering, denoting that the river is navigable. None of this information appears on contemporary Ordnance Survey maps] 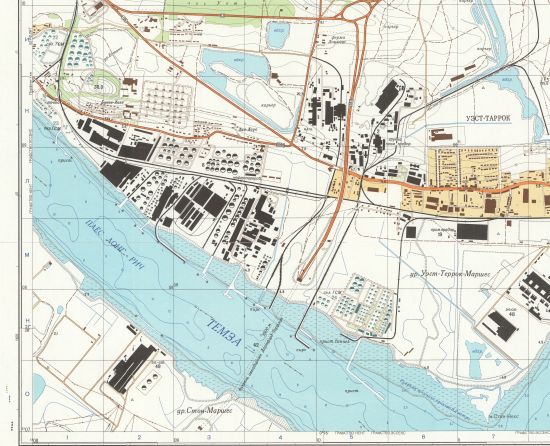 All the maps described above, the topographic maps and the city plans, were produced by VTU, the Military Topographic Directorate of the General Staff of the Soviet Army and are headed ‘General Staff’.  They carry in the bottom right-hand corner a print code, defining the map type, when it was printed and at which of the twelve print factories spread across the USSR.

Neither has a simple answer.

Copying from Ordnance Survey maps, for example, is an obvious possibility. However, the wealth of information shown far exceeds what could be derived from these.  Analysis of the information shown on Soviet maps and plans proves that the compilers and cartographers had access to a huge range of published maps and guides. They include commercial street atlases, geological maps, transport maps and timetables, trade directories, tourist guides Admiralty charts and many other sources. Although these would have been freely available in Western cities, it is surprising to see just how wide the net was cast and intriguing to consider the process by which material was gathered and transmitted to USSR.

Even more surprisingly, the sources include items which had been published many years previously, resulting, for example, in the maps depicting ferries alongside the bridges that superseded them and long-disused railway lines being shown as operational.

After the launch of Zenit satellites in 1962, aerial imagery became a significant component in the data sources and can be seen in many cases where new roads and housing estates, for example, which had not yet appeared on Ordnance Survey maps, are shown on Soviet maps. Often these have the street names omitted, indicating that the cartographer had only the aerial image to hand and not the latest street directory.

As to why so much time, effort and money was expended on this gigantic project for over fifty years, we can only speculate. The concentration on depicting civil rather than military information suggests that these were intended not as invasion maps, but as necessary tools to manage and control the economic and industrial activity of Western cities after their eventual peaceful conversion to communism. But who can say?

Wasn’t the West doing the same thing during the Cold War?

Of course, mapping the territory of a potential enemy was nothing new and not restricted to the Soviet Union. But during the Cold War, the West, generally, was far more selective about where they mapped and what they showed. Whereas the Soviet Union produced huge numbers of city plans, each of which shows minute detail of all aspects of a city (regardless of military significance), the West tended to focus on places of particular interest – and included on their maps only what was relevant to the purpose. 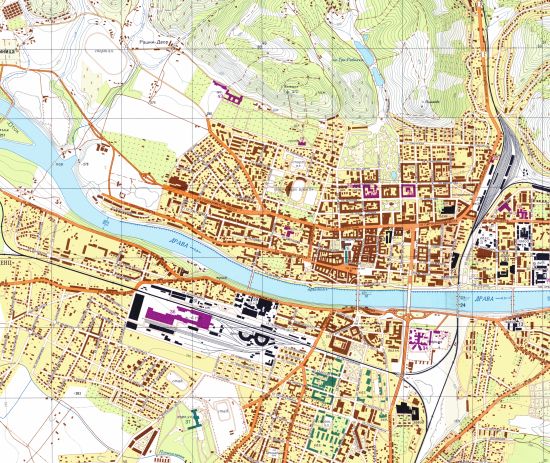 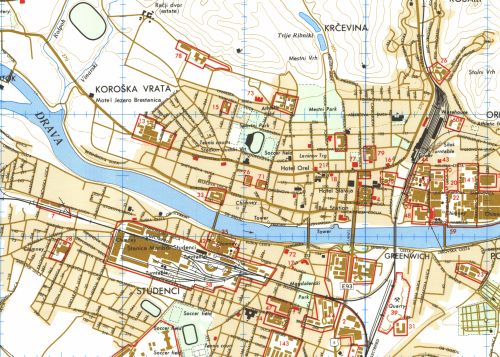 John Davies is editor of Sheetlines, the journal of Charles Close Society for the Study of Ordnance Survey Maps (www.CharlesCloseSociety.org) and is co-author with Dr Alex Kent of The Red Atlas: How the Soviet Union Secretly Mapped the World, to be published by University of Chicago Press in September 2017 (http://redatlasbook.com/)