Shoreditch according to Goldfinger

A remarkable new acquisition has arrived! Planning your neighbourhood  is a proposal on twenty display boards for post-war reconstruction produced by an architect Ernő Goldfinger and Ursula Blackwell in 1944 for the Army Bureau of Current Affairs. 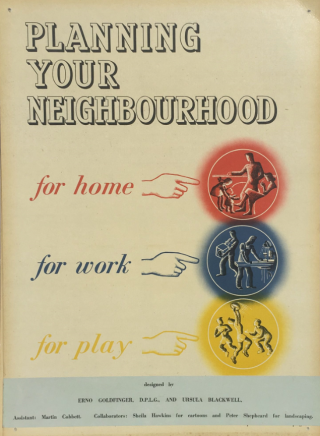 Goldfinger, educated in Vienna and Paris, played an important part in the development of the modernist movement in Britain. His appreciation for the Brutalist style and unconventional designs (including the Alexander Fleming House at Elephant and Castle, Balfron Tower at Poplar, and Trellick Tower in west London) often upset the general public. Allegedly, the author Ian Fleming, who was Goldfinger’s neighbour in Hampstead, was so opposed to the design of terraced houses in Willow Road, that he named one of the James Bond novel villains after the architect.

Planning your neighbourhood captures an air of optimism in which the designer presented the utopian vision of improved post-war city life. The district of Shoreditch in East London, heavily damaged through enemy actions and “overcrowded and disfigured by slums”, was a perfect candidate for post-war reconstruction. The proposal incorporates maps, aerial photos and diagrams to visualise the concept of comfortable modern housing that caters for all. The idea was that anyone, young and old across different social classes, would enjoy living in the “vertical city”. 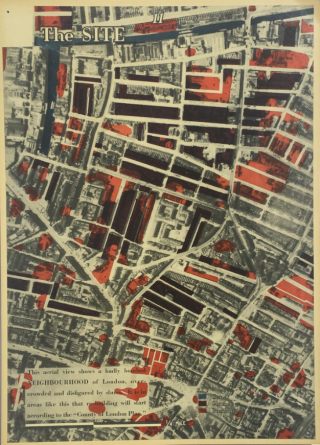 Aerial view of the damaged site in Shoreditch. Board 11. Planning Your Neighbourhood. British Library Maps C.49.e.82.

The set opens with a comparison of country and city life stating that in towns “the advantage of neighbourliness is lost”. The solution suggested by Goldfinger is the creation of neighbourhoods composed of residential units, in line with principles of planning concept introduced by Sir Leslie Patrick Abercrombie and John Forshaw in their Greater London Plan, which promoted development of self-contained communities.

Goldfinger’s scheme advocates vertically built cites over traditional outward expansion. He compared a footprint of a tower block against a street of terraced houses, demonstrating the advantage of the modern approach. 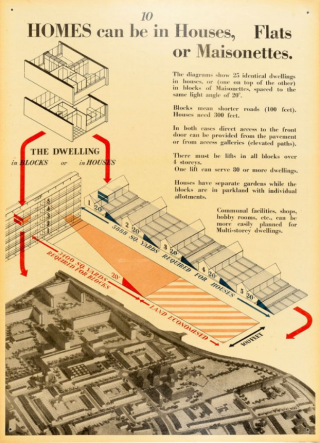 The importance of planning is strongly emphasized, with the planner having to carefully consider a design which allowed for different sized apartments, depending on individual family needs, and appropriate amenities located nearby. Goldfinger also thought about green spaces and recreational facilities such as local cinemas and swimming pools, playgrounds, cricket and football grounds – all conveniently situated in the centre of the neighbourhood within an easy reach from home. Also, with safety in mind, he introduced the idea of segregated traffic with high speed roads exclusively reserved for heavy vehicles (including buses and trucks), and slow roads for horse carts, bicycles and pedestrians providing safe access to nurseries and schools with no crossing of traffic required. 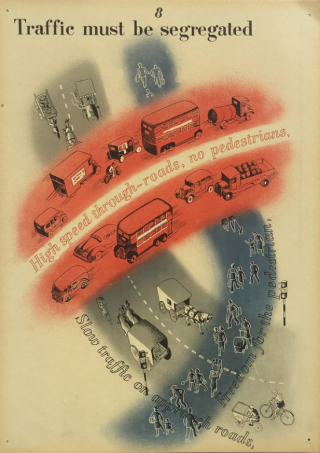 The reconstruction of post-war Britain was less ambitious than Goldfinger estimated and his Shoreditch scheme was never built. One could argue it was realised on a ‘mini scale’ as Trellick Tower Cheltenham Estate in west London completed in 1972 with its own doctor surgery, nursery, school, laundrettes, and shops. Loved or hated, it became one of London’s landmarks and has been given Grade II listed status by English Heritage.

By the mid-1970s concrete tower blocks were no longer perceived as a model for urban regeneration. What originally was intended to provide a solution to the housing problem and growth of a healthy strong community in reality became the main factor for social alienation, crime and creating serious safety hazards.

Unfortunately Planning your neighbourhood was acquired too late to be included in our Maps and the 20th Century: Drawing the Line exhibition held in November 2016 to March 2017 but the set is available for ordering through the online catalogue.

Posted by Magdalena Peszko at 12:45 PM