For many of the thousands of British men and women who ventured abroad during the eighteenth century, travelling to Italy was the highlight of the trip. To some it was even considered an essential activity for any aspiring socialite or person of culture. In the words of Dr Samuel Johnson, “A man who hath not been in Italy, is always conscious of an inferiority, from his not having seen what it is expected a man should see”.[1]

Sir Bourchier Wrey (1714/15–1784), who travelled around Europe in the mid-1730s – including a sojourn in Italy – came up with a novel way of commemorating his time there: he decided to commission a map of Rome.[2]

The map in question is John Rocque’s A plan of Rome… (see fig. 1) published in 1750 – of which there is a fine copy in King George III’s Topographical Collection.[3] 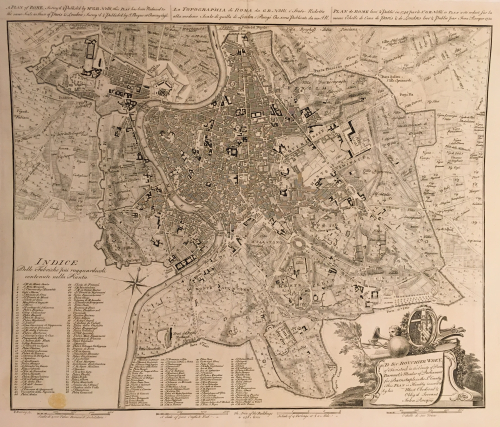 We can tell that Wrey was involved in the production as there is a decorative cartouche dedicating the map to him in the bottom-right corner (see fig. 2). Fig. 2: Detail of John Rocque, A Plan of Rome, (London, 1750), showing the decorative cartouche that dedicates the map to Sir Bou[r]chier Wrey.

With an eye for sales, Rocque catered his map to potential grand tourists: he has highlighted certain buildings and sites that had architectural or antiquarian interest with deep scoring, so they stand out in black (see figs. 3 and 4). 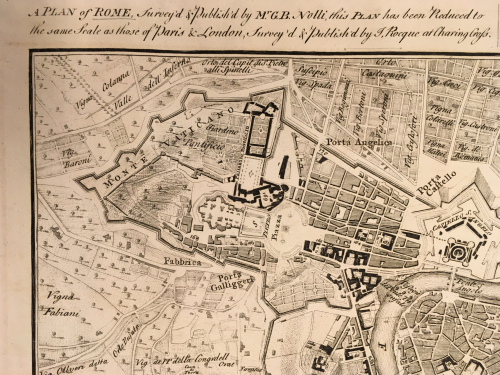 Fig. 3: Detail of John Rocque, A Plan of Rome, (London, 1750), showing the title and the area around St Peter’s Basilica. 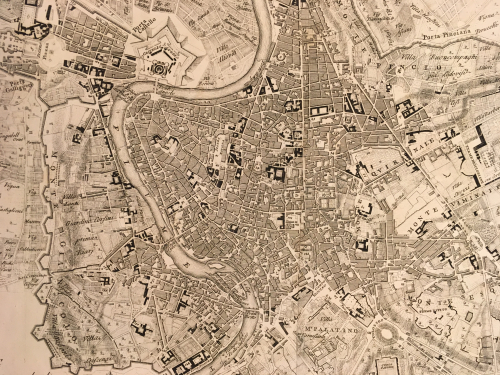 This innovation would have made the map immediately more useful and alluring to travellers. These highlighted areas, which comprise the numbered locations of the index, are far more easily identifiable than if they simply were marked with numbers.

Rocque was one of London’s most successful mapmakers of the eighteenth century and this plan of Rome followed in the wake of his other city maps, such as those of Berlin (1745), London and Westminster (1746), and Paris (1748).[4]

On another level, however, this map speaks of the immense personal and societal impact of the Grand Tour.

Wrey had returned from travelling over a decade prior to the date of publication. This interval demonstrates that the effects of Wrey’s experiences abroad did not conclude when he first set foot back on English soil. Rather, his Grand Tour still had powerful enough meaning for him to want to assist Rocque in publishing this map.

But aside from seeing this map as a personal memento for Wrey, we can also recognise its wider social value. With this map Wrey was making a carefully constructed public expression of his own identity. By patronising a map of Rome, the traditional pinnacle of the Grand Tour, Wrey was showing off both his cultural and historical sensibilities and his appreciation of the science of mapping. 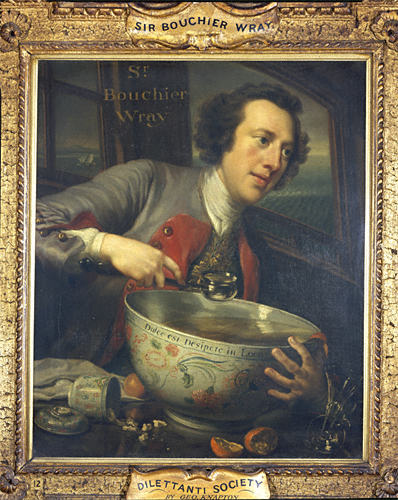 Fig. 5: Sir Bourchier Wrey’s portrait for the Society of Dilettanti, by George Knapton, 1744, showing him dishing up some punch from a classicised bowl inscribed with Horace’s phrase “Dulce est Desipere in Loco” – “It is delightful to play the fool occasionally”. (Wikimedia Commons, Source/Photographer: J. Paul Getty Trust)

What’s more, Wrey was an active member of the Society of Dilettanti, whose objective was to promote knowledge of classical antiquity (and the members certainly had fun whilst doing so – see fig. 5).[5] Finally, as this map marks an important update on the cartography of Rome for a British audience, we can detect Wrey’s intention to make Rome more accessible to grand tourists.

What better way is there to remember your own travels than to put your name on the map?

Jeremy is undertaking an AHRC collaborative PhD with the British Library and Royal Holloway University of London on Maps and the Italian Grand Tour.

[5] For an overview of the activity and achievements of the Society, see Redford, Bruce, Dilettanti: The Antic and the Antique in Eighteenth-Century England, (Los Angeles: The J. Paul Getty Museum, 2008).

Posted by Magdalena Peszko at 3:44 PM