We are pleased to introduce this guest blog post by Dr Dorothea McEwan.

Ethiopia is the product of a long historical process, from the Aksumite empire 2000 years ago, then the introduction of Christianity in the 4th century, the political expansion of various ethnicities, the centuries-long artistic development of rock churches, followed by Portuguese military and Roman Catholic religious intervention in the 16th and 17th centuries, and finally the unification of the country under emperor Tewodros ll (reigned 1855-1868).

Europeans have travelled in the country and written about their experiences adding to this geographical knowledge by drawing maps of the  routes of their travels, like the Scotsman James Bruce, who published his account in 1790. In 19th century Europe the growing importance of geography as an academic discipline led many travellers to create maps, which they sometimes complemented with potted histories of the lands, the turbulent political times and customs and mores of the populations. 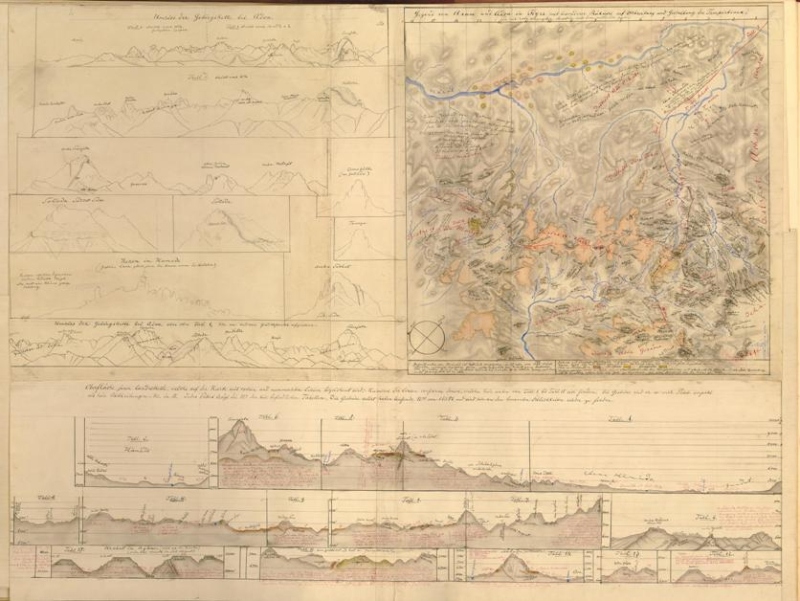 Map of Axum und Adoa. Add ms 28506, f. 17. This is the Aksum and Adwa Region in Tigre, concentrating particularly on how far the clay plateau extends and on its configuration (shown here in red which is also more or less its natural colour ‘).

One such traveller was the German botanist Georg Wilhelm Schimper (1804-1878), who lived and worked in Ethiopia from 1838 to his death in 1878. He witnessed upheavals and wars, the coronation of Emperor Tewodros II in 1855, married and had children with Ethiopian women, but most notably, he criss-crossed the country to research the flora of the country. He sent the dried botanical specimens back to Germany and France and made a living out of it courtesy of travel associations like the Esslingen Reiseverein which advanced money to Schimper and recouped it from the sale of his dried plant specimens to European herbaria.

When this income dried up, he was lucky enough to be appointed as regional administrator in Enticho, Northern Ethiopia, until 1855. In the 1860s he was engaged in something totally new: because of his detailed knowledge of the plant life in various regions, dependent as this was on the differing soils and rock formations, he proceeded to integrate geological information onto maps that he drew himself, accompanying the maps with plentiful and detailed botanical, geological and geographical observations.

He produced four manuscript maps, held by the British Library at Add. MS 28506. The maps and accompanying commentaries by Andreas Gestrich, Dorothea McEwan and Stefan Hanß have been published by the German Historical Institute London, and are online here. The database presents 221 folios of the original German pages, transliterated in modern German and translated into English, with a fully annotated bibliography and biography of Schimper. 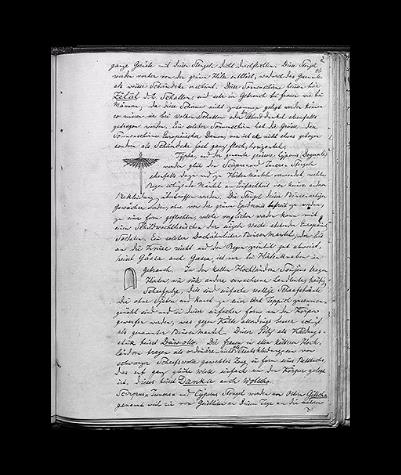 (BL Add ms 28505, f. 86r) This folio is wonderfully illustrated with little sketches of parasols and rain ‘coats’ worn by local people together with the following explanation:

'The Scirpus and Juncus, known as Saddi, usually growing on the banks of brooks or otherwise in quite marshy places, and some slender Cyperus, called Gadima, which grow there too, are used for parasols and shepherds’ cloaks. The parasols are made from the stems of these plants in the following manner: A few inches below the thicker end of a normally three to three and a half ft. long stick or reed, four thin rods are first attached as spokes. Their thickness and length are more or less the same as the whalebone of the parasols of European ladies. Then the stems of these plants are used to weave a small flat disk around these four spokes lying right up against the stick. Next a number of other spokes are woven into this disk, which, in the gaps, gets double stem reinforcement. Now the whole framework is tightly interwoven, snake-like with these stalks.

These stalks are first stripped of their green outer skin, making the whole thing look like a white shade. These parasols are called Zelal here, meaning ‘shade’, and are very much in use by women as well as by men. As these parasols cannot be folded they have to be carried around even when it is cloudy or in the evening at dusk. These parasols are the same size as the parasols carried by European ladies, but they are not slightly curved. They have an almost completely flat, horizontal parasol top.

Typha, and the larger Cyperus (Doguale) are also used, just like the Scirpus and Juncus stalks, for this purpose and for making shepherds’ cloaks. It would be impossible to find a better or simpler coat to protect you from the rain. The green outer casing of the stalks of these reed-like plants are left on, and then they are woven into a shape like the guardhouses of European soldiers on individual sentry duty. This kind of reed coat, like a roof, reaching to the knees and repelling rain quite well, is called Gassa, and is only used by shepherd boys. In the cold highlands of Semien, shepherds often wear sheepskins, like other adult country folk.'

You can access George Wilhelm Schimper in Abyssinia: Observations on Tigre, go to  http://exist.ghil.ac.uk:8079/Schimper/biography.html