In my last blog I noted how John Rocque’s 1750 map of Rome could be considered both a personal memento for the grand tourist who likely commissioned it – Sir Bourchier Wrey – as well as a useful map for travellers.

My post today will look at events surrounding the production of Rocque’s map of Rome. The ensuing story reveals this London mapmaker to be a rather ruthless opportunist… In 1748 the Italian cartographer Giambattista Nolli produced a landmark map of Rome. It came in two sizes: a monumental twelve-sheet map entitled Nuova Pianta di Roma, and a reduced single-sheet version called La Topografia di Roma. Scholars sometimes refer to them respectively as the Pianta grande and the Pianta piccola for short, and copies of both can be found in King George III’s Topographical Collection. 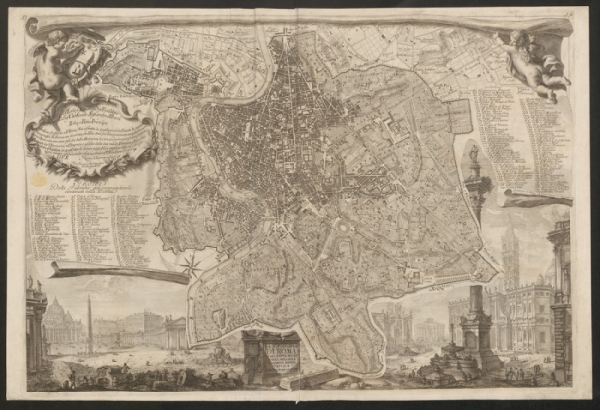 The incredible detail of Nolli’s Pianta grande ensured that it was still being used in some form for over 200 hundred years.[1] The story abroad, however, was another matter entirely: in terms of sales, it was a bit of a flop. Among the reasons for this disappointing turnover, at least in Britain, was the quick-witted John Rocque.[2] As was common in the eighteenth century, Nolli and his associate Girolamo Belloni attempted to raise funds for the project by seeking advance subscribers.[3] Nolli handled the domestic sales (i.e. the Papal States), while Belloni was responsible for international sales. To this end Belloni travelled across Europe from 1747 to 1756.

Before publication Belloni procured a meagre 59 subscribers abroad. Though we don’t know exactly how many of those came from London, the figure for Paris, by comparison, was 6. By the end of 1756 Belloni recorded that he had sold a grand total of 459 copies abroad. This was a rather disappointing return for a project so long and so dear in the making.

Despite this, the popularity of the map in London was high, relative to other European cities, perhaps reflecting Rome’s status in Britain as the Grand Tour capital. It might have sold even better still, were it not for John Rocque.

Among the first shipments sent out around May 1748 was a batch of 48 maps (or 56, according to a second note) en route to London that were lost in a shipwreck.

Belloni, it seems, did not react quickly enough to this setback, but Rocque did. For in 1750, after a fairly brisk turnaround, Rocque published his own map of Rome, a compilation of the Pianta grande and the Pianta piccola.[4] Even though Rocque did credit Nolli in his title, this was bare-faced plagiarism designed to capitalise on Belloni’s slowness in supplying the London map market.

Seeing an example of Nolli’s map in 1750, the artist Canaletto, in London at that time, remarked: “many gentlemen have already been provided with it by another hand”.[5] Though it is far from explicit, Canaletto was surely referring to Rocque, since he was the only mapmaker who had made a copy by this date.

Thus with a keen eye for an opportunity, John Rocque stole a march on his rivals: what was Nolli and Belloni’s loss was his gain. The eighteenth-century map market could be a ruthless place.

[1] In fact, it formed the base of plans of the city by the Italian government until the 1970s, see Ceen, Allan, ‘Nuova Pianta di Roma Data in Luce da Giambattista Nolli l’Anno MDCCXLVIII’, http://nolli.uoregon.edu/nuovaPianta.html.

[3] For more information about the subscription model, see Pedley, Mary Sponberg, The commerce of cartography: making and marketing maps in eighteenth-century France and England, (Chicago: University of Chicago Press, 2005), pp. 84-90.

[4] There is some uncertainty among map historians concerning how long it took to prepare copperplates for printing, with estimates ranging from a few days to many months. Contrast, for example, Pedley (2005), pp. 53-56, and Carhart, George, ‘How Long Did It Take to Engrave an Early Modern Map? A Consideration of Craft Practices’, in Imago Mundi, Vol. 56, No. 2 (2004), pp. 194-197.