The Virtual Mappa Project and DM: Online Editions of Medieval Maps and More

After a long journey and much hard work from a lot of very dedicated people, it is time to get excited about medieval maps again! The Virtual Mappa Project has been officially released as an open access publication, with an incredible collection of digitised medieval world maps from the British Library and beyond, all online, annotated and waiting to be explored.

Back in 2013 I was hard at work in the BL Maps department, tasked with marking up some marvellous medieval mappaemundi. At that time I documented my work and the project’s progress in a few blogs posts, including this overview available here. To recap, the British Library has lent its medieval manuscripts, imaging studios and hive-mind of expertise to the DM project, to help create a corpus of digital editions of medieval world maps in a visually navigable, text-searchable, translated format, that makes their intricacies much more accessible to modern minds. A full history of DM and everyone involved can be found here and it is fair to say there have been some technical hiccups along the way (hence the slight delay in publication), but we are now ready to unveil the finished product and I must admit I'm very excited. 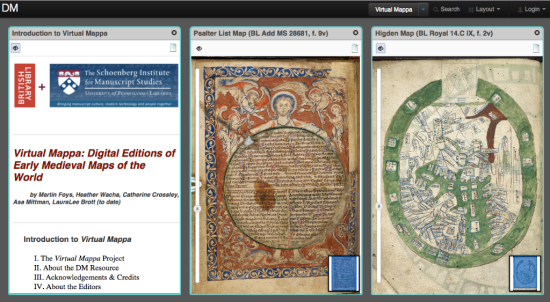 The selection of mappaemundi that we annotated come from the British Library's extensive collections and a handful of external sources, namely Hereford Cathedral, Corpus Christi College Cambridge, and St John's College Oxford. Six of the maps are from the BL itself, including the tiny Psalter Map and the List Map on its reverse page. Also included are the unique Royal Higden map (you can read much more about it here) and a smaller example of a Polychronicon map on its reverse. The starkly diagrammatic Peterborough Computus Map, labelled in both Greek and Latin, offers a different view of medieval cartographic culture and cosmology. And finally, one of the oldest manuscript maps in existence, the Anglo-Saxon World Map or Cotton Map, has been beautifully rendered and annotated; it is a key reason why this project came about in the first place. 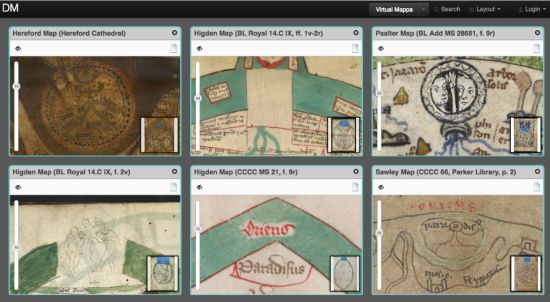 DM workspace showing different depictions of Paradise on six maps from the British Library and beyond.

Of the maps from outside the British Library, from Oxford we have the Thorney Computus Map, from Cambridge another 'Higden Map' in a very stylised format, plus the fascinating Sawley Map and an unfinished version of a computus map from Worcester. The manuscripts are available to view digitally at Parker Web 2.0, but if you want your Latin text transcribed and translated, I would take a look at our online editions instead! Last, but by no means least, we have the world's finest surviving example of an ornate medieval mappamundi, the Hereford Map. Measuring five feet high, this amazing map is on display at Hereford Cathedral, and I am overjoyed that it has been included in the Virtual Mappa Project, as it is mostly to blame for me getting involved in making digital versions of medieval mappaemundi!

So those are the maps, and they are ready to explore. Just open the webpage, (use Chrome or Firefox browser for best performance) click on Virtual Mappa Project from the dropdown menu at the top right and load the map(s) you are interested in. If you want to make the most of your experience, consult the digitalmappa.org help guide. The flexible layout means you can open one image at a time or have a few onscreen side-by-side for comparison, and you can use your mouse or trackpad to navigate the map image, as you would with any online map.  Annotations, whether text or image, will have a blue outline, and if you hover your cursor over this outline a pop-up box will appear with more information – e.g. a translation of the text, or a description of the image – which can be opened in a new window in the workspace. There are in-depth guides embedded in the resource, plus specific notes and further reading for each map, so all the information you might need is built in. 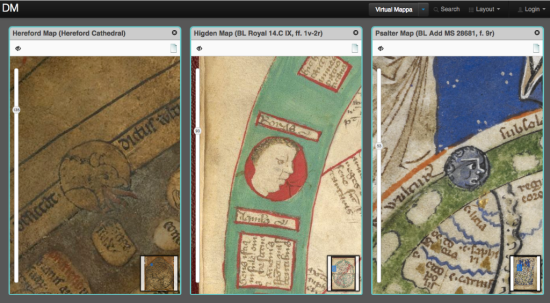 Virtual Mappa workspace with three depictions of wind roundels from the northern edges of maps.

If you are reading this blog then there is every chance that you will be interested in exploring some medieval maps yourself, so go ahead and take a look around! But who else could make use of this resource? It really is groundbreaking in presenting such visually complex medieval materials in such an accessible format. For this reason, we think it would make a great teaching tool, and I plan to integrate it into my own undergraduate teaching. For students who are new to studying medieval history, it gives a real sense of the richness of the artistic output of this era, highlighting key medieval cartographic principles like the all-encompassing Christian cosmology, and is maybe a bit more interesting to look at than texts in translation. It could be used by postgraduate students practising their palaeography skills, or anyone looking to incorporate more medieval visual materials into their work. The maps themselves contain so much interlinked information that their research applications for the era are almost endless. And if you are a scholar working on a particular medieval map, the project also invites you to become a Virtual Mappa editor and contributor – this is a collaborative, open access scholarly publication hosted by the Schoenberg Institute for Manuscript Studies, and every editor receives a byline and authorial credit for their published scholarly work. For more information see the "Becoming a Contributor" guide inside Virtual Mappa for more information. 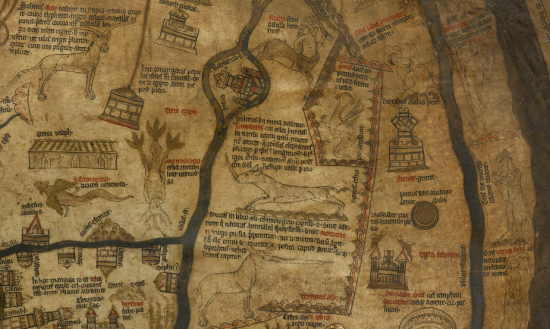 On a personal note, I'm particularly interested in the 'monstrous men' who inhabit the edges of these maps, and so I'll be incorporating this resource into my PhD research. The content is text-searchable, making it straightforward to check if a map is home to a particular creature, and I can easily gather high-resolution screenshots to use in my research. In general, Virtual Mappa should open up these maps to a much greater number of interested readers, thus stimulating contributions to our collective knowledge of these magnificent materials. Maybe you aren't a medievalist or a map specialist, but if you like Harry Potter or other books and films inspired by the magic of the Middle Ages you should seek out some of the fascinating mythical creatures found lurking in Virtual Mappa, especially on the Hereford Map, which also has its own stand alone version to explore... 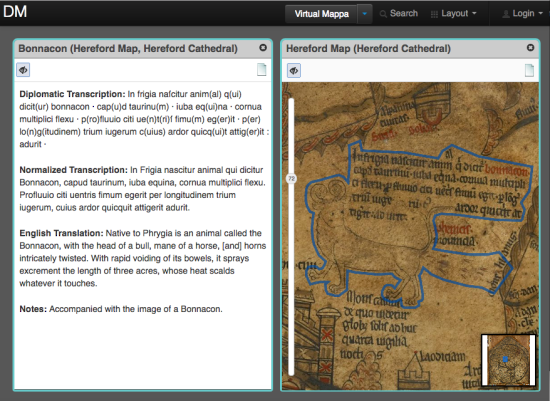 The Bonnacon, from the Hereford map - a very strange beast with an effective method of self-defence.

While you are checking out Virtual Mappa, there are two other projects at the Schoenberg Institute available to view, which showcase how DM software can be used for any type of digital object. They also make good use of another digitised BL manuscript, Cotton Vespasian D xv. We can see from the other projects – the Four Anglo-Carolingian Mini-Editions, and the Anglo-Latin and Old English Belltokens – how the DM  tools can be applied to other types of medieval manuscript materials, and maybe you can picture how the software could be used for sources that you work with. I have discussed the annotation tools before here, and it is now possible for users to set up their own DM servers and host their own projects. There is even a public sandbox available to try out ideas for projects, and the future DM2.0 release will make new project creations simpler and swifter. To find out more about the DM resource in general, just go to digitalmappa.org. 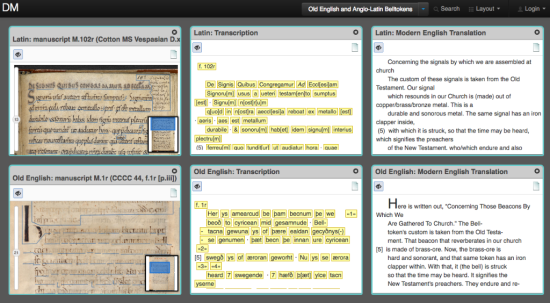 Myself and everyone in the British Library maps team are so happy that the Virtual Mappa Project is ready for you to explore. There is much more to come from DM in future, and I can't wait to see how other projects might use the tools that DM have developed. I'm looking forward to a whole new generation of medieval map experts emerging on the back of Virtual Mappa. Thanks to everyone involved in producing these fantastic resources, and I hope you enjoy exploring the medieval world through our online mappaemundi.