The telegraph is one of the greatest inventions of the 19th century. It revolutionised long distance communication and British journalist and author Tom Standage even nicknamed it the Victorian Internet. Most of the world’s population nowadays use the internet on a daily basis and we rely on it for communication, work, research, entertainment etc. Most of us probably don’t give a second thought to the mechanisms behind the availability of the internet and may not realise that modern communication systems are built on a concept introduced back in the 19th century! Yes, as surprising as it may sound, the vast majority of the global communications are conveyed by overland and underwater (submarine) cables, not the satellites as one may assume. 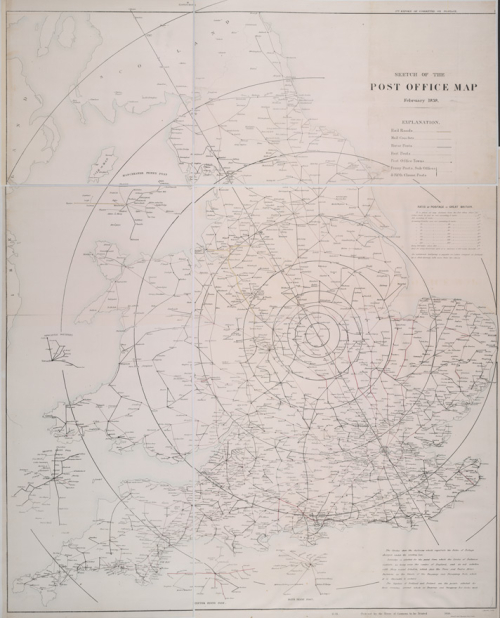 Map showing the Post Office network in England and Wales before telegraph communication existed - mail was distributed by rail, horse and on foot. The circles on the map indicate the distances which regulate the rates of postage (1838). Maps Crace Port. 19.48.

The submarine telegraph cables date back to the 1850s and although the technical aspects have changed the concept remains pretty much the same. The first telegraph communication sent across the Atlantic Ocean was established on 16th August 1858, when Queen Victoria sent the first official transatlantic telegram to the president of the United States James Buchanan, celebrating the successful completion of this great international undertaking. The successful enterprise cut down the communication time between North America and Europe from nearly two weeks to a mere few hours. Even though the first transatlantic line failed after just three weeks of use due to excessive voltage overload, it was quickly replaced by new cables linking the two continents.

This amazing innovation was widely celebrated, with publishers producing maps such as Bacon's chart of the Atlantic Telegraph which also provided details on the history of telegraphy with background to the origin and progress of the Atlantic telegraph project, as well as a description of the types of cable used. 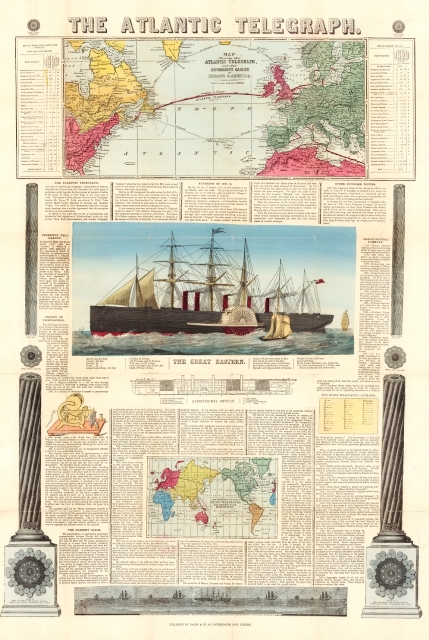 The British government quickly recognised the importance of long distance telegraphy, seen as the vital element for administering the British Empire. In 1862 the Indo-European Telegraph Department was established to overlook the construction of the line connecting Great Britain and its dependencies in India. This mammoth task of laying overland and submarine telegraph cables was given to the Eastern Telegraph Company (first established as the Submarine Telegraph Company in the 1850s). 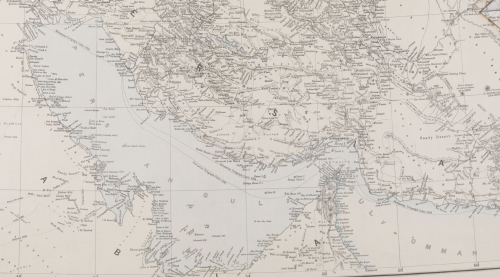 Detail from Map of parts of Arabia and Persia showing the submarine telegraph cable laid in 1864. IOR/X/10044/1.

Obviously such a huge project required enormous efforts, covering incredible distances and technical challenges whilst taking into account the changing terrain as well as a climate with extreme temperatures which proved to be a tricky task with cables prone to accidents and failures. The first telegraph line connecting Britain with India was opened in 1864. It ran overland through Europe, the Persian Gulf region via submarine cable and continued on to India and was later extended on to the Far East and Australia. 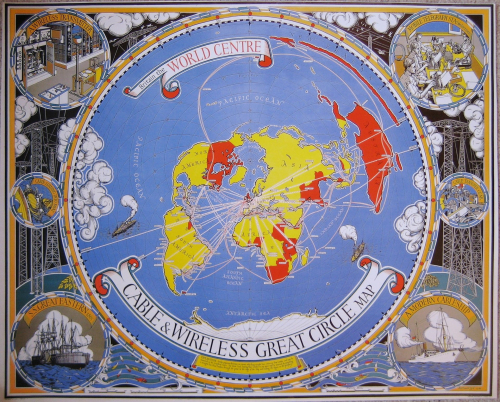 Full celebration of the age of communication can be seen in MacDonald Gill’s Cable & Wireless Great Circle Map produced in 1945 for Cable and Wireless Ltd. Gill’s world map shows the network of undersea and wireless cables connecting London with the British Empire territories and the rest of the world. The artist included details providing insights into the transformation of technology used in communication over the years. The vignettes surrounding the map include images of wireless transmitters, scenes depicting a busy telegraph station and cable being loaded into a boat, and the S.S. Great Eastern (a steamship designed by Isambard Kingdom Brunel, wh­­­­­­­­­­­­­­­­­­­­­­­­­­­­ich was used in the laying of the transatlantic telegraph cable in 1866) compared with modern cable transfer gear and a cableship used in the 20th century.

The transition from copper wire to fibre optic cable in the 1980s drastically increased the capacity of traffic which now allows us to browse the internet in a matter of seconds.

Posted by Magdalena Peszko at 12:59 PM