Hospitals under the microscope

The Collection of London Maps and Plans assembled by Frederick Crace is one of the Library’s treasures and offers an unparalleled overview of the history of London’s topography up to the mid-19th century. The collection contains a significant number of plans and drawings of public buildings including hospitals. With the coronavirus pandemic and the NHS facilities in the spotlight we decided to share with you a few examples from this amazing resource reflecting some healthcare changes in London.

In early modern England hospitals were very different to the institutions we know today. After the dissolution of the monasteries by King Henry VIII in 1540 the hospitals were no longer associated with (and therefore supported by) the church. While some ceased to exist others transformed into independent entities administered by the secular authorities. 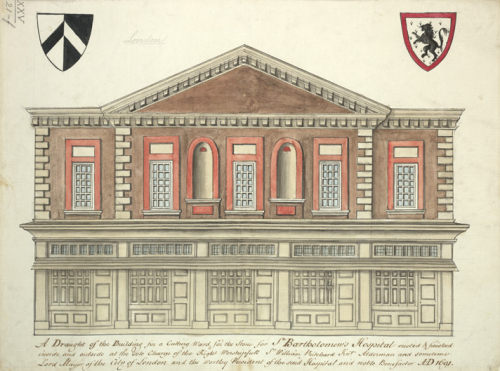 The facade of the Cutting Ward of St Bartholomew's Hospital. Maps K.Top.25.21.f

St Bartholomew's Hospital was established in 1123 and is the oldest hospital in Britain. It is located on the original site at Smithfield where it has continued to provide healthcare since its foundation. In 1547 Henry VIII granted it to the City of London and it became one of four royal hospitals along with Bethlem, Bridewell and St Thomas's. This grant endowed it with properties which helped provide an income. 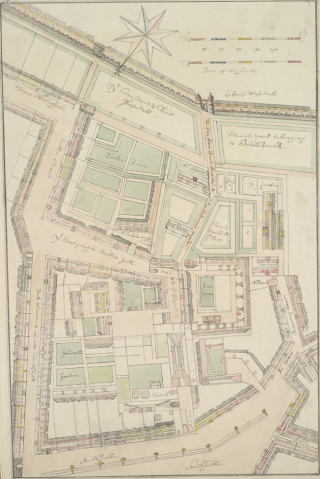 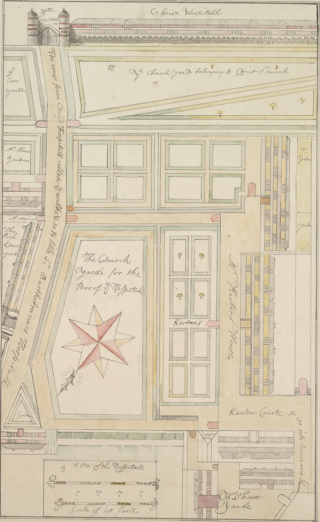 Unlike St Bartolomew’s, the Bethlem Royal Hospital (commonly known as Bedlam) one of the oldest mental health institutions in the world, changed its location a number of times. It was founded in 1247 to shelter and care for homeless people and over time changed to a mental institution. The original location was near Bishopsgate (on the Liverpool Street Station site). In 1676 the Bedlam hospital moved to a larger building at Moorfields designed by the City Surveyor Robert Hooke. Although the building with the impressive baroque façade was grand in appearance, it again proved to be inadequate for purpose and the City felt the site was more appropriate for a new (profitable) housing development. 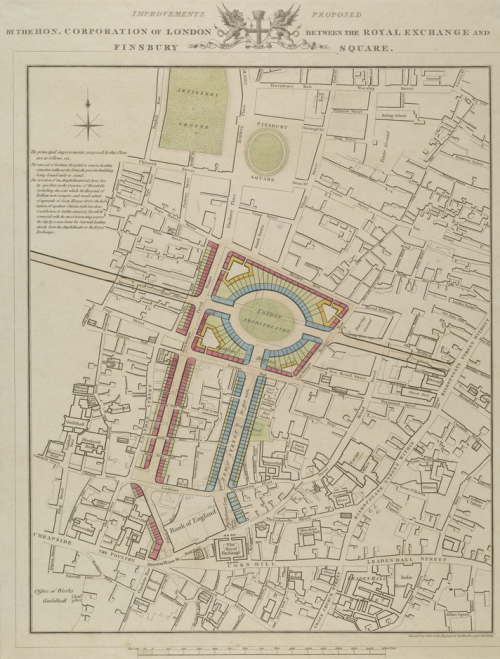 In 1815 the hospital moved to a new building designed by James Lewis located at St. George's Fields in Southwark (now home to the Imperial War Museum). In due course it was realised that the newly built premises were overcrowded and more space was urgently needed. In the 1830s new sections, constructed to a design by Sydney Smirke (the same architect who designed the famous British Museum’s Round Reading Room building in Bloomsbury) were added. 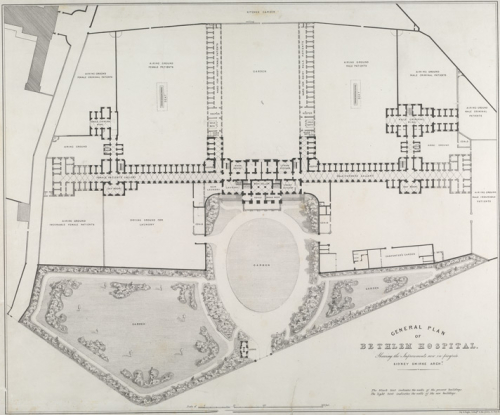 Those with keen eyes will spot a room labelled “beer cellar” and think of it as a surprising element in a psychiatric hospital but it seems the patients were put on a reduced diet poor in nutrition which they believed would help restore mental balance and interestingly this included beer. In order to improve patient conditions more space for indoor and outdoor activities were added. The new design included separate wards for “noisy patients” - a distinction not thought necessary at the previous location. Spacious gardens and airing grounds were also added, as well as rooms specifically designated for cold and warm baths as hydrography was practiced by Bedlam’s physicians for years and it was believed that the "cold bathing" method had particularly therapeutic effects.

By the mid-19th century the need for improved hospital facilities and specialised medical care were recognised and gradually introduced. 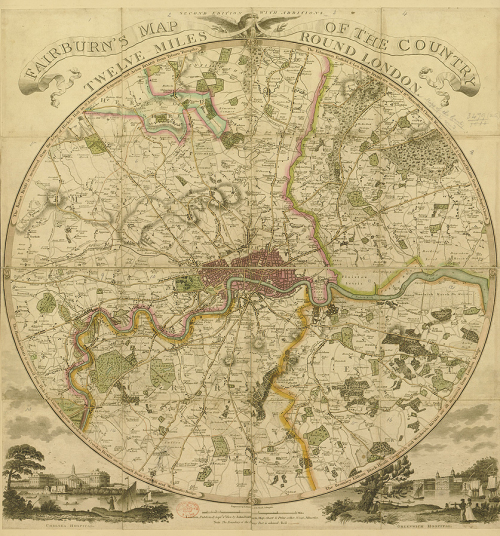 The Fairburn's Map of the Country twelve miles round London includes inset views of hospitals in Chelsea and Greenwich. The buildings are shown in peaceful surroundings away from hustle and bustle of the metropolis, emphasising the importance of greenery and fresh air, the perfect setting for a quick healthy recovery.

Posted by Magdalena Peszko at 1:42 PM