With spring in full bloom and Easter Bank Holiday approaching it can be tempting to go out for a stroll or even an Easter picnic. However, with the current pandemic you may consider the British Library Digital Collections instead which allow you to tour some of London’s parks without even leaving your home.

World famous London parks form a chain of greenery stretching across the centre of the capital. Hyde Park (with adjacent Kensington Gardens), Green Park, St James's Park and Regent's Park are all Royal Parks belonging the Crown. Historically the land had different functions ranging from hunting grounds, dairy farming and was even used as a duelling location. These parks played an important role in Londoners lives. 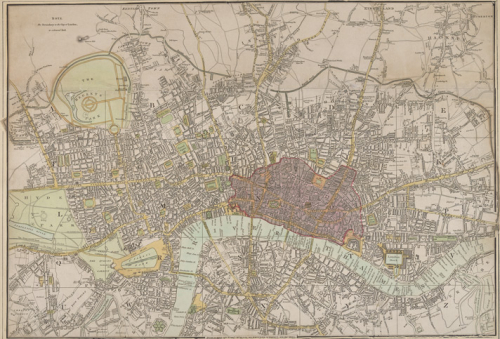 Hyde Park, one of the largest of green spaces in central London, was opened to the general public in 1637. It was redeveloped in the 18th century. On the request of Queen Caroline (the wife of King George II) Kensington Gardens were separated from Hyde Park and the Serpentine River was created. 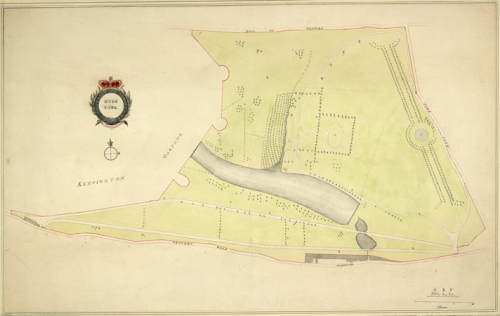 Many development ideas were put forward but most came to nothing. For example A plan of Hyde-Park with the City and Liberties of Westminster &c. published in 1766 in John Gwynn’s London and Westminster Improved, advocated a completely new street layout involving huge efforts and demolition of many buildings in the area. It also included two new Royal Palaces - one right in the middle of Hyde Park and another one at St James's Place. On the plan the Serpentine River is replaced by four symmetrical ponds surrounding the intended palace, and the canal in St James’s Park gives way to two smaller ponds. Upon closer scrutiny the original layout can be seen as faint lines. A plan of Hyde-Park with the City and Liberties of Westminster &c. shewing the several improvements propos'd. by John Gwynn (1766) Maps Crace Port. 17.15

The capital’s rapid expansion in the 19th century prompted calls for recreational public spaces so further urban planning activities took place. One of the significant additions to London’s landscape was Regents Park, previously known as Marylebone Park (originally created in the 16th century as a hunting and forestry ground).

The new Regents Park development project was backed by Prince Regent (who became George IV) and designed by John Nash, the city planner and architect. The proposal included a summer palace for the Prince (which was never built) set in parkland along with fifty elegant villas (of which only eight were constructed) as well as stylish terraces surrounding the park. The proposal also included a grand new Regent's Street connecting the new development with St James's Park and Carlton House, the Prince's residence. Plan of an estate belonging to the Crown called Marylebone Park Farm, upon a design for letting out on building leases by John Nash published in Some account of the proposed improvements of the Western part of London (1814). 10350.cc.4.

The park opened to the public in 1841. As well as a place for leisure it also played an important role in science. Since 1828 the northern portion of the park has been a home to the world's oldest scientific zoo (established by the Zoological Society of London) and just over a decade later, in 1840, the land within the Inner Circle was leased to the Royal Botanic Society who held on to the lease for nearly 100 years. 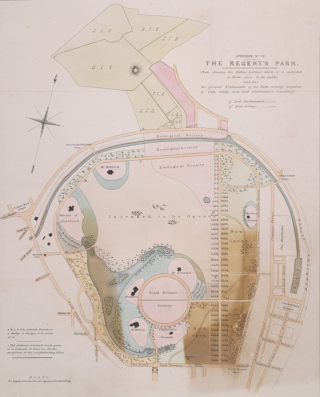 The Regent's Park. Plan showing the further portions which it is intended to throw open to the public… (1841). Maps Crace Port. 14.33.

The above maps have been georeferenced but there are still a few others that you can help us with! Not sure what Georeferencer is? Check out this blog by Gethin Rees.

Posted by Magdalena Peszko at 10:36 AM