A lesser-known trait of being a map curator is a tendency to notice maps on TV and in films. I’m not the only one. There are more maps on TV than you might think. For example, I guarantee you that every single classroom scene that has ever been filmed, from Tom Brown’s School Days to Hollyoaks, has a map somewhere in the background. I'm particularly interested in old maps - in contemporary settings, such as My Big Fat Greek Wedding II and I'm Alan Partridge (check out the scene with the mustard magnate), and historic settings, like Gladiator and Master and Commander (both starring map loving Russell Crowe).

When I spot them, it's my duty to check that they are historically accurate and appropriate for the setting they’re being used in. Because obviously people really care about this sort of thing: an inappropriately deployed map can stand out like... like a bottle of mineral water on a mantelpiece of an early 20th century stately home.

Actually, the only real downside to my obsession with maps in film is hundreds of terrible photographs of TV screens on my phone. I'm fascinated by how old maps continue to be relevant and live beyond their original purposes, and I'm almost always impressed by how often film researchers choose the right maps for the right settings.

Although the map I recently saw in a film didn’t quite get it right, it was even better for it. It was the 1970 historical drama  ‘Cromwell‘, directed by Ken Hughes, and with a show-stealing turn from Alec Guinness as Charles I.  About three quarters of the way through the film, when the Civil War had taken a decisive turn in favour of the Parliamentarians at Naseby (fought on 14 June 1645), attention switched to the King’s war room and a massive map of England and Wales laid out on a table with markers and flags laid over it.

Still from 'Cromwell' showing the enlarged facsimile map of England and Wales.

The map is a significantly enlarged copy of the England and Wales map included in Christopher Saxton’s set of English and Welsh county maps, published in atlas form in 1579. The original map measures around 50 x 40 cm, so although the era of the map was correct (it was still being printed in the 1640s) this vast copy was clearly not. The film should have used Saxton's wall map in 1583 which was certainly large enough, and was in use (through copies) during the Civil War.

But this doesn’t really matter, because the choice of map was a masterstroke. You see, I didn’t just recognise the map, I recognised the map. It's an enlarged facsimile copy of a map contained in an atlas held in the British Library at Maps C.3.bb.5. (formally Maps C.7.c.1.). 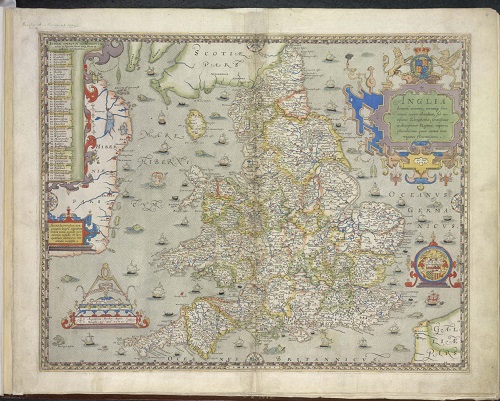 I know this map very well, I also know it through copies that were printed from the 1960s by the Maidenhead-based lithographic printer Taylowe Ltd. Taylowe had a contract with the British Museum (and from 1973 British Library) to publish same-sized facsimile poster copies of maps for sale in the Museum shop and elsewhere. You can see examples today on Ebay. I see my fair share of them too. A facsimile of the England and Wales map was first printed in 1966, with the blue of the sea rather turned up, as you can see below. 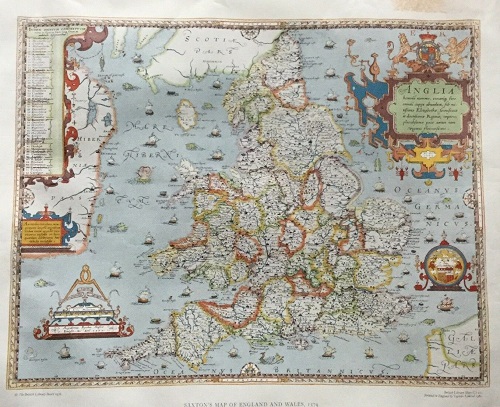 This is the image that Taylowe would have been asked to expand and print to monumental size for Alec Guinness to ponder pensively upon it in the film. (Tim Bryars has spotted the normal-sized facsimile in at least two Bond films, suggesting a rather stellar filmography for the map).

But the best thing about the map in 'Cromwell' is that the earliest known owner of the original map was James I of England (reigned 1603-1625) and it would have passed, as part of the Royal Library (now the Old Royal Library held by the British Library), to Charles I.

Yes, the map was owned by Charles himself. So although the map wouldn’t have been laid out on a table for the King to strategise over in his war room, we can imagine that at some point in his life he might have looked upon it, and maybe even pondered, ruminated or traced a royal finger over it.

And for this pedantic TV map spotter, that will do pretty nicely.