Part 1 of this map tour ended with a late nineteenth-century depiction of the Antarctic that, whilst recognisable to us in the present day, was still substantially blank.

The updated chart below was made twelve years later by the same cartographer, J.G. Bartholomew. The most significant additions include the label ‘Antarctica’ on the continent itself, and the depiction of ‘schemes for Antarctic exploration’ proposed by Sir John Murray. Murray was a pioneering oceanographer, who was strongly engaged in the promotion of a new age of exploration in the far south. The map assists his cause: the route of a proposed British expedition leads across the landmass from one side to the other, and a wide ring around the continent is labelled, ‘Area for Bathymetric Research, to be surveyed by ships during winter’.

The wide extent of ‘Observed pack ice’, which is coloured green, is not credible for that time, and the choice of shade lends a more benign aspect to those regions than they deserved. This is a persuasive map that exaggerates the extent of current knowledge, and downplays the difficulties involved in completing the picture. 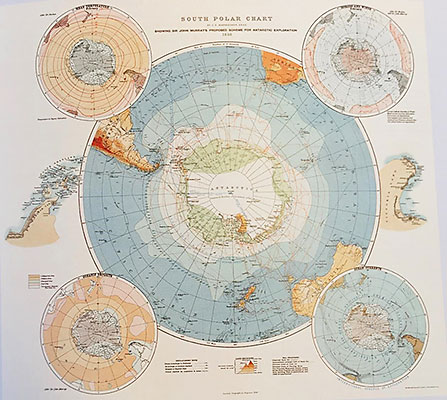 It worked! The ‘Heroic Era of Antarctic Exploration’, a twenty-year period of extensive activity and research on the continent, began in 1901 with the departure of the British National Antarctic (‘Discovery’) Expedition, led by Robert Falcon Scott. The map below documents the work of the expedition from 1902-04, and shows the extent of surveys carried out in the course of ‘Sledge Journeys’. The small-scale inset in the upper right corner shows the track of Scott’s first attempt towards the pole itself, and his furthest point south. 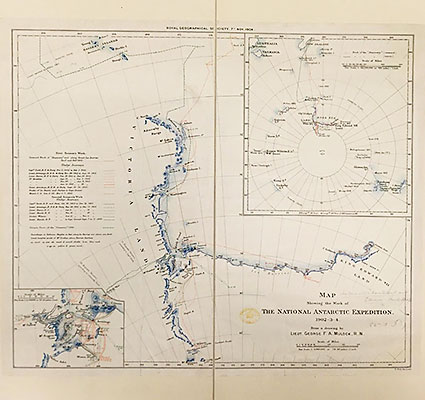 George Mulock, the expedition geologist, carried out a detailed survey of the area around the winter quarters in McMurdo Sound, shown here in large scale. In common with most Antarctic mapping of the period, this sheet was published as an accompaniment to the official expedition account. Locations of camps and a handful of sightlines, used in the construction of the map, are included; regions are coloured to show geology, and contour lines capture relief. Features named on the map for the first time include ‘Mount Discovery’ and the ‘Royal Society Range’, and a 'Camel’s Hump’ outcrop lies beside ‘Cathedral Rocks’. 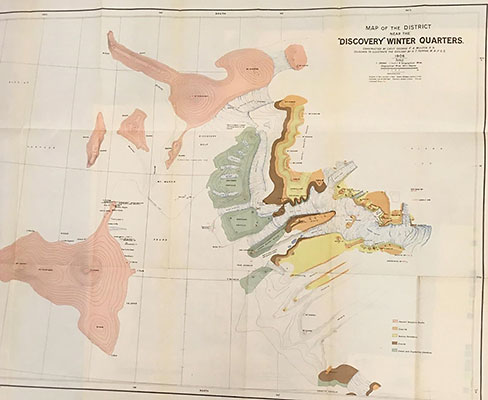 The British Antarctic (‘Nimrod’) Expedition 1907-09, led by Ernest Shackleton, claimed a new furthest south, and became the first to reach the magnetic south pole. The treks of both parties are documented on the sheets below, Shackleton’s extended journey trailing down towards the geographic pole on the left, while the route of the South Magnetic Polar Party appears on the right. The arbitrary location of the wandering magnetic pole is given an appropriate spot in the extreme top left corner of the sheet. 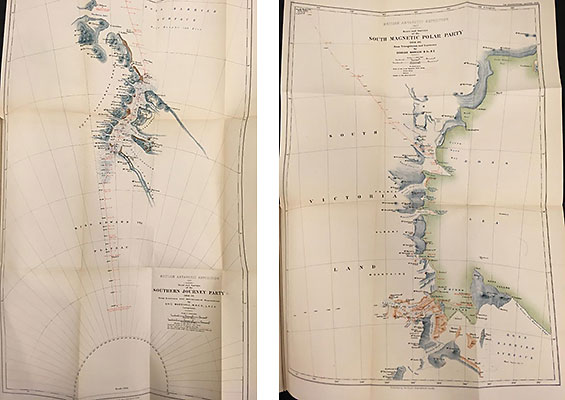 Norwegian explorer Roald Amundsen’s South Pole Expedition was the first to reach the geographic south pole, arriving on 14 December 1911. In events that are now well-known, Scott’s British Antarctic (‘Terra Nova’) Expedition arrived at the pole just five weeks later to find that they had been defeated. The entire polar party perished on their return and were not found for another eight months. In this short period Amundsen published an account of his own expedition, which featured this expressive sketch map depicting his route to the polar summit at the top of the page. With the fate of Scott’s party unknown, only the ‘Base of Scott’s Expedition’ is marked at the foot of the route previously followed by Shackleton. 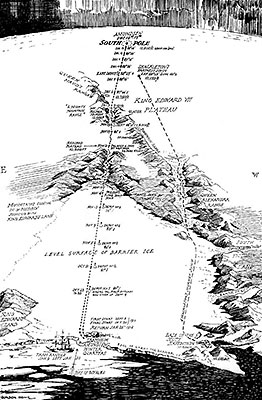 The routes of both explorers are honoured on a map published by Stanfords before 1921. The larger shaded region of the continent is unexplained, but would appear to indicate areas observed or surveyed. However, this would greatly exaggerate the area known at the time, and requires another explanation.

Shortly before this map was produced, Great Britain had asserted her claim over Antarctic territory lying in a sixty-degree arc between 20 and 80 degrees West (beneath South America), and by 1923 the Under-Secretary of State for the Colonies was stating his ambition that the whole of the continent should be incorporated into the British Empire. A look at some of the sub-regions incorporated in the shaded area – Victoria Land, King George V Land, King Edward VII Land – gives a clue that perhaps this sheet emphasises the ‘Britishness’ of these areas for an audience that was supportive of her territorial ambitions.

On 1 December 1959 the Antarctic Treaty was signed into effect by twelve nations, who set aside all territorial claims on the continent in pursuit of peaceful scientific collaboration. The map below, made two years previously for the Daily Telegraph newspaper, still shows the continent sliced into national sectors, and yellow shading indicates ‘Areas explored or seen by man’.

A thick red line passing across the continent through the pole indicates the planned route of the Commonwealth Trans-Antarctic Expedition, which, over the summer season of 1957-8 became the first expedition to cross the continent from one side to the other.

The map also shows a network of proposed scientific bases, to be established during the International Geophysical Year 1957-8, a major scientific project featuring collaboration between East and West during the Cold War. At the pole itself the names of Amundsen and Scott are joined by that of American naval officer Richard E Byrd, who flew an aeroplane over the pole for the first time in 1929, and was one of the first to bring aerial survey techniques to the mapping of Antarctica. 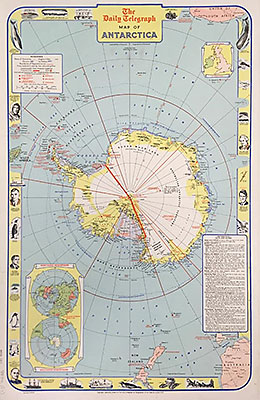 From the 1960s onwards, satellites were employed in mapping the vast areas of the continent still unknown, and in 1972 the Soviet Union incorporated Antarctica into a series map of the world for the first time. This map of the pole is sheet number 234 of the Karta Mira series. Shades of purple indicate fluctuations in the height of the polar plateau. 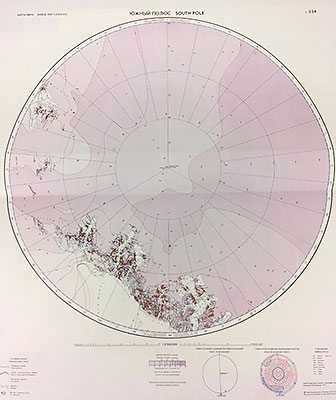 In the early 1990s the British Antarctic Survey was one of the founding partners involved in a collaboration between 11 nations to create a seamless digital map of the continent, by digitising existing maps and satellite images. The BAS sheet below takes its topographical detail from this Antarctic Digital Topographic Database, which is updated every six months. Since the 1960s, radio echo sounding techniques have been deployed to calculate the thickness of ice sheets, and the inset on the lower left shows the relief of the rock surface that lies beneath the ice. 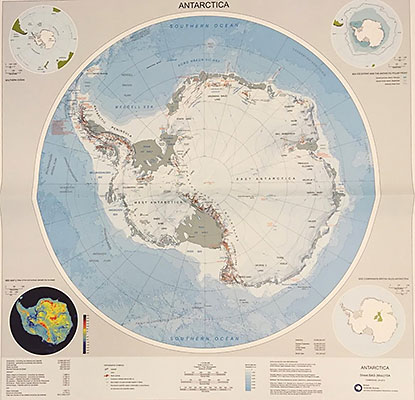 The United States produces another data model of the continent. This sheet is a print-out of a digital image made by the US National Geospatial Intelligence Agency and other partners, who employed a Blue Waters supercomputer to process data derived from high-resolution satellite imagery. The underlying dataset is described as ‘a high-resolution, time-stamped digital elevation model for the Antarctic ice sheet’. 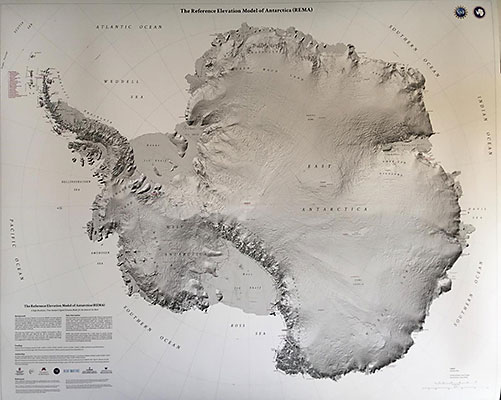 The Reference Elevation Model of Antarctica (cartographic), 2018. [Shelfmark yet to be allocated]

These last two maps reflect the switch made by cartography to digital data from the latter part of the twentieth century, and aptly conclude this brief history of the mapping of Antarctica.