The Eiffel Tower, Seattle’s Space Needle and the Atomium in Brussels – these instantly recognisable landmarks are must-see iconic attractions. Whilst original and daring in style, they also have something else in common - they are all architectural structures specifically designed for the Expo World Trade Fairs and maps relating to the first World’s Fair can be found within the British Library’s collections.

It all started nearly 170 years ago when The Great Exhibition of the Works of Industry of All Nations, was opened in London on 1 May 1851 by Queen Victoria. And what a spectacle it was! In the months following the grand opening ceremony over six million visitors marvelled over the spectacular show. The exhibition was housed in a gigantic glass and cast iron structure constructed to Sir Joseph Paxton’s design. The largest covered glass structure built at the time it was quickly dubbed the Crystal Palace and immediately became one of London’s major landmarks featuring in numerous maps and plans. 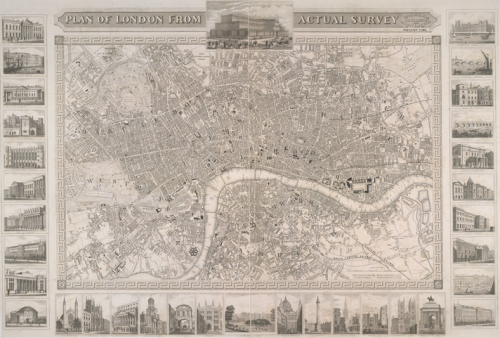 Map of London with view of the Crystal Palace in Hyde Park inserted within the title panel as a central feature. Maps Crace Port. 7.263

The idea of organising an international event to celebrate the achievements of modern industrial technology received wide support from prominent patrons including Prince Albert (Queen Victoria’s husband) who was appointed as President of the Royal Commission for the Exhibition of 1851 specifically formed to manage the preparations. The Commission chose Hyde Park in central London as a suitable site for the exhibition. 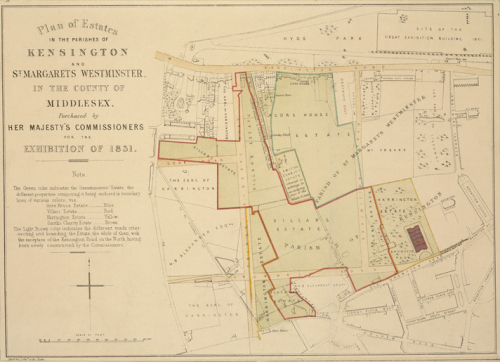 The event was recognised as an opportunity to showcase Britain’s industrialisation and modern technological advancements to an international audience. The exhibition’s building was actually one of the most spectacular exhibits. Paxton’s ingenious design used prefabricated components of glass and cast iron which were assembled on site. It not only met the criteria for a temporary, simple and inexpensive building but by taking advantage of natural light it also cut down the cost of maintenance. It offered incredible flexibility and even incorporated parkland features within. Rather than cutting them down Paxton enclosed all the full grown trees from the allotted land and made them the main feature of the central exhibition hall highlighting the enormous dimensions of the building. The hall also featured a stunning eight meter tall crystal fountain. Total floor space covered an area of nearly 13 football pitches (ca. 990,000 ft2 or 92,000 m2) with exhibition spaces on the ground floor and galleries providing over ten miles of display capacity. 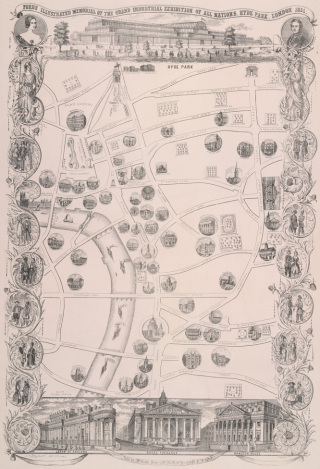 The exhibits included a wide variety of scientific and technological innovations as well as cultural objects. Over 100,000 items from every corner of the world were on display including Johnston’s Geological and Physical Globe, the first physical globe which won awards for the content and the stand (whose carved figures represented the four continents). Among the exhibits there were hydraulic presses, steam engines, microscopes, barometers, stuffed animals, French tapestries and furniture, even the priceless Koh-i-Noor diamond sent from India. The Great Exhibition was incredibly successful and made a profit way above expectations. This enabled the Commission to acquire land in South Kensington and aided the establishment of the world renowned London museums.

After the closing of the Exhibition in October 1851 the structure was dismantled and rebuilt in an enlarged form on a site in south London. The reconstruction was documented by a photographer Philip Henry Delamotte, his work provides a glimpse to what the Crystal Palace looked like. 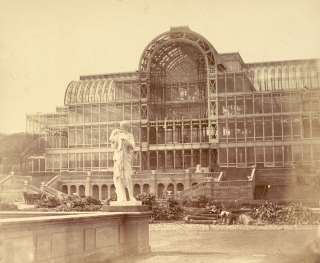 Photograph of the Crystal Palace by Philip Henry Delamotte. 1855. Tab.442.a.5

The Crystal Palace soon became a hub for cultural events, exhibitions and concerts. The venue was seen as a place of culture and learning, it contained series of themed courts on the history of fine art, and the surrounding grounds even featured life-sized sculptures of dinosaurs and extinct animals by Benjamin Waterhouse Hawkins. The residential area surrounding the new site was renamed Crystal Palace and two railway stations serving the site were opened. 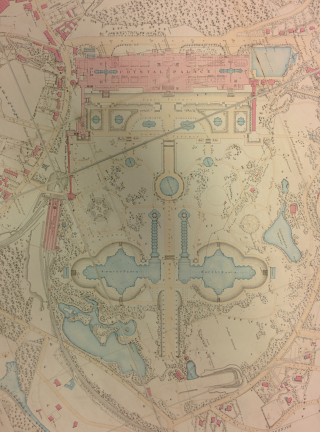 The Crystal Palace was destroyed by fire on 30 November 1936 and never rebuilt, nevertheless the Paxton’s design established an architectural style employed in later international fairs and exhibitions and started a long history of World Fairs.

Posted by Magdalena Peszko at 2:47 PM