Florence Nightingale the Angel of the Crimea

Today the world commemorates the bicentenary of Florence Nightingale’s birth. Renowned for her pioneering nursing work and the establishment of modern practices in this field, she understood the importance of well organised medical facilities and the need for trained nurses as crucial elements of efficient healthcare practice.

Nightingale is best known for her work during the Crimean War (1853–1856), the bloody conflict between Russia and the British, French, and Ottoman Turkish allied forces. The British Library has a multitude of maps which had been produced for the general public at the time to illustrate the conflict. These include battle plans, satirical maps and maps that show the seat of war within the wider region. The Crimean War was the first modern war extensively covered by media with first-hand dispatches sent by correspondents directly from the front lines. The conflict was well documented by written accounts and reports which were often illustrated by numerous maps informing the general public on the progress of the campaign. 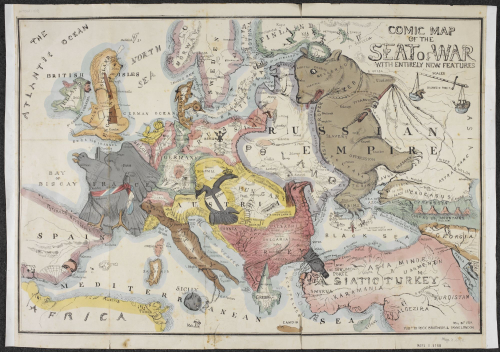 Comic map of the seat of war with entirely new features illustrating the political situation in Europe during the Crimean War. London, 1854. Maps X.6168

Although healthcare was already well established in England (see our previous blog), most of the British military field hospitals were in urgent need of modernisation. In the midst of the Crimean War the army staff struggled to provide adequate medical care prompting Sidney Herbert (the Secretary of State at War for the British Government) to approach Florence and request her help. She quickly assembled a group of 38 nurses to assist in the war effort. On arrival at the Barrack Hospital in Scutari (modern day Üsküdar, a suburb of Istambul in Turkey) in early November 1854 the nurses were shocked by the horrific condition of the medical facilities in which the patients were treated. 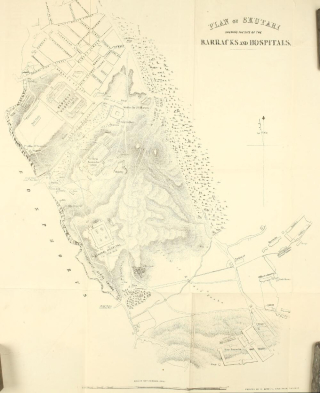 Plan of Skutari shewing the site of the Barracks and Hospitals published in Notes on matters affecting the health... by Florence Nightingale. London, 1858. BL Shelfmark C.194.b.297. Image courtesy Wellcome Library

They found an understaffed hospital with inadequate facilities, overcrowded wards, poor sanitation, and a constant shortage of medical supplies. It soon became clear to them that the majority of injured soldiers were dying from infectious diseases due to the unhygienic environment rather than their battle wounds.

The nurses were thrown in at deep end and didn’t have much time to adjust to these conditions as in less than a week after their arrival in Scutari the already overwhelmed hospital had received a contingent of soldiers wounded in the battles of Balaklava and Inkerman. The troops were deployed in the Crimean Peninsula, however, the main British military camp and hospitals were located across the Black Sea over three hundred miles away from the battlefields! 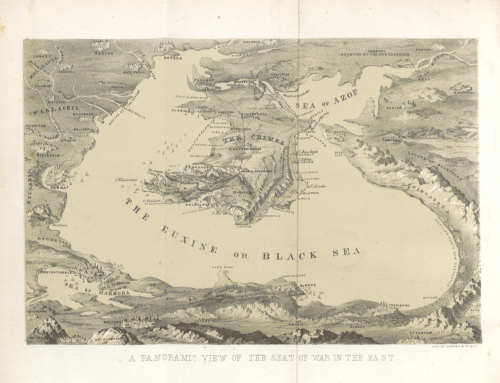 A panoramic view of the seat of war in the East published in A visit to the Camp before Sebastopol by Richard Cunningham Maccormick, New York, 1855. 9077.c.26. Sebastopol & its environs with the position of the besiegers & state of their works soon after the battles of Balaklava & Inkerman published in A Supplement to the Imperial Gazetteer... London, 1868. 10002.g.11.

Determined Florence established good practices and standards in medical care, ensured the correct hygiene procedure and obtained adequate supplies of medicine and nutritious food. She also made sure there was a regular laundry service providing clean clothing and dressings. Florence’s team efforts drastically reduced mortality rates among the soldiers. The nurses also ensured that special attention was paid to wellbeing and psychological needs of their patients and provided educational and recreational activities.

On her return to England Nightingale compiled and published Notes on matters affecting the health, efficiency, and hospital administration of the British Army – a report based on personal experience and observations which outlined negligence issues within the military heathcare practices and proposed a wide range of improvements and reforms. Map showing manoeuvres and various battles with location of field hospitals and medical facilities indicated, published in Letters from the Army in the Crimea… London, ca. 1857. 9077.cc.11.

Florence’s life ambition of setting up a training school for nurses was realised in 1860 when the Nightingale School and Home for Nurses opened at St. Thomas’ Hospital in London. Her legacy lives on and International Nurses Day is celebrated around the world on her birthday.

Posted by Magdalena Peszko at 12:03 PM