T.E. Lawrence’s maps of the Hejaz

In the vaults of the British Library, amongst sheets in the ‘War Office Archive’ once used to make and revise military maps, lie a handful of sketches and notes made by that iconic figure of the First World War, T.E. Lawrence. These documents provide an insight into exploration mapping of their time, and express some of the character of the man who made them.

Thomas Edward Lawrence, better known as Lawrence of Arabia, was renowned for his part in the Arab Revolt against the Ottoman Empire during the First World War. Perhaps less well known was his earlier role stationed in Cairo with the Arab Bureau, where he was responsible for maps supplied by the Survey of Egypt.

Towards the end of 1915, when a Turkish invasion of Egypt seemed likely, Lawrence was put in charge of gathering information concerning the Hejaz railway, a Turkish line built to connect Damascus in the north with Medina in the south.

A contemporary map shows existing pilgrimage routes from the coast to the southern end of the railway. 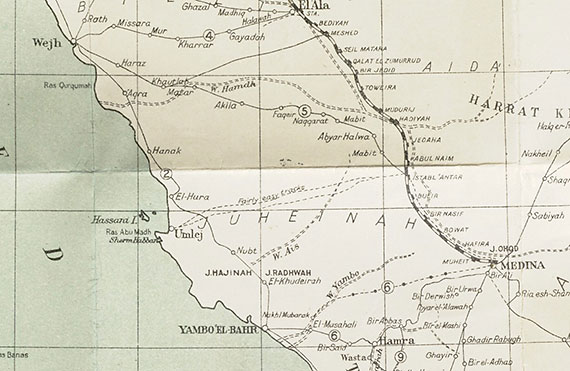 In December 1916 Lawrence drew the following sketch on headed notepaper bearing the name, ‘Arab Bureau, Savoy Hotel, Cairo’. The sheet depicts the region between Yenbo on the coast (‘Yambo El-Bahr’ on the sheet above) and the railway, and provides corrections for a sheet of the existing 1:500,000 scale map series (GSGS 4011). Lawrence appears to make the recording of place names a priority - he takes care to list each of the four springs at ‘Sueig’ and the five springs at ‘Sueiga’, while the pencilled detail of the topography is in places hard to make out. 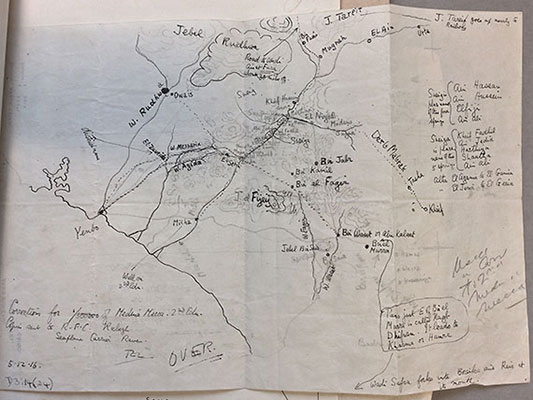 Lawrence was said to have an eccentric appearance, but an incisive mind – epithets which might also describe his mapmaking. By the high standards of military cartography, this and other sketches appear roughly drawn, or perhaps hastily made, and bear signs of Lawrence’s own quixotic and sometimes rebellious nature, as we shall see.

But they undoubtedly contributed to the correction of major inaccuracies on the maps available at that time. Lawrence would also have been aware that a skilled cartographer could make a fair copy from sketches such as this. The following sheet was traced from an original by Lawrence. 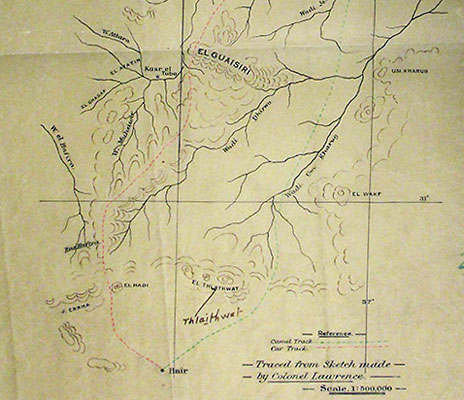 On the back of the Yenbo sheet, two small sketches provide corrections to a region lying closer to Medina, while a separate note describes a stretch of Wadi Ais in characteristically poetic terms - ‘For the first 20 or 30 miles its course is E. with a trifle of South in it’. 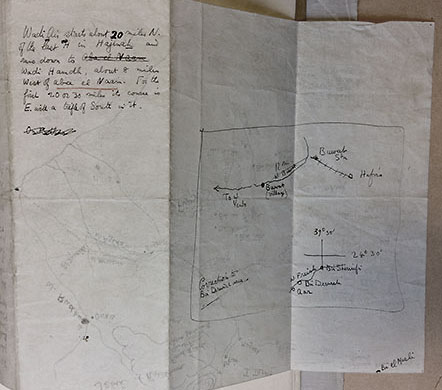 Another sheet bears a sketch of three villages at Um Lejj, situated on the coast between Yenbo and Wejh to the north. His short visit there, alighting briefly from HMS Suva in January 1917, is described in his personal account of the Arab Revolt, Seven Pillars of Wisdom. The sketch bears the same date as his visit, and appears on the back of naval signal notepaper. 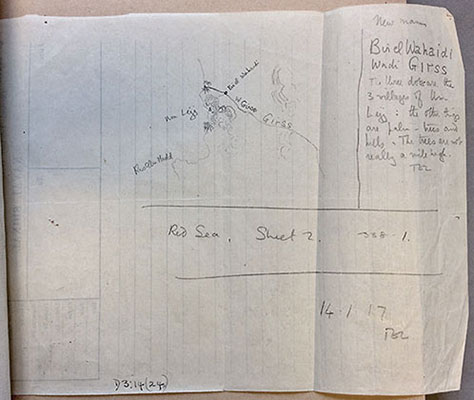 Lawrence takes the opportunity to note ‘New names’ for a revised map, and also provides, for the military cartographer who will receive it, an ironic description of the symbols he has drawn – ‘The three dots are the 3 villages of Um Lejj: the other things are palm-trees and hills. The trees are not really a mile high.’

By early 1917 Lawrence had left the Arab Bureau and was leading attacks himself on the Hejaz railway, in a British campaign to restrict Turkish forces stationed in Medina. The sheet below covers an area between the coastal settlement at Wejh and the railway - a mountainous region of desert that Lawrence crossed on camel-back before attacking the railway twice, first at Abu El Naam, and then at Madahrij. A powerful account of the expedition appears in Seven Pillars of Wisdom. 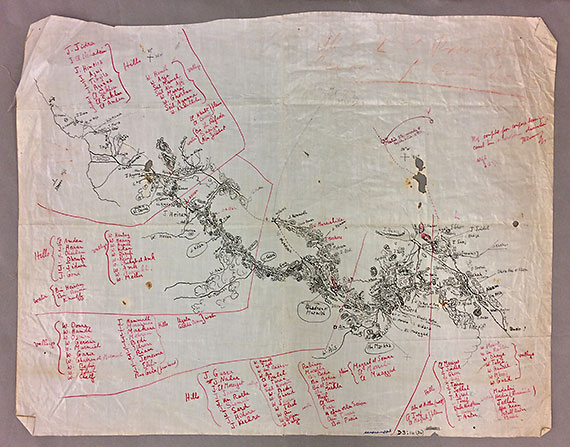 The sheet itself was made a month later, and bears the date 8.5.17 - the day before he set off on his epic and well-known march across the desert to make a surprise attack from inland on Turkish-held Aqaba.

The map is supplemented with information from reconnaissance work he had carried out in the days before with members of the Royal Flying Corps, and its purpose again is to provide corrections to an existing sheet of the GSGS 4011 series. However, the brief compilation note near the upper right corner reports the uneven quality of his mapping resources – ‘Map compiled from compass bearings, camel time, & aeroplane observations.’ 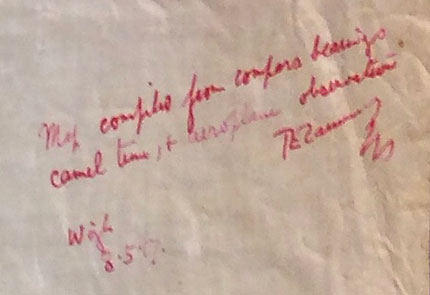 Despite the undoubted value provided by Lawrence’s corrections, the limitations of the map series as a whole were acknowledged. Foreign Maps, a US Army Technical Manual made after World War Two, comments, ‘The numerous warning notes appearing on the sheets regarding internal inconsistencies and the lack of adequate control emphasise the unreliability of the series.’

The longer-lasting value of the sheets lies in Lawrence’s documentation of place names as reported to him by local inhabitants. Lawrence has divided this last map with red ink into five regions, within which place names are listed by feature type – hills, valleys, plains, water and railway stations – providing a checklist for the subsequent mapmaker. 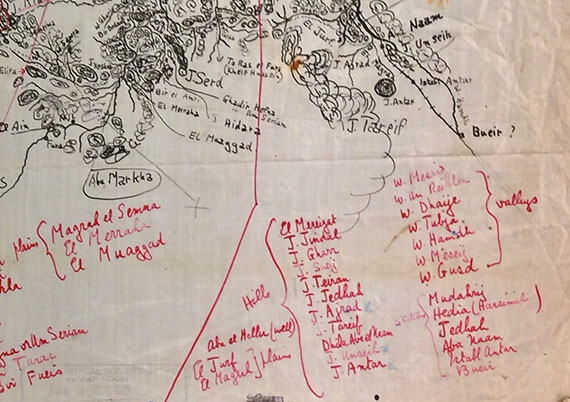 Later, his publisher queried the multiple spellings of place names found in the text of Revolt in the Desert, an abridged version of Seven Pillars of Wisdom - to which Lawrence replied, ‘I spell my names anyhow, to show what rot the [transliteration] systems are.’

Distaste for such systems aside, you can’t help but feel that his maps belie a linguist’s care for words, recorded faithfully, but variously as his informants pronounced them.

These sheets are in line to be catalogued and digitised by the Partnership between the British Library and the Qatar National Library, and will become available for your enjoyment from the Qatar Digital Library.