Thomas Tuttell: a most unfortunate mapmaker

You may have seen one of the British Library’s historic globes included in a ’curators on camera’ feature on social media recently.

It's the unique surviving example of a celestial globe published by Thomas Tuttell (1674-1702) in London  in 1700, one of a number of globes we've recently digitised and turned into interactive 3D models for the web. Thanks to the research of Ashley Baynton-Williams and Laurence Worms (whose indispensable reference work on British Map Engravers  was published in 2011) we have some compelling insights into the life and appearance of its creator.

Thomas Tuttell was a versatile craftsman, publisher, surveyor, mathematician and instrument maker, a polymath in today's eyes but something which then was pretty standard given that it all came together under the canopy of popular science. Tuttell, along with a number of other London practitioners, made a living thanks to a new enthusiasm for compasses, quadrants, measuring devices, maps, globes, calendars and mathematical guides. His terrific trade card, below, presents his wares, including what is very probably our celestial globe. 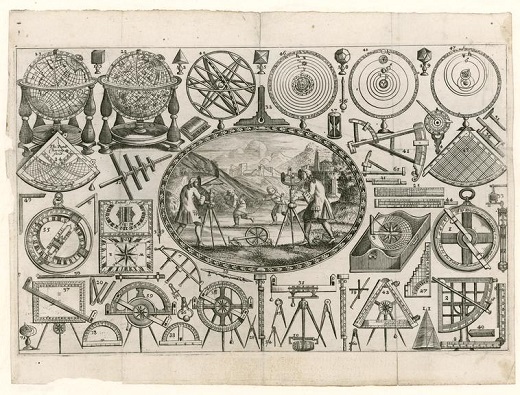 But was Tuttell any good? Not everyone thought so, particularly a rival mapmaker Robert Morden, who described him in 1702 as “a late upstart Hydrographer who never did, nor ever knew how to project or draw a map or sea-chart”. He would say that though, wouldn't he. London mapmakers loved insulting their rivals. We can balance Morden's opinion with the one of John Lenthall, who described the ‘Late ingenuious Mr Tuttell’ in his 1717 reissue of a set of mathematical cards first produced by - yes - Thomas Tuttell.

Whether Tuttell was a genius or an upstart, we do know that he was both very resourceful and unbelievably unlucky. 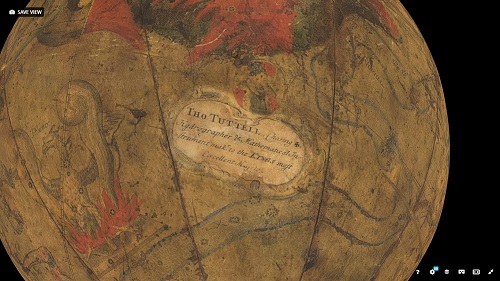 A detail of Maps G.53 showing the label of Thomas Tuttell

In the first instance, Tuttell didn't actually make the globe himself. A man called Joseph Moxon did, around 50 years earlier. What Tuttell did was cut out a lozenge-shaped piece of paper bearing his name and imprint and stick it over Moxon's name appearing on the globe he had acquired the rights to. The globe was and is an extremely proficient piece of British cartography and craftsmanship - indeed it was the first British-made celestial globe to have been produced in over half a century. Why try and improve an already excellent product? It made good business sense.

Secondly, Tuttell is undoubtedly one of the most unfortunate mapmakers we know of. For example, in June 1692 he advertised in The Post Boy for the return of his distance-measuring instrument called a waywiser (the wheeled object illustrated in the centre foreground of his trade card) that he’d lost or had purloined on the road between Barnet and St. Alban’s. Now, a waywiser isn’t an inconsiderable object in size and heaviness. Very unlucky indeed.

Tuttell also has the tragic accolade of being one of very few mapmakers to have died whilst actually in the process of making a map. He very unfortunately drowned in the River Thames around Dagenham at around 10am on 22 January 1702 whilst surveying on behalf of the Admiralty. He was only 28 years old.

We actually also have a description of poor Tuttell, from a note placed in The Post Boy by his widow Mary requesting the return of his body: ‘He was of a Middle Stature, fair light Hair but his Head newly shaved, his Coat a Grey Cloath napped, trimmed with black Buttons, his Waistcoat Gray, Breeches a light Colour; and his Linnen marked with a red T.’

A portrait of the young mapmaker, recently deceased.