The previous part of this article discussed the introduction of photography into maps and mapmaking over the first hundred years after its invention in the 1830s. Photography was initially used to complement information found on the map, by recording topographical views or objects of antiquity, and it was incorporated into the map production process from the 1850s. In this early period photographers also began to capture the work of survey teams in the field. Soldiers in the British Royal Engineers were specially trained in the use of cameras for this purpose. This group photo from circa 1860 was taken by one such soldier-photographer, and shows colleagues posing in a cutting cleared through the forest to enable survey work along the border between the United States and Canada. 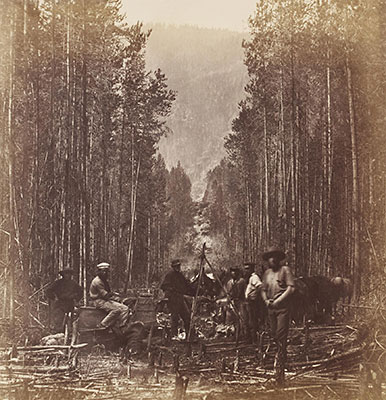 Cutting on the 49th Parallel, on the Right Bank of the Mooyie River Looking West, c.1860. Image courtesy Victoria & Albert Museum, Museum No. 40090.

Cameras were also employed to record advances in cartographic technology and instrumentation. The following scenes were set up to demonstrate use of the latest levelling instruments by staff at the Survey of India in 1909. Beyond this original purpose, the first image also illustrates the colonial hierarchy in the division of labour that was based on race. 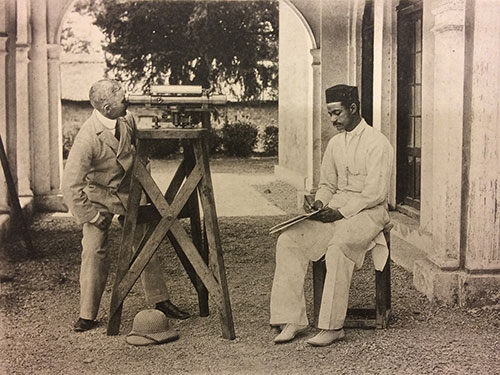 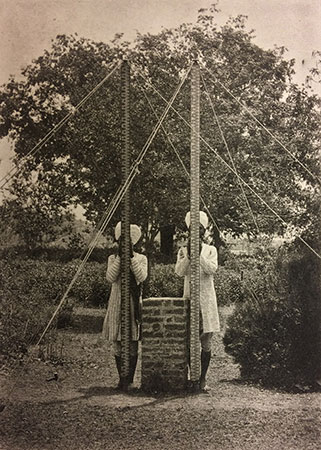 Observer with Cylindrical Level and Recorder (above) and General Walker’s Staves Erected upon Pegs (below), in Account of the Operations of the Great Trigonometrical Survey of India, Vol 19, Levelling of precision in India, 1910. BL IOR/V/19/20.

Another later image demonstrates the same division of labour in Africa amongst members of the Anglo-Belgian Congo-Zambesi Boundary Commission, as European surveyors take observations from a trig point around 1930. A contemporary account of the survey published in The Geographical Journal highlights the pressure the Commission was under from the two European administrations to agree and demarcate this African boundary quickly, so that valuable mining rights could be settled between them. 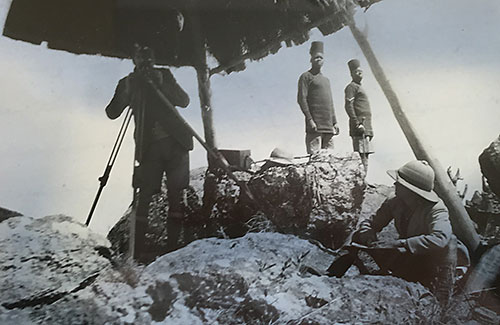 After the First World War there was a drive to realise the potential of aerial photography in new fields of geographical and archaeological analysis away from the battlefield. In 1919 G.A. Beazley published an article entitled Air Photography in Archaeology, in which he described wartime aerial survey work carried out around Samarra in modern-day Iraq. The survey had revealed the layout of an ancient city, details of which were transferred to the military map, below, though they were evident only from the air. 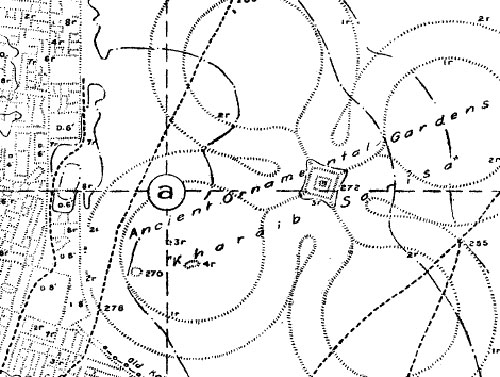 Another pioneer of aerial archaeology was O.G.S. Crawford, who was appointed the first archaeological officer at the Ordnance Survey in 1920. He used air photographs made by the RAF to measure the length of the Avenue at Stonehenge, and later joined with Alexander Keiller to make an aerial survey of archaeological sites in several British counties. Together they published Wessex from the Air in 1928. 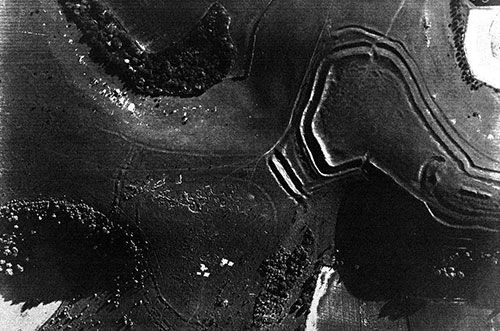 With the introduction of black and white infra-red photographic film in 1931, a new kind of geographical analysis became possible. Infra-red film responds to different wavelengths of light from the panchromatic type, and was useful in indicating high tide lines and different types of vegetation. The glass slide below shows an infra-red image from the 1930s, in which bare hills appear dark and sharply distinguished from the characteristically bright areas of cultivation at their feet. The water in the meandering river also shows up black. 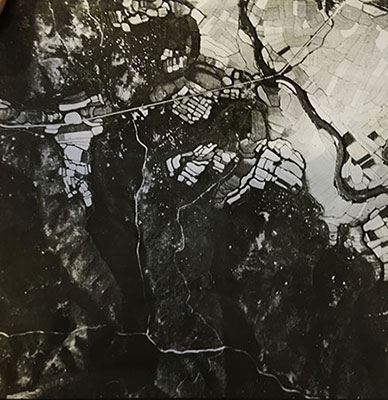 With the outbreak of the Second World War the use of infra-red film was amongst a number of techniques trialled with aerial photography to map the gradients of enemy-held beaches. In the end, the most successful method used air photographs taken with panchromatic film to determine the shape of the seabed by studying the shapes and velocities of wave patterns as they came to shore. 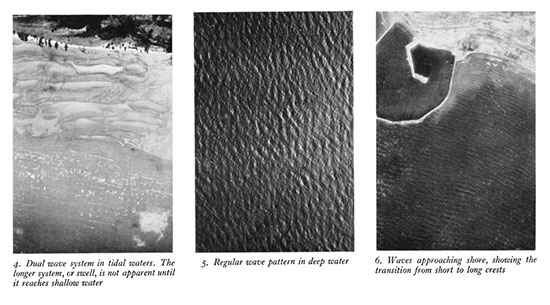 This crucial element of wartime invasion planning appears in the following beach map of an island off the coast of modern-day Myanmar. The diagrams in red, on the right, were derived from air photographs and show the beach gradients at different numbered points on the map. 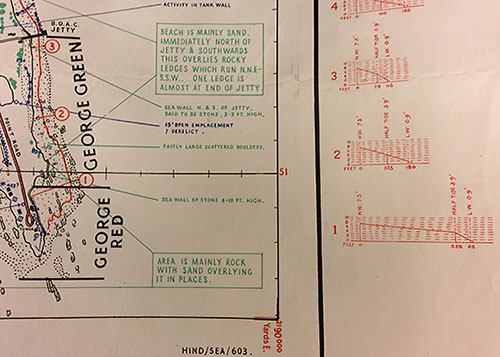 Photography fulfilled other roles in wartime invasion planning. During the Second World War German forces created volumes of geographical intelligence by country, in preparation for the invasion of foreign nations in Europe, North Africa and the Middle East. These volumes included photographs that complemented the information found on maps by giving a visual impression of the lie of the land, and by providing additional geographical intelligence. Pictures illustrating local geomorphology appear alongside images of industrial buildings, harbours and fortifications.

In the volume dedicated to the South Coast of England a number of what appear to be pre-war tourist postcards have been reproduced. The example below shows location 255 on the map of the Isle of White that follows. The accompanying text explains its inclusion - ‘Narrow sandy beach in front of the bank fortification, is exposed at low tide.’ 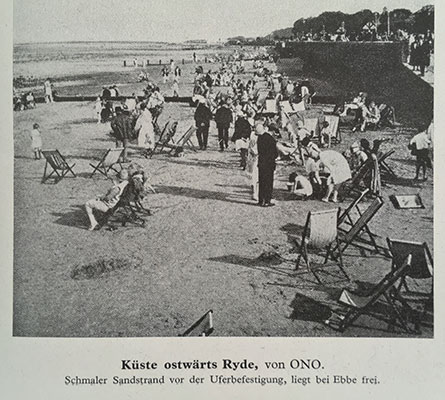 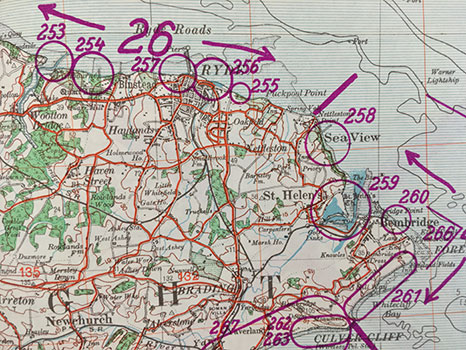 Advances in aerial photogrammetry had continued between the wars with the invention of multiplex instruments in Italy and Germany in 1930, which allowed a single operator to map large areas quickly from small scale air photographs. In the United States the technique was adopted by USGS, the national mapping agency, and was widely used to map agricultural areas under New Deal public works projects, so that by the start of the Second World War a large number of trained photogrammetrists was available for the American war effort.

Many of these photogrammetrists were put to work creating photomaps of islands in the South-East Asian Theatre, producing innovative sheets that consisted of a conventional line map on one side and a rectified photomap on the reverse. 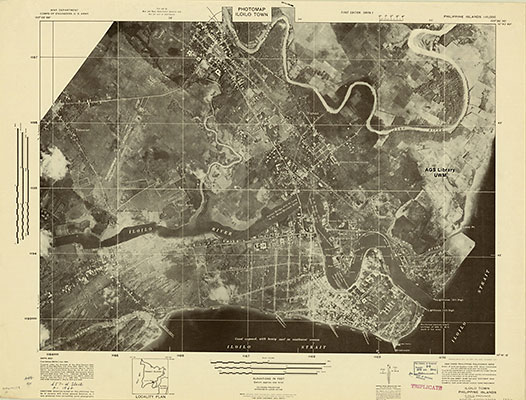 Similar advances had been made in large-scale aerial photogrammetry with the invention of the slotted template method in the United States in 1936. This was a development of radial line plotting techniques first promoted by the British Air Survey Committee in the 1920s, and provided a method of adjusting and correlating large numbers of overlapping air photographs.

One of the most intensive periods of large-scale aerial survey activity during the war came with the secret preparation of the so-called ‘Benson’ series of maps, named after the RAF station in Oxfordshire from which many of the survey and reconnaissance flights departed during 1942–43. The series was completed in advance of the D-Day landings in 1944, and features an overprint showing German defences along the Normandy coast of France. The British Library is currently conserving a representative set of materials used in the compilation of these secret maps, which will be made available at shelfmark BL Maps Y.4169. The material includes a US Army report that compares the accuracy of a sheet made by the multiplex method with one made by the slotted template technique. 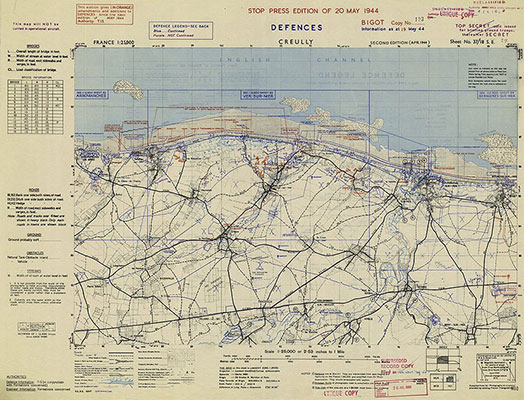 The final chapter will lead this brief survey up to the present day...