Have you ever heard of Potosí? Or perhaps wondered what is so special about this Bolivian city that it appeared on the early maps of South America alongside the views of well-known places like Havana, Rio de Janeiro and Mexico City? Most atlases produced from the mid-16th to 19th century included a map or an image with a description of this place, but why?

The reason that Potosí was put on the maps is rather extraordinary – in 1545 the Spanish conquistadors discovered the world’s richest silver deposits there. Within three decades a small mining settlement at the foot of the Andean Potosí Mountain in the Viceroyalty of Peru (present day Bolivia) was to become one of the world’s wealthiest cities with a population of over 160,000 surpassing that of Rome, Madrid or London at the time. 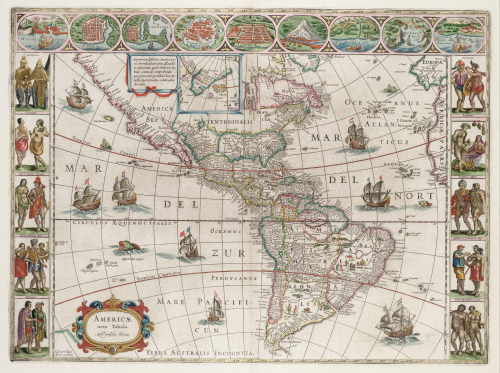 Potosí was the city with truly global impact. The vast deposits extracted from the Potosí Mountain also known as Cerro Rico (Rich Hill) provided over half of the world’s silver supply. Coins struck in the Potosí Royal Mint were in circulation worldwide reaching Asia and the Far East where they were readily accepted in exchange for oriental commodities such as silk, spices and porcelain. This sudden influx of silver revolutionized the world’s economy and many historians trace the beginning of the global economy back to Potosí’s silver boom. The city was so famous for its extraordinary wealth that its name became synonymous to richness and enormous value, so much so that even the expression valor de Potosí (meaning ‘worth of Potosí’) made its way into everyday language and is still used in modern Spanish.

As with most other influential wealthy cities it was portrayed on countless maps. Topographical views of Potosí provide a glimpse of the industrial infrastructure in the area with a network of hydraulic ore-grinding mills shown in the background. The views are often accompanied by a short description of the mines which marvel over the seemingly limitless silver deposits and astonishing quantities of produced ore. 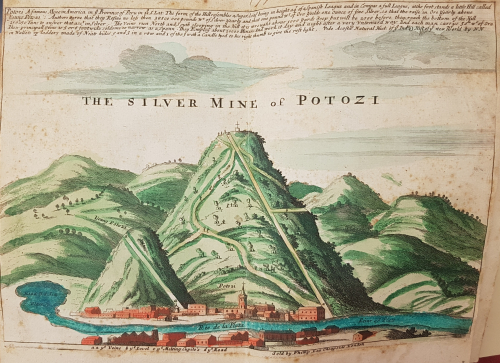 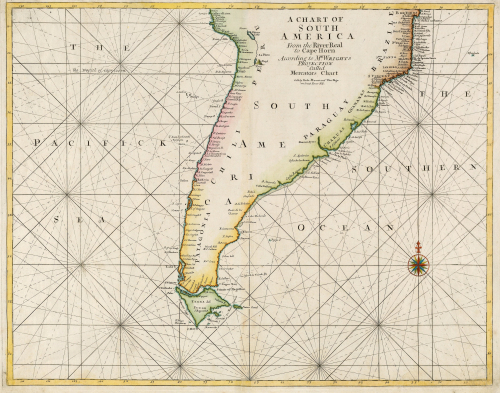 In order to extract and process the silver an enormous work force was required. The descriptive texts often quote that over 20,000 workers were ‘employed’ in the mines with no mention of the slavery, exploitation and the enormous human cost this lucrative enterprise involved. The contemporary authors of the time remain silent about the brutal conditions, the forced labour inflicted upon the indigenous population and the huge numbers of slaves brought from Africa and transported overland from Buenos Aires which was one of trading stations of the South Sea Company (a British enterprise trading slaves to the Spanish colonies in the Caribbean and South America). Hundreds of thousands of people perished in the Potosí mines during the colonial era due to exhaustion, accidents, gas and mercury poisoning. The celebrated mountain was dubbed the Mountain That Eats Men. 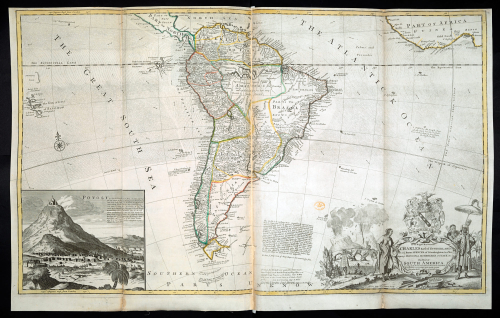 Map of South America by Herman Moll with an inset view of Potosi,. The map also indicates location of ‘The Great Mines of Potosi’. London, after 1714. Maps C.46.f.12.

By the end of the 18th century the quantity of silver extracted from the mines of Potosí had diminished with most of the good ore exhausted. According to A Gazetteer of the World by the 1850s the city was a shadow of its former self with the population reduced to 14,000. The Potosí Mountain didn’t even make it to the List of the Principal Mountains on the Augustus Petermann's Peru-Bolivian Tablelands map issued with the Gazetteer. Potosí, once an influential city and the backbone of the Spanish Empire’s economy fell into decay and lost its prominent place on maps almost as quickly as it appeared in the 16th century. 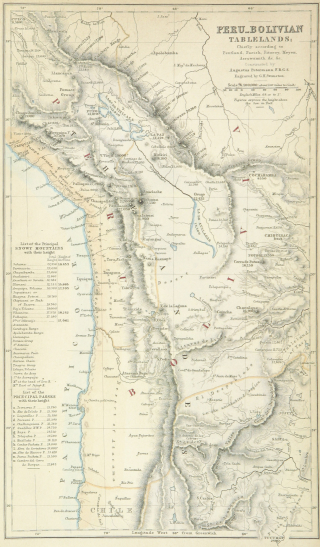 Peru-Bolivian Tablelands map … by Augustus Petermann published in A Gazetteer of the World, or, Dictionary of geographical knowledge ... Edited by a member of the Royal Geographical Society. Edinburgh & London, A. Fullarton, 1850-57. 10003.w.6.

Posted by Magdalena Peszko at 9:55 AM