An Atlas of the Himalayas by a 19th Century Tibetan Lama: A Journey of Discovery

A guest post by Dr Diana Lange of the Institute for Asian- and African Studies, Humboldt-Universität zu Berlin

In the late 1960s the former British Indian diplomat and Tibetologist Hugh Richardson noticed a collection of maps and drawings in the India Office Library. These were catalogued as the ‘Wise Albums’(Add. Or. 3013–43), but the circumstances of the origin of this collection were unrecorded. A typewritten note stated that the drawings appeared to be by a Tibetan artist, probably a lama, who had contact with Europeans, and that they appeared to have been commissioned by the writer of the accompanying explanatory texts. The maps and drawings were dated between 1844 and 1862, while the bindings were dated late 19th century and inscribed with the name ‘Wise’. This was the start of the long search for “Wise,” who was finally identified in the late 1990s as Thomas Alexander Wise (1802–1889), a Scottish polymath and collector who served in the Indian Medical Service in Bengal in the first half of the nineteenth century. It can be said with confidence that while the collection was named after Wise, he was not the one who commissioned the maps and drawings.

This map shows the town of Shigatse in Central Tibet with Tashilhunpo Monastery in the centre. Numerous other monasteries are depicted, as well as settlements and rivers. Travel routes are indicated in grey colour. (BL Add. Or. 3016, f.2)

Several scholars who undertook research on the Wise Collection in the past all attempted, without success, to trace the origin of the collection. Most recently, the historian and Tibetologist Michael Aris dealt with the Wise Collection before his death in 1999, again without being able to trace its origins.

Michael Aris noted that the Wise Collection “may represent the most ambitious pictorial survey of Tibetan topography and culture ever attempted by a local artist.” This ambition is reflected in six large picture maps. Placed side by side, five of these picture maps add up to a 15-metre-long panorama showing the west-east route between Leh in Ladakh and Lhasa, and the north-south route leading from Lhasa southwards to Bhutan and today’s Arunachal Pradesh in northeast India. The maps are accompanied by 28 related drawings showing detailed illustrations of selected monasteries, monastic rituals, wedding ceremonies, ethnic groups and other topics. Altogether there are more than 900 numbered annotations on the drawings. Explanatory notes referring to these numbers were written in English on 24 separate sheets of paper, with a total of around 7,500 words.

I first encountered the original maps and drawings in the summer of 2009 during a visit to the British Library. I remember that I was so overwhelmed by the quality and quantity of the material, by the beauty and vivid colour of the illustrations and by the map maker’s attention to details – that I decided, still in the Prints and Drawings Room – to work on the collection and to follow Michael Aris’ giant footsteps. This map with Tibetan captions shows the northern part of the Zangskar Valley in today’s India in the Western Himalayas. The town of Padum with the old castle is shown on the left, the famous Sani Monastery is depicted on the map’s right side, surrounded by a wall. Different bridges are shown as well as small settlements. (BL Add. Or. 3018, f.4)

Being trained in Tibetology I focused in the beginning on the stories in the maps and drawings – hundreds of little details – and on a new research field: history of cartography. Toby Lester, in presenting his research on the ‘Waldseemüller map’ – the map that gave America its name – stated: “The map draws you in, reveals itself in stages, and doesn’t let go.” (Lester 2009: xxi).This certainly proved true for me and the maps of the Wise Collection. Some of them reveal themselves more easily than others. In drawing the maps, the lama produced a visual account of his travel route, which was more than 1,800km in length. Furthermore, he addressed a range of topics in the accompanying drawings that represent an overwhelming wealth of information on Tibet and the Western Himalayas.

In studying the material, I developed both a feeling for the lama’s drawing style and an understanding of his way of thinking. The so-called ‘scale’ used in the maps is not uniform, nor is their orientation. As a result, many people who look at the maps comment that they are ‘wrong’. While the maps might not always seem ‘accurate’ from a Western scientific point of view, they can give much information about their maker. Shrunk to the dimension of the maps and ignoring scale and cardinal orientation, one could virtually walk through the landscape along the travel route shown on the maps. The mapmaker travelled along this route, familiarizing himself with topographical and infrastructural characteristics, which in turn he depicted on the maps. From our present point of view – being able to benefit from geographical knowledge in the age of Google Earth – it is easy to recognize that specific waterways or mountain ranges run parallel to each other. The lama who made the maps in the Wise Collection did not have access to this information. But that does not mean that his representation of Tibet and the Himalayas is less ‘accurate’. He produced the largest panoramic map of Tibet of its time, based on the knowledge available at that time and based on his personal life experience.

The longer I studied the material and the deeper I understood the collection as a whole, the more new questions emerged. I grew increasingly interested in the story of the collection, and I wanted to understand more than just the maps. I sought to find out about the milieu in which they were drawn, and how and why they came into being. In March 2016, after years of research, I finally found the name of the man who commissioned them. It was William Edmund Hay (1805-1879), former Assistant Commissioner of Kullu in the Western Himalayas. Around 150 years after the maps were commissioned by Hay and created by the Tibetan lama, I was able to add this fundamental piece of information to what was known about the Wise Collection. 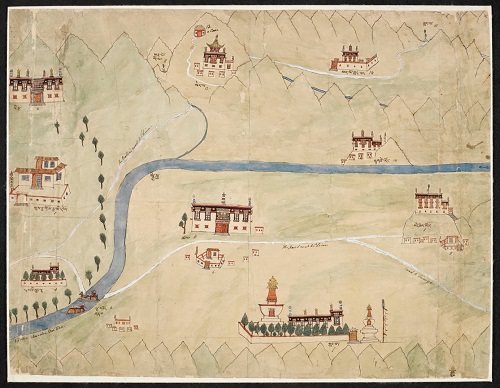 This map with Tibetan and English captions shows the Kyichu Valley east of Lhasa in Central Tibet. Several monasteries are shown in great detail. Travel routes are indicated in white colour, the little boats in the lower left corner represent a ferry station. (BL Add. Or. 3017, f.1)

Like many other mapmakers and painters, the man who made the maps in the Wise Collection has remained anonymous. He was a Tibetan lama from Central Tibet and he had in-depth local knowledge about many of the places he depicted. He was clearly experienced in drawing and he was familiar with Tibetan cartography and visual representation of different elements of Tibetan environment and society. As an educated lama, he was trained to memorize texts and, as testified by the Wise Collection, he was gifted with an uncommon visual memory. We do not know with certainty why the lama shared his knowledge of Tibet and his travel routes with Hay, especially at a time when the door to Tibet was closed to foreigners. With his maps and drawings, the lama opened this door, first for Hay and later for many other people. He opened a door into a time long gone, and this has given us the chance to experience what Michal Aris called a “unique view from within” (Aris, 1992: 126).

Very often, books represent just the results of research gathered over the years. However, with my publication An Atlas of the Himalayas by a 19th Century Tibetan Lama: A Journey of Discovery I aim for several goals. As the result of a collaborative project between two people from different cultural backgrounds, the Wise Collection represents a “visible history” of the exploration of Tibet. My intention is thus not only to introduce the collection and the stories in the maps and drawings, but also the story of the collection: the people involved in the creation process, the collection’s journey from India to – and then within – Great Britain, and also the tracing of the collection’s origin. My research on the Wise Collection was comparable to a detective story, and I also want to share this tale with the reader. I very much hope that the book will present my work in a meaningful way to an audience beyond Tibetologists. The book’s subtitle – Journey of Discovery – refers to different journeys that intersect as if it was all one big journey over two centuries, including the lama’s journey, Hay’s journey, the collection’s journey to Great Britain and my own journey of research. 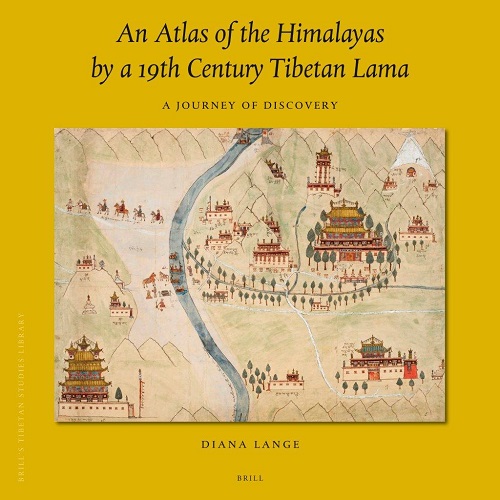 Lange, Diana. 2020. An Atlas of the Himalayas by a 19th Century Tibetan Lama: A Journey of Discovery. Leiden: Brill.

Aris, Michael. 1992. “The Buddhist Monasteries and Rituals of Tibet: A Unique View from Within.” Himalaya, the Journal of the Association for Nepal and Himalayan Studies 12, no. 1: 126.

Lester, Toby. 2009. The Fourth Part of the World: An Astonishing Epic of Global Discovery, Imperial Ambition, and the Birth of America. New York: Free Press.