This final chapter discusses a number of cartographic innovations from the middle of the twentieth century onwards that exploited the ability of photographs to capture data - from developments in aerial photogrammetry, through multispectral satellite mapping and surveillance imagery, to the digital map platforms of today.

Technical innovations that had begun during the Second World War soon extended into the civilian sphere with the widespread adoption of aerial photogrammetry by national mapping agencies worldwide – a development that arguably had a greater impact than any other on mapping practices of the twentieth century. New radar surveying techniques allowed air photographs to be pinpointed on the ground more accurately, more economically and over far greater areas than before, bringing vast regions of inaccessible terrain within the mapmaker’s scope for the first time.

Between the 1950s and the 1980s, the whole of the Soviet Union was mapped in this way, resulting in over 300,000 sheets at a scale of 1:25,000. During the same period, the British Directorate of Overseas Surveys also covered over 2.5 million square miles of land, mostly over former British colonies and administrations that had no mapping capability of their own. The image below shows an isolated settlement and nearby areas of subsistence agriculture in eastern Nigeria. Maps made from such images contributed to state economic and social planning initiatives. 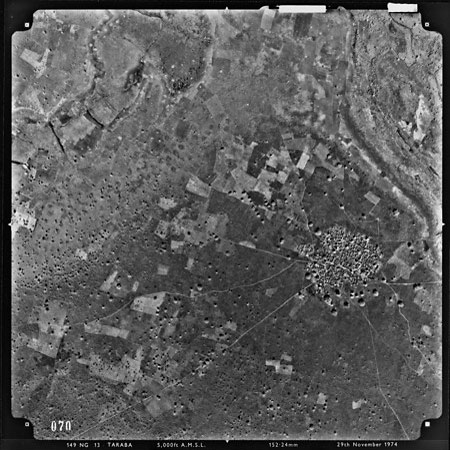 Mapping vast, sometimes featureless, inland regions led to some eccentric examples of cartography. The following detail is taken from one Australian map sheet that covers more than 2,750 square kilometers of the Great Sandy Desert. Each square is one kilometre on the side. Of the total 3,062 sheets in the series covering the whole country, only half were printed – this sheet was selected for print on account of a single track that meanders briefly along the bottom edge, before diverting back to the adjacent sheet beneath. 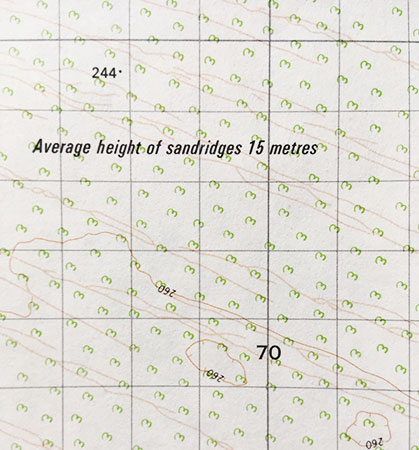 Widespread use of air photographs also led to security concerns. As part of the British reconstruction effort after the war, the RAF covered the whole of Great Britain with aerial photography in order to assess bomb damage. Between 1945 and 1951 the Ordnance Survey published the photography as OS Mosaics, large-scale rectified photomaps of towns, cities and some rural areas.

After many images had already been published, it was feared that foreign states might benefit from the level of detail of sensitive sites that was revealed. Further editions of the same sites were therefore over-painted before publication in order to remove or disguise these features. The military airfield shown in the image below has been replaced by a fictitious pattern of fields and country lanes in the later version beneath. In 1954 OS Mosaics were removed from sale entirely. 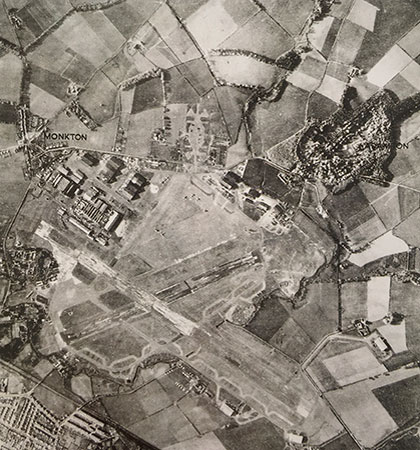 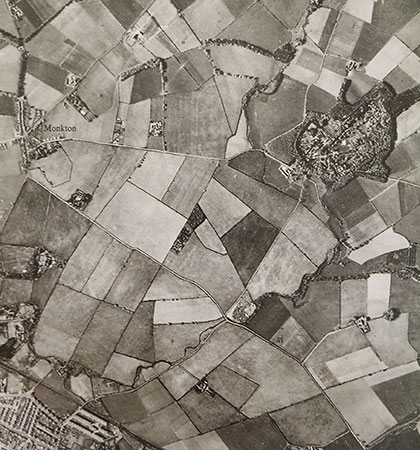 An alternative and innovative approach to photomapping was taken in Sweden. From as early as 1935, aerial photography was incorporated into the Ekonomisk Karta land use series. The large-scale photographs provided a base layer onto which topographic, cadastral and land use symbols and colours were added. 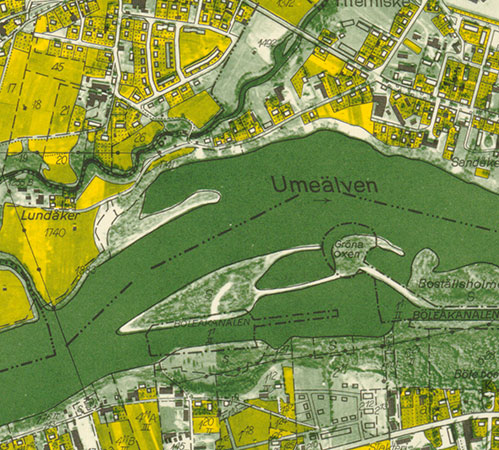 Stereo pairs of air photographs could be made into three-dimensional ‘anaglyph’ images, which were viewed through coloured glasses. Examples of these were created for military planning purposes during the Second World War, such as a German series from 1944 showing the Istrian coastline (held at BL Maps Y.3842.). After the war, the French national mapping agency published a number of anaglyphs in a Relief Form Atlas of 1956. The purpose of the atlas was to teach readers to understand the mapping of a wide variety of landscapes by showing three-dimensional views alongside maps of the same location. The following image of the volcanic cone atop Mount Karthala in the Comoros is striking when viewed through a pair of red and blue 3D glasses. 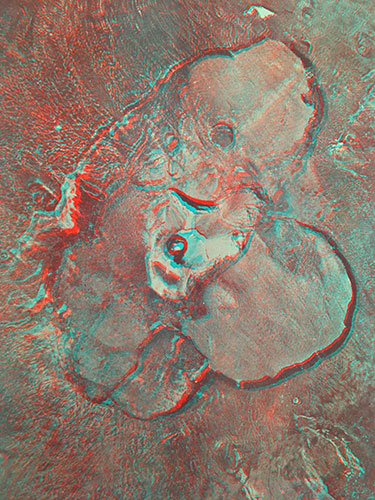 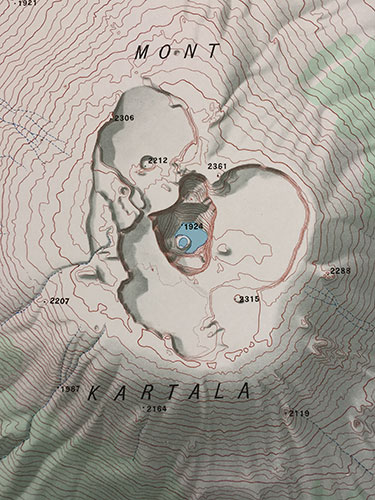 Images taken from aeroplanes were soon joined by those taken from satellites, after the launch of Sputnik by the Soviet Union in 1957 sparked the Space Race between themselves and the USA. The speed of technological developments over this period is encapsulated in the three images following. This annotated photograph taken from a military aeroplane in 1936 captures the curvature of the Earth for the first time, and shows the highest point then reached by man. 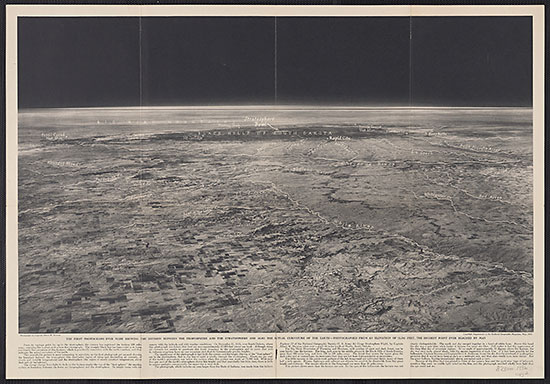 The first photograph ever made showing the division between the troposhere and the stratosphere and also the actual curvature of the earth, National Geographic Society, 1936. BL Maps Y.84. Image courtesy Beinecke Rare Book & Manuscript Library. 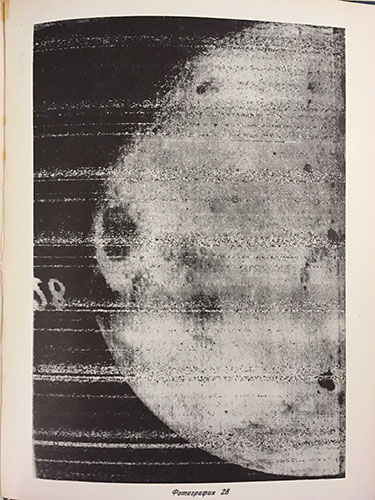 Within the next ten years man too had travelled round the moon. American astronaut William Anders took this iconic photograph, which looks back at the Earth as it rises above the lunar surface – an image of the world that had previously been possible only in the imagination. 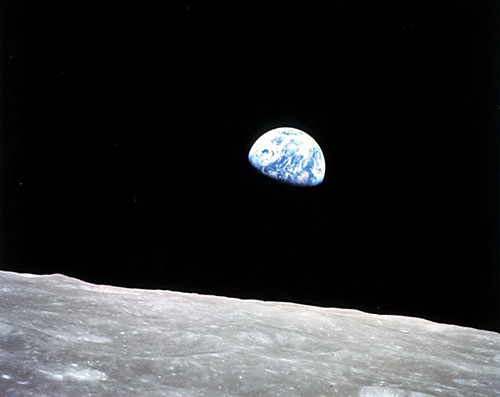 Both the Soviet Union and the USA launched military reconnaissance satellites during the early 1960s that were capable of creating high resolution imagery for intelligence and mapping purposes. Civilian satellites followed, perhaps the most successful of which was Landsat, launched by the USA in 1972.

Multispectral satellite imagery became an essential feature of land survey and resource management, leading to a proliferation of thematic maps, and a new category of mapping under the title satellite image maps. The ease with which satellite imagery could track changes over time in the environment also brought new insights to many areas of study, including urbanisation, de-forestation, analysis of weather systems, and ocean dynamics. 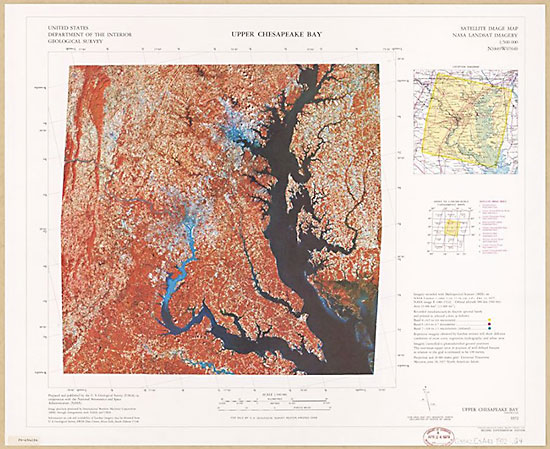 Nowadays aerial photographs and satellite images are ubiquitous in digital mapping products that have become a common feature of everyday life. 2001 saw the launch of Google Earth, an application in which satellite imagery and aerial photography are draped over digital terrain models to provide interactive three-dimensional map views. 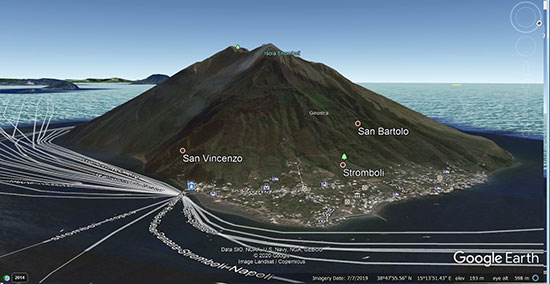 In other applications, maps and photographs are now interchangeable - users can choose between map or satellite viewing modes. 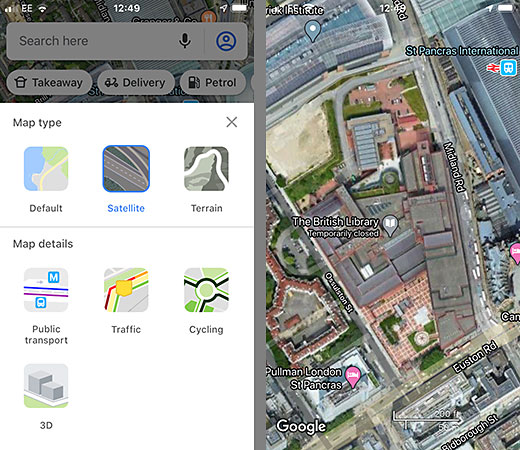 Google Street View, launched in 2007, integrates terrestrial photography and cartography to create a model of the world from a horizontal viewpoint – a mode of representation with antecedents in artworks of former times. In the early 1900s, Eugène Atget started to make images of the older parts of Paris with the intention to record streets and buildings that risked being torn down and re-developed. By 1920 he was able to write, ‘This enormous artistic and documentary collection is now complete. I may say that I have in my possession all of Old Paris’. 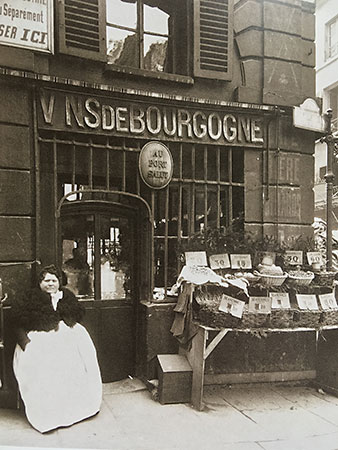 Half a century later, American artist Ed Ruscha created an artwork entitled Every Building on the Sunset Strip by fixing a camera onto the back of his truck and driving up and down as it took pictures on a timer. His intention was to recreate the experience of moving through the landscape. 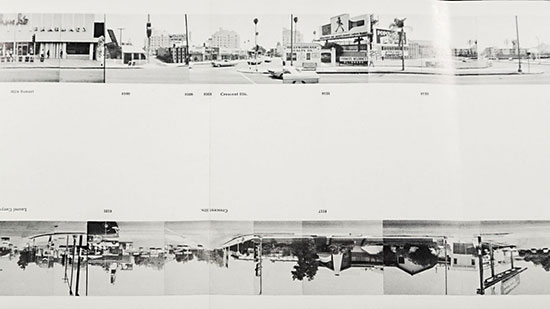 Every Building on the Sunset Strip by Ed Ruscha, 1966. Image courtesy National Gallery of Australia.

Google Street View now also employs cameras fixed to cars, or strapped to pedestrians’ backs, to create strips of 360-degree images stitched together. The artistry and focus on aesthetic have been lost in these pictures made by machines, but those qualities have been replaced by functionality. Google’s georeferenced, navigable imagery allows users to search and interact with a vast database of (mainly business) information. The corner building shown below, tagged so that one can choose to see the menu or make a booking at the restaurant within, is the same as that in the Atget photograph from 100 years before. 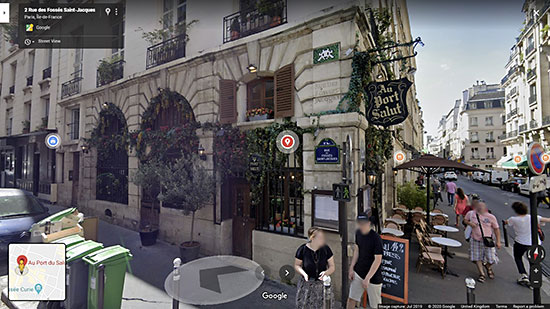 The perceived realism of digital maps and photographs makes them particularly persuasive. However, two posts reproduced from Twitter, below, document conflicting facts about the shooting down of an American drone by Iranian forces in June 2019. The first, published by US Central Command, shows the drone flying through international, not Iranian, airspace when it was hit, while the second image, posted the following day by the Foreign Minister of Iran, shows the drone in a different location, within Iranian airspace. 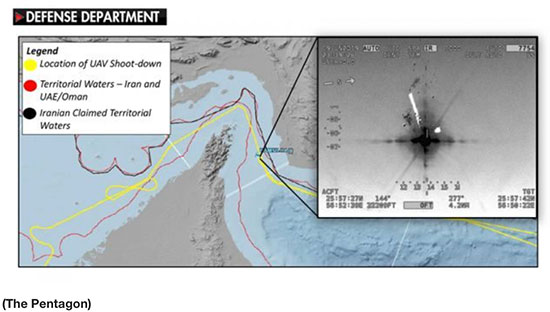 Screenshot of Image posted by US Central Command on Twitter, 2019. 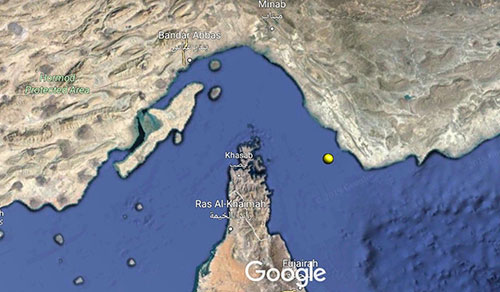 Image posted by Foreign Minister of Iran on Twitter, 2019.

This incident reminds us that the latest generation of maps and images remains as susceptible as any before to manipulation or exploitation.

Today more than ever, maps and photographs go hand-in-hand in our ceaseless attempts to capture, model, and mould the world around us.