Welcome to the British Library’s world map world cup, and this the first of four qualifying groups. Vote for your favourite over on Twitter (@BLMaps) . The top two maps will go through to the quarter finals on Friday.

Here's more information on the maps if you need help deciding!

The Psalter map was probably drawn in Westminster in around 1265 and is almost certainly a miniature (15 cm high) copy of Henry III of England's large mappamundi that adorned his palace in Westminster. Although it is included in a prayer book (psalter) it is now believed that it  was added to the book later. There is a second map on the verso of the leaf, which shows the world in T-O form, with Christ trampling underfoot the dragons shown at the bottom of this map. 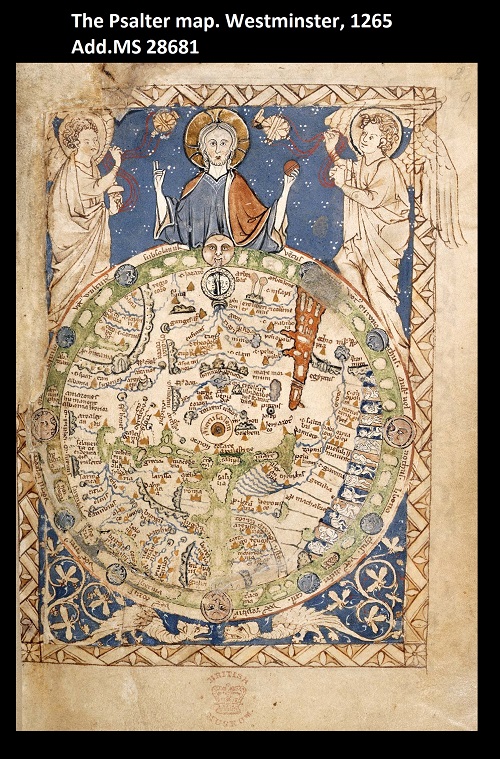 The first printed maps made according to 2nd century Claudius Ptolemy's geographical tables were produced in Italy in 1477. But the earliest surviving 'Ptolemaic' maps were hand-drawn in Constantinople and Greece, where Ptolemy's information arrived via the Islamic world at the end of the 13th century. The earliest known copy is in the Vatican Library (Urbinas Graecus 82). The British Library has 3 manuscript copies of Ptolemy's Geographia illustrated with maps. This is a portion of the codex drawn in the Vatopedi monastery on Mount Athos in Greece.

Further reading: O.A.W. Dilke, 'The culmination of Greek cartography in Ptolemy' in The History of Cartography volume one (Chicago: Chicago University Press, 1987). 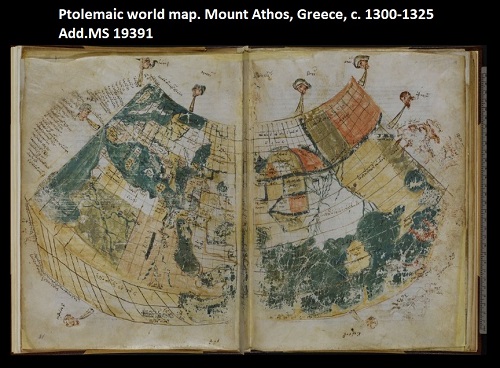 The Bankoku sōzu maps are an elite group of Japanese world maps from the 17th century . These maps show a variety of influences including Chinese and European (which is significant given Japan's insular policy at this time). The maps were designed to be displayed on walls with east at the top, next to an accompanying print of 40 ethnographic portraits known as a Jimbutsuzi.

Further reading: Elke Papelitzky, 'A Description and Analysis of the Japanese World Map Bankoku sōzu in Its Version of 1671 and Some Thoughts on the Sources of the Original Bankoku sōzu' in Journal of Asian History (48:1, 2014) 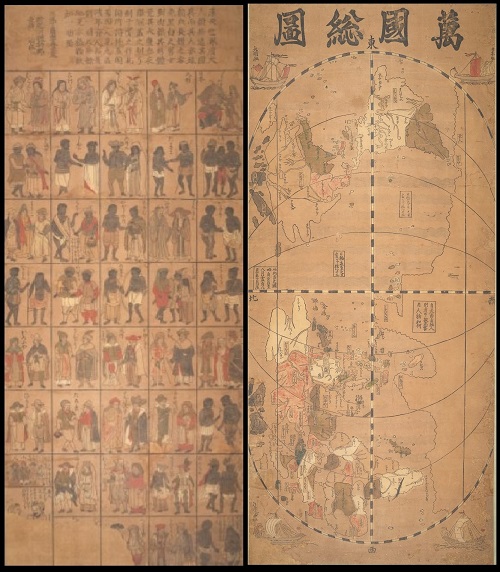 Thomas Jefferys large multi-sheet copper-engraved double hemisphere map is one of a number of such maps produced by English mapmakers during the 18th century. Everything about its content is focused upon trade, and features of the world such as magnetic variation and trade winds that made trade possible (though there is no mention of the more deplorable aspects of British 18th century imperialism). The map is the centrepiece of a large pine screen, a piece of furniture that would have populated the home of a merchant. 20 other maps are pasted onto the screen, which would likely have served an educational, as well as a cultural purpose. 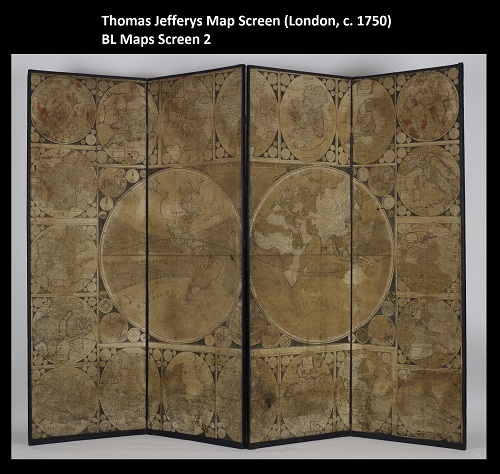