In every world cup there tends to be a group of death. This group is the football equivalent of Brazil, Germany, Argentina and Spain all together. So I hope the following descriptions, links and images will provide you with what you need to choose between them.

Vote for your favourite over on Twitter (@BLMaps). The top two maps will go through to the quarter finals on Friday. This map is an extraordinary hybrid between a traditional 'mappamundi' and a portolan or sea chart. It was drawn by the Genoses chartmaker Pietro Vesconte to illustrate Marino Sanudo's mysteriously-titled book 'Secret book of the Faith of the Cross.' The book was presented to Pope John XX in order to persuade him to give his blessing to a Christian Crusade to invade the Holy Land. Other maps in the book illustrated the route to the Holy Land and the goal of the proposed mission: Acre and Jerusalem.

The world map is particularly clever because, most unusually, it consciously played down Christian iconography in order to present the Pope with an image of Christianity in crisis. 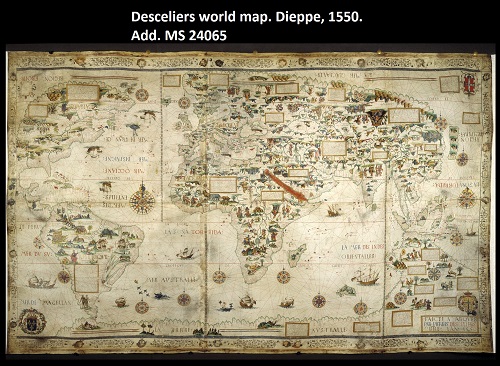 Descelier's map is perhaps the crowning achievement of the Dieppe School of French chartmakers; a large planisphere focused upon navigational information (it has dual orientation indicating that it was to be viewed upon a table) but also corresponding to the idea of a visual encyclopedia of everything occurring in the world. The map contains the arms of Henri II of France and the Duc de Montmorency and could have been owned by either. Of particular interest is its depiction of areas of North America then only recently encountered by Jacques Cartier and the unusual arrangement of South East Asia and Australasia entitled Java La Grande that would flummox Europeans up to and beyond the journeys of James Cook two centuries later, 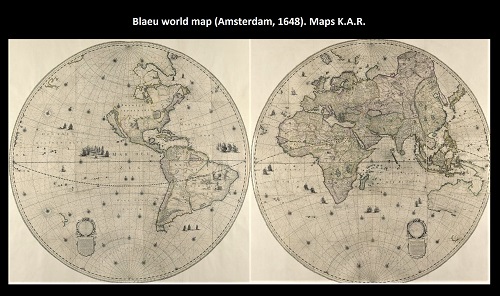 Blaeu's gargantuan map is regarded as the high water mark of Dutch cartography, and that's saying something given the quality of 17th century Netherlands cartography. There are two main reasons for this high regard. Firstly, the technical skill and artistry involved in creating such a high-quality printed map over 3 metres wide. The second is the range and quantity of first-hand geographical information it shows. Blaeu was chief cartographer of the Verenig Oostindische Compagnie (VOC), charged with compiling charts from the latest information gathered from company ships. Instead of secreting this commercially sensitive information like the Portuguese and Spanish did, Blaeu stuck it on a publicly available map. For the Dutch, nothing was more important than business.

The map was used as the model for the giant floor mural of Amsterdam Town Hall. There are a small number of copies still in existence, this one was owned by Charles II. 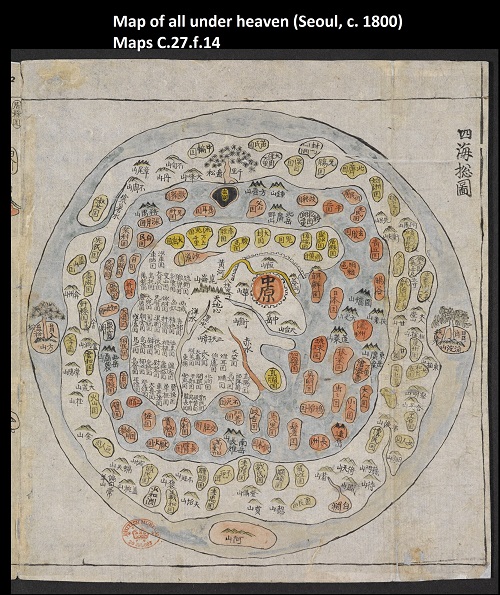 This incredible map, which is part of a set of maps showing the world and regions of Korea, is one of select group of Korean world maps produced during the late 18th and 19th centuries. They show the world oriented to the east and centred upon East Asia. Look carefully and you can make out the eastern coast of China, Beiing a large red symbol, with the yellow river and Great Wall nearby. The rest of the world are scattered islands on the periphery. These maps were far more basic than earlier Korean-produced maps, and it has been suggested that one of their intended audiences was tourists.