UK hydrographic charts published by the British Admiralty in the early twentieth century are notable for the high density of information compressed within their two dimensions, and for the harmonious blend of registers and visual perspectives they incorporate in the pursuit of clarity. Whilst documenting local visual navigation techniques handed down over the centuries, charts from this period also feature networks of lights, beacons and buoys more recently installed around the coastlines of the British Isles.

This example, first surveyed and published through the Hydrographic Office in 1847, shows the bays of Long Island and Baltimore in West Cork, Ireland with information updated to 1909. 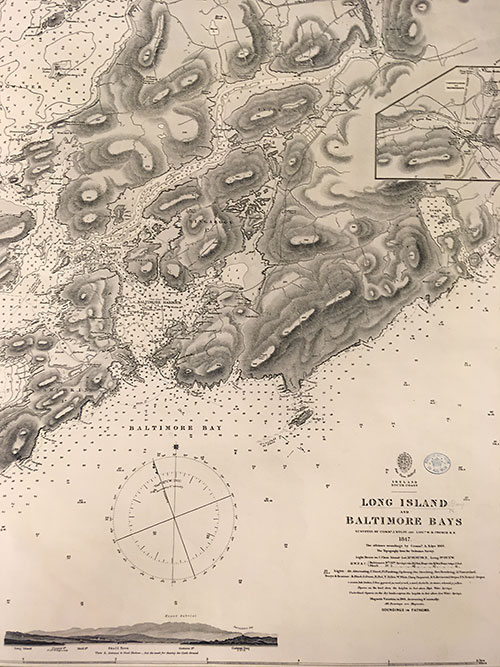 As the seabed rises towards land, the approaching navigator is assisted by depth soundings, and abbreviations that tell the composition of the seabed at each point – sand, shells, gravel... The original measurements were taken with a sounding line marked along its length in fathom intervals, that was dropped over the side of the survey vessel. The lead plummet at its end was covered with sticky pitch or tallow that brought up a sample of the sea floor beneath.

Some of these data points cluster around and almost interfere with the map title. Navigators would use these measurements to inform the plotting of their routes and, by dropping their own sounding lines, would attempt to pinpoint their location. 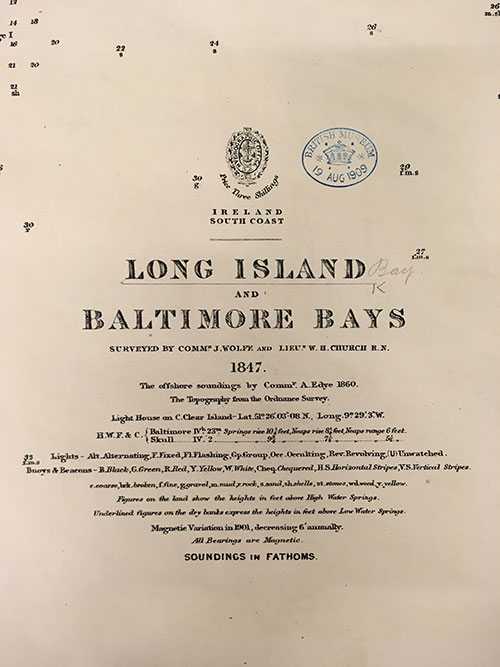 Along the bottom edge of the sheet, a sketch testifies to a tradition of visual navigation techniques that have persisted even through the introduction of electronic aids later in the century. ‘View A’ provides a perspective in silhouette of the entrance to Skull Harbour, and demonstrates how Cosheen Crag in the foreground should be lined up with Barnacleeve Gap on the horizon in order to avoid rocks at Castle Ground on the way in. This horizontal view nestles on the page between the scale bar and a compass rose, while further soundings caught in-between call for a vertical viewpoint. 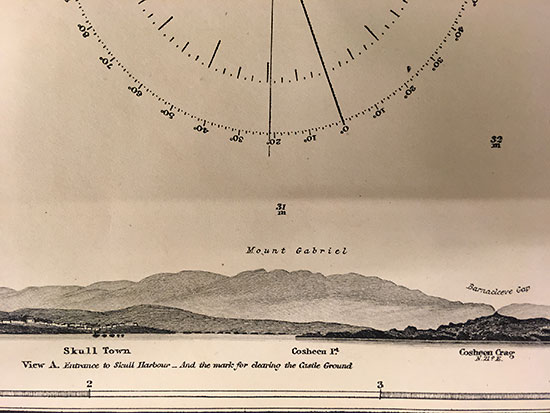 The correct angle of approach to Skull Harbour is also marked with a line across the chart. A number of other sightlines bisect the chart at various points, guiding seafarers past areas of danger. 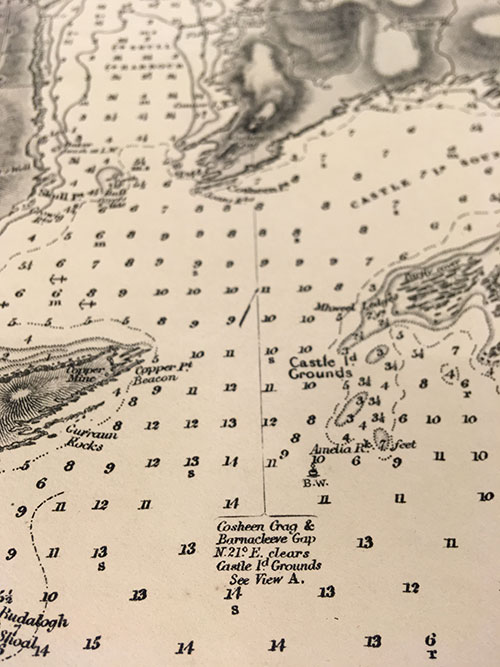 More recent networks of buoys, beacons and lights also appear - in an update to earlier editions a light has been added at the western entrance to Baltimore Harbour. The chart indicates a wide arc facing southwards and out to sea from which the light appears white, and the crossover point upon entering the harbour from which the same light shows red. 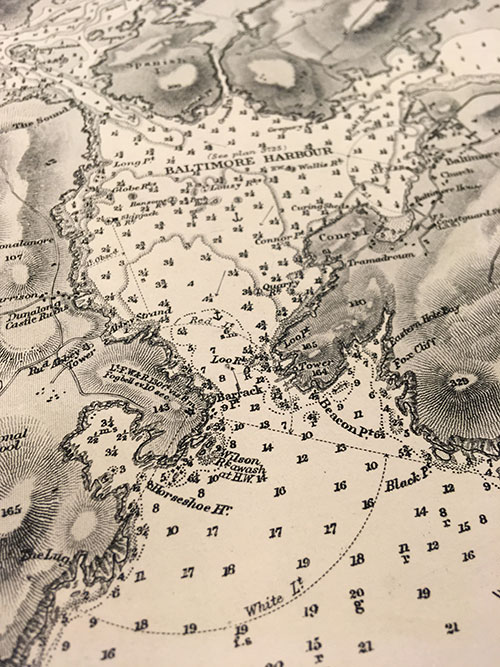 For a distance inland, just enough of the topography - relief, landmarks, buildings and communications - is provided that might be of use to a vessel and her crew, before the detail gradually rubs to a blank on the chart.

The visual attraction of these sheets lay in the skill of the production draughtsmen whose finished drawings were transferred to copperplate for printing. From the late 1960s a programme of modernisation was introduced to update Admiralty Charts with metric units, simplified lettering and colour washes – a palette of blues for different water depths, and buff for the land – a style that persists to this day.