The Great Fire of London in maps

On the 2nd September 1666 a fire started in a bakery in Pudding Lane near London Bridge. The flames quickly spread to neighbouring buildings and within a few hours the fire was out of control. Owing to the long period of drought and strong wind the fire burnt wildly for four days consuming the city. When it was finally extinguished on 6th September two-thirds of the City of London within the perimeter of the Old Roman Wall was completely devastated. Only a handful of buildings remained with almost all houses, public buildings and churches burned to cinders.

A true and exact prospect of the famous Citty of London from St. Marie Overs steeple in Southwarke in its flourishing condition before the fire by  Wenceslaus Hollar. London, 1666. Maps K.Top.21.36.

The event was described in detail by eye witness accounts which included those recorded by well-known figures such as Samuel Pepys and John Evelyn. Their accounts together with maps created soon after the fire provide a more complete picture of the disaster.

The Great Fire of London made news throughout Europe. The near destruction of the capital raised huge interest among the general public. Publishers quickly realised the commercial potential in this catastrophe and over the following months numerous maps were issued informing the national and international audiences eager understand the scale of the disaster. 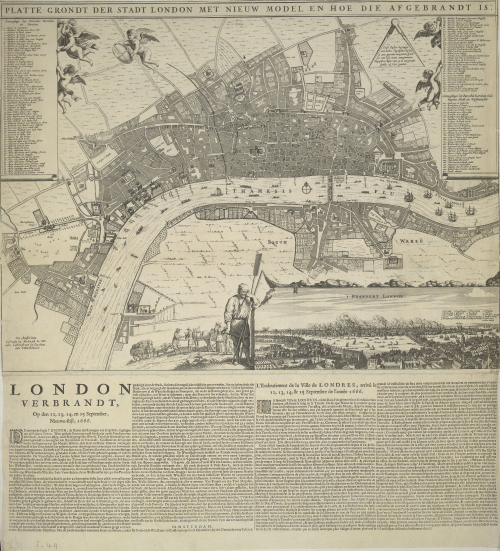 These maps were often accompanied by a detailed description of the event and included a panoramic view showing the City in flames. The extent of the destroyed area was represented either by a dotted line or just a blank empty space – a sobering reminder of the scale of the tragedy.

As soon as the flames were extinguished efforts were undertaken to map the extent of the damage and to aid the recovery and rebuilding of the City for the future. A group of determined surveyors lead by John Leake commenced work by drawing up plans of the destroyed perimeter. The resulting multi-sheet survey was presented to King Charles II just six months after the fire and a reduced version engraved by Wenceslaus Hollar was issued in print in 1667. 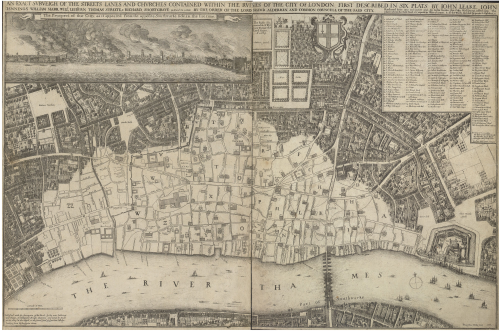 AN EXACT SURVEIGH OF THE STREETS LANES AND CHURCHES CONTAINED WITHIN THE RUINES OF THE CITY OF LONDON... by John Leake, engraved by Wenceslaus Hollar Maps Crace Port. 1.50.

The disaster was seen as an opportunity to redesign the City in an improved form and a number of ambitious proposals were submitted for consideration to the City council and the King. Many of these proposals echoed the architecture of the famous European capitals and included improvements such as new street layout with wide boulevards and piazzas, majestic designs for public buildings and a regularised river front. 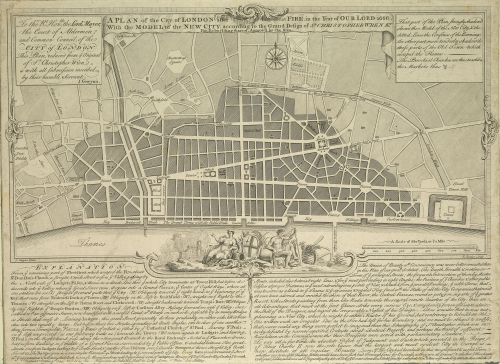 A plan of the City of London after the Great Fire, in the year of our Lord 1666, With the model of the new City, according to the Grand Design of Sr. Christopher Wren. London, 1749. Maps Crace Port.17.5.

These grand ideas were rejected mainly due to financial constraints and London was rebuilt on a very similar grid as before the fire. Christopher Wren played a big part in reconstruction of London with many churches constructed to his design including one of London’s most famous landmarks St Paul’s Cathedral. To commemorate the Great Fire of London a 202 feet tall column called the Monument was built near the location where the fire started, a permanent reminder of the horrific event. 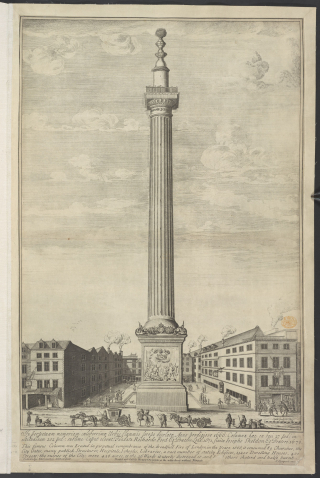 Monument to the Great Fire of London by William Lodge, published by Pierce Tempest. Maps K.Top.24.16.a.

Posted by Magdalena Peszko at 4:07 PM