You may already be aware with all the recent publicity surrounding the release of the first batch of images from the King’s Topographical Collection that this is indeed an incredible resource with countless unique maps and views. I thought I would share with you some of my favourite items which I think are wonderful examples you may encounter while browsing the collection. Fascinating not only because of the unusual format of some of the items or unexpected subject matter but also the fact that they provide a glimpse of what was interesting and worth collecting back in the 18th and 19th centuries. With 18,000 images available on Flickr there is plenty to discover! 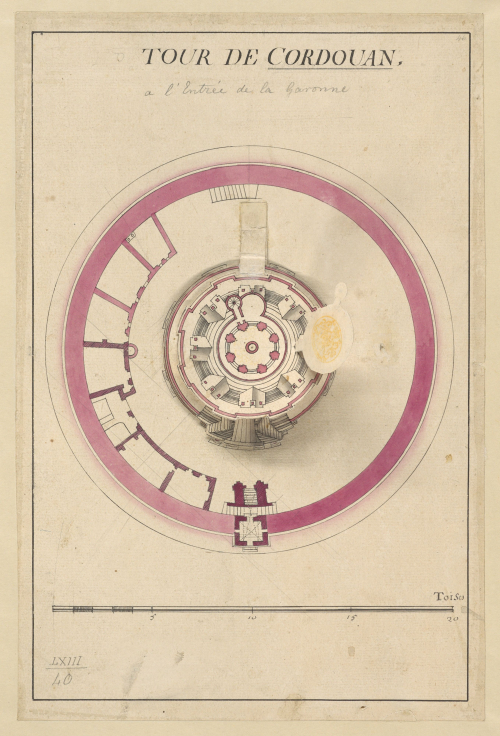 This 17th century intricate architectural drawing shows the structure of the Cordouan lighthouse (Phare de Cordouan). What is unusual about this drawing is the use of flaps which are pasted over a round base representing the building. These flaps can be lifted to reveal a detailed layout of the various levels of the lighthouse.

Phare de Cordouan is situated at sea near the mouth of the Gironde Estuary 4.3 miles off the French coast and was constructed in 1611 to Louis de Foix, the royal engineer’s design. The original structure comprised of five storeys and included the grand entrance hall, King’s chambers, a chapel, apartments for the keepers and, of course, the lantern itself. The entire building was richly ornamented with particular attention paid to grand décor and its unique design became a symbol of power. Phare de Cordouan is one of the oldest lighthouses in France and is still in use today. 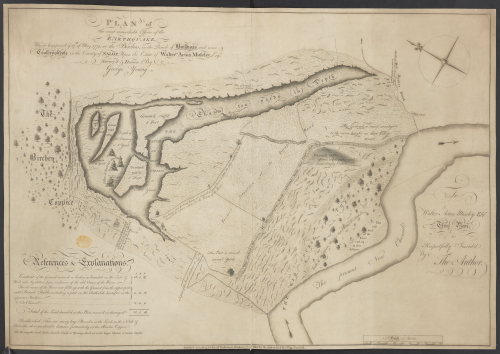 Maps K.Top.36.24.2.b. Plan of the most remarkable effects of the earthquake, which happened ye 27th of May, 1773; at the Birches, in the Parish of Buildwas and near Coalbrookdale in the County of Salop… 1773.

This unusual map represents an aftermath of a geological event which occurred in 1773 near the village of Buildwas in Shropshire. The eye-catching title resembles a sensationalist headline style although soon after the event it was established that the cause was a landslip rather than an earthquake - in the mapmaker’s defence the term earthquake was used occasionally to describe a landslip in the late 18th century. Whatever the cause, the map is a contemporary record of an event that significantly changed the local landscape and impacted the community.

It delineates the extent of the damage including the pre- and post- earthquake configuration of the area such as the road location, the old and the new course of the River Severn, as well as the chasms and areas where the ground was raised. The force of water damaged the existing bridge which was eventually replaced in 1796 by a cast iron bridge built to the design of the Scottish civil engineer Thomas Telford (it was actually his first iron bridge). The map was published just four months after the event in the context of an inquiry into the reconstruction of the turnpike road and the river channel. 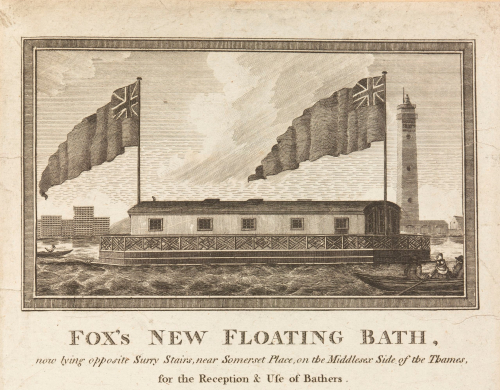 Maps K.Top.27.41.7. Fox's new floating bath, now lying opposite Surry Stairs, near Somerset Place, on the Middlesex Side of the Thames, for the Reception & Use of Bathers. About 1810.

This rare ephemera from the beginning of the 19th century advertises an innovative and rather bizarre concept: a boat specifically constructed to serve as public baths. Conveniently moored on the River Thames in central London this floating facility would be ‘the compleatest and best adapted of its kind for bathing in England’.

The adventurous entrepreneur worked out all the logistics explained in the accompanying text. The floating baths would be made available on a subscription or a single-entry basis and serviced by watermen transporting the bathers to and from the boat. There was a promise of a pleasant experience in the stylish décor and even health benefits claiming that the facility was recommended by doctors. These were rather doubtful claims as bathing in the Thames surely could not be beneficial considering how polluted the River was in the 19th century. There is no record that such a boat was ever constructed but the idea was realised on a much larger scale later in the century when in the 1870s floating baths opened on the Westminster embankment with water filtering systems in place. 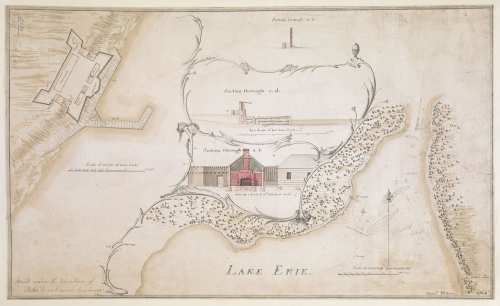 Maps K.Top.119.17. [A coloured chart of the upper part of Lake Erie at Fort Erie and a detailed plan of Fort Erie, together with three cross sectional drawings]. 1764.

This manuscript plan of Fort Erie (Ontario, Canada) is a prime example of fine draughtsmanship. It has an artistic element to it with lot of attention paid to aesthetics. The plan incorporates the fortification elements drawn to different scales to fit the sheet without making it look overcrowded. Produced by Franz Pfister an engineer and an accomplished surveyor with a military purpose in mind, it provides an insight into 18th century fortification design techniques and shows in detail individual structures including cross sections and views of buildings.

Fort Erie was constructed on the north-western shore of Lake Erie in 1764 after the Seven Years’ War when Great Britain gained the territories in New France. It was the first British fort built in order to establish a communication network between the Niagara River and the Upper Great Lakes and played a significant role as a supply depot for the British troops during the American Revolution. 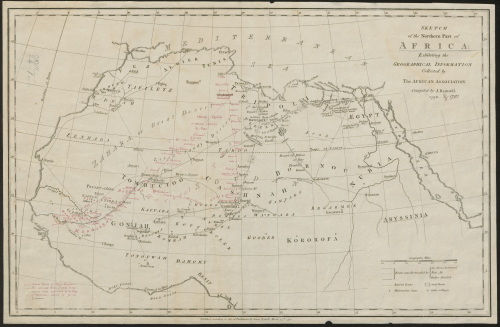 Maps K.Top.117.24.1.a. Sketch of the Northern Part of Africa Exhibiting the Geographical Information Collected by the African Association. Compiled by J. Rennell. 1790. & 1792.

This printed map is a great example that demonstrates the process by which maps were brought up to date. It was prepared for the Association for Promoting the Discovery of the Interior of Africa and contains manuscript annotations displaying the new geographical detail acquired by Major Daniel Houghton during his expedition of 1790-1791. The updates include amendments to spelling of place names, corrections of positioning of settlements, the courses of rivers, as well as extent of lakes and mountain ranges.
The map along with the accompanying handwritten Memoir and a letter from Henry Beaufoy a secretary of the Association, to Sir Frederic Barnard, George III’s librarian, constitute a primary resource on Houghton’s expedition. The documents reveal that the expedition was not strictly a geographical enquiry. Major Houghton also investigated the feasibility of establishing a trade route, commercial prospects and potential demand for commodities which could be supplied by the British including military equipment and supply of ammunition.

Posted by Magdalena Peszko at 1:55 PM