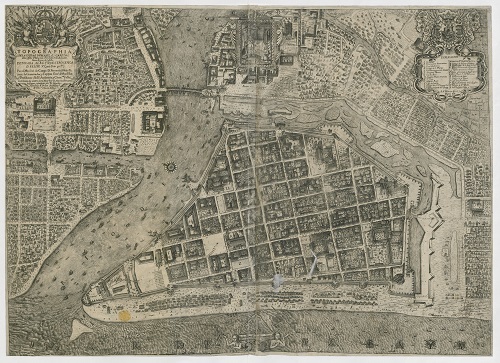 This is the only recorded example of this 1739 edition of the 1717 town plan of Manila in the Philippines. Manila was, and is, a key international centre of trade, and the map was actually produced in the town (in a tiny vignette we can see a copy being presented by the Spanish governor of the Philippines to King Philip V of Spain). There’s probably no better image of a bustling commercial site, proof that a town is not just about its architecture and layout, but its people and processes too. This map has additional resonance, because Manila was besieged and looted by the British in 1762, and annotations in the map’s bottom right refer to aspects of the battle. Could it be George himself annotating the map according to reports he had received of the battle? 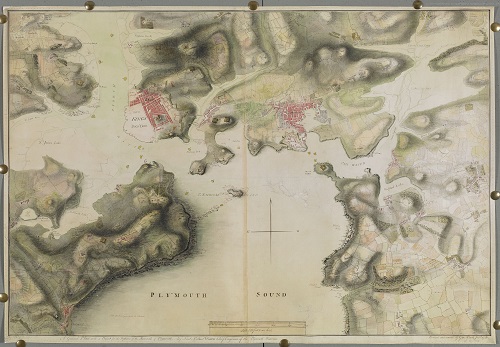 This is the map that reminds me most of the strong links between mathematics and art in maps. It’s a large and serious military drawing, officially commissioned and with an accompanying report, of a key strategic naval installation and site of British maritime strength and power. It was drawn up as part of the earliest mapping activities for what would become the Ordnance Survey a few years later, enacted in response to the threat of invasion from Napoleonic France. So why is it so stunningly and mesmerizingly beautiful? It’s a question that should infuriate everyone who sees maps purely as cold communicators of facts and 'data.'

Matthew Dixon, Colonel, surveyor.
‘A General Plan with a Project for the Defence of the Arsenals of Plymouth, / By Lieut: Colonel Dixon Chief Engineer of the Plymouth Division. Revised and corrected by Geo. Beck Jan. 1780.’ 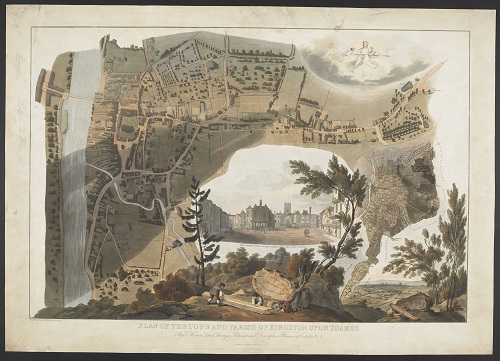 Is it a map or is it a view? What is that ominous large shadow looming in, Holbein-like, from stage left? Who cares! This is an intriguing and brilliantly composed aquatint print showing a collection of views of picturesque Kingston-upon-Thames. From above, in profile, from a distance away, it’s a multi-faceted image that invites us to dissolve our perception of the differences between vistas and to see them as a combined and rounded description of a place. Cartographic cubism! As Horner himself wrote, ‘…the whole, blended into one design by a picturesque fore-ground, forms a faithful view of the parish.’ It’s a joyous visual experience, with a few intrigues and little jokes (note the bungling surveyor- stonemasons in the foreground) thrown in for good measure. 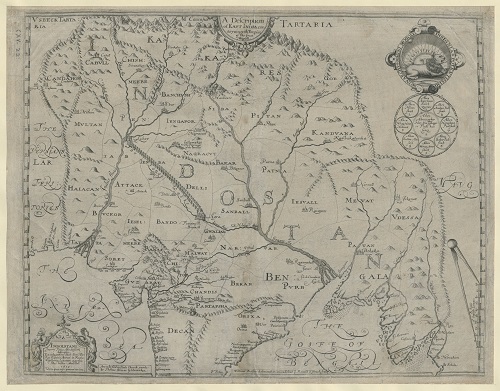 This is a portentous map - the earliest British printed map of part of India. It marks the beginning of British cartographic involvement in India that would reach new levels of science-led imperial control through mapping by 1900. The Roe-Baffin map was produced following the earliest English trade mission to the Mughal empire. It has a stellar cast: Sir Thomas Roe, the diplomat who headed up the embassy. William Baffin, the navigator who went on to attempt to locate the North West Passage (Baffin Island is named after him). Reynold Elstrack, one of the earliest native English engravers.

The map was one of very few English-produced maps to provide a model for later Dutch atlas maps by Blaeu, Janssonius and others. English mapmakers were more often the copycats. The engraving of a Mughal seal has been expertly assessed by the British Library’s Dr Annabel Gallop. 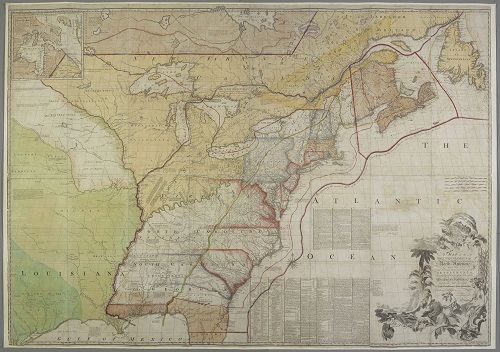 This is a map with a story and a reminder of the power – and paranoia – that can be associated with maps. John Mitchell’s map of ‘the dominions of North America’ is a tremendous cartographic achievement in its level of description of this vast area. Yes, standing on the shoulders of earlier maps, but adding a vast quantity of descriptive notes and even including naming Native American nations (who were nevertheless ignored in what followed).

On another level, this late edition of the map is a piece of history, being the copy used by the British delegation at the 1782 Treaty of Paris where the terms of the peace following Britain’s defeat at the hands of the United States were established. The map has been marked up in red to show the lines of the new border the British would be happy with. But at the conference they realised that they didn’t have to cede quite as much as they had drawn. The map suggests that Upper Canada (much of modern-day Ontario) was also available to the USA. So later the British government ordered the British Museum to lock the map away so that nobody, particularly no inquisitive Americans, might see it and demand any more.

It was hidden from view until the early 20th century.

John Mitchell, 1711-1768, cartograph.er. A MAP of the BRITISH COLONIES in North America…

[London] : Publish'd by the Author Feb.ry 13.th 1755 according to Act of Parliament : Printed for Jefferys & Faden Geographers to the KING at the corner of S.t Martins Lane Charing Cross London, [about 1775, with annotations to 1782].