Last week another temperature record was set in Sydney, Australia – the overnight minimum temperature of 25.4 degrees Celsius was the highest ever for November, higher even than the historical daytime average for the month. This is one of a string of new records set there over recent years. 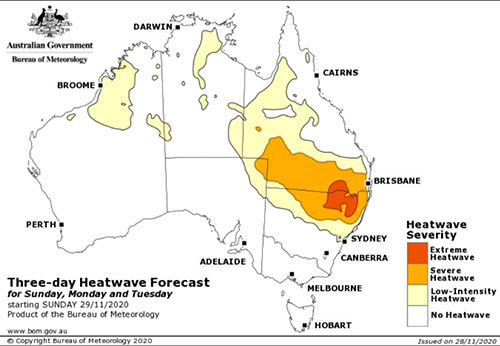 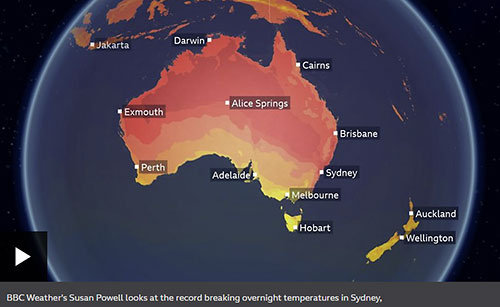 Graphics courtesy of Australian Government Bureau of Meteorology, above, and BBC, below.

With heat comes the risk of bushfires, which have once again started to burn across the region, reminding us of the catastrophic fire season that was experienced last year - now known as ‘Black Summer’. In total an estimated area of between 18 and 24 million hectares burned - comparable in size to the area of Great Britain - with the loss of 34 lives, over 3,500 properties destroyed, and estimates ranging from one to three billion mammals, birds and reptiles killed.

This map depicts the state of fires in the region around Sydney on one of the worst days of the crisis, and was issued to the public through the New South Wales Rural Fire Service website to encourage evacuation from areas under immediate threat. The British Library imaging studios made a large format print from the file to be kept in the maps collection. 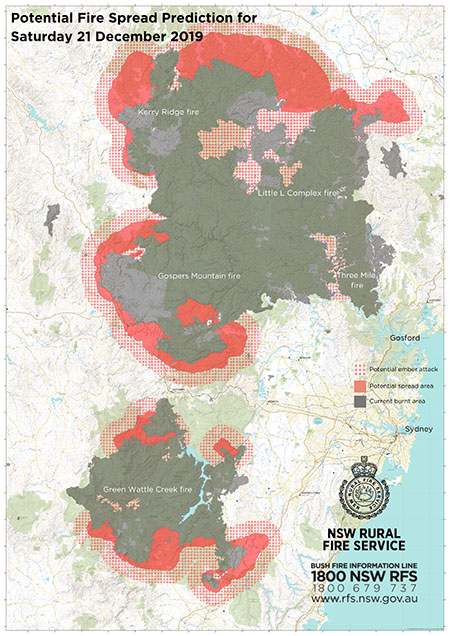 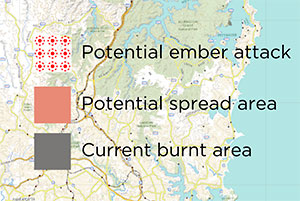 The area shown extends around 150 miles from north to south. In particular the map indicates the plight of towns along the Great Western Highway in the Blue Mountains, to the west of Sydney, which are caught between bushfires to the north and to the south. The prediction shows the highway being cut off by fire to the north-west of Katoomba, and the outskirts of Katoomba, Leura and Wentworth Falls falling under threat from ember attack, which forced large numbers of inhabitants to evacuate eastwards to Sydney. 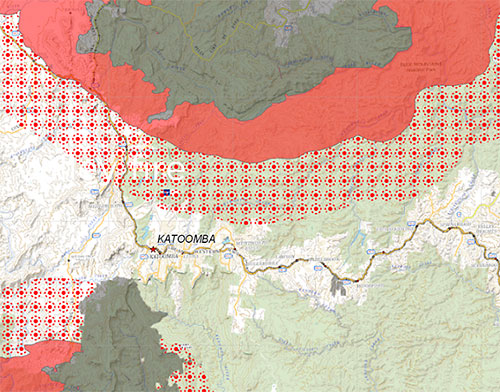 Fortunately the worst did not come to pass, and over the following days back-burning operations – where controlled fires are started ahead of the oncoming blaze to deprive it of fuel – kept the fire fronts largely at bay. Some of these can be seen in irregular dark areas of burning to the north-east of Katoomba on a screenshot of the Rural Fire Service’s ‘Fires Near Me’ mobile site. 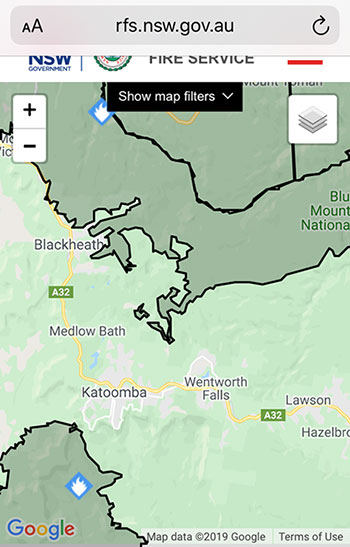 It was not until torrential rains fell in early February that these fires were finally extinguished.

Debate continues around what caused the fires to be so extreme. By June of 2019 record high temperatures and longstanding conditions of drought had led experts to warn of an extended fire season to come, and many attribute these underlying conditions to climate change.

Others also point the finger to an alleged reduction in the use of fire management techniques learned from, and still practised by, Indigenous people. This map of Arnhem Land in northern Australia shows the results of a collaboration between scientists and Indigenous people, where the frequency of ‘hot fires’ has been reduced in areas deliberately burned during the previous cold season. Whichever factors led last year's fires to be so extreme, most agree that bushfires are an inevitable part of Australian life. An ambition harboured by many, perhaps, but that is yet to be achieved, is expressed by the author of a 1976 study, 'Bushfire: history, prevention, control' (BL HMNTS X.322/8372) - ‘Fire has been part of the Australian environment for a very long time. I hope that... this book conveys the sense that fire and man must live together, not in a master/servant relationship, but as co-habitants in a finely balanced environment.’

Only yesterday, the Secretary General of the United Nations, Antonio Guterres, declared, ‘Our planet is broken. Nature always strikes back and is doing so with gathering force and fury’. We can only hope that the fire season to come is not like the last.