2020 has certainly been a year for maps, though not one for which any of us will feel grateful. I’m referring to the proliferation of often doom-laden public maps illustrating the spread (and receding – more of this please) of Covid-19 across the UK. Throughout the year, interactive maps have appeared on online media outlet pages, and most prominently, maps have featured along with graphs and charts in daily government briefings into the official response to the virus. 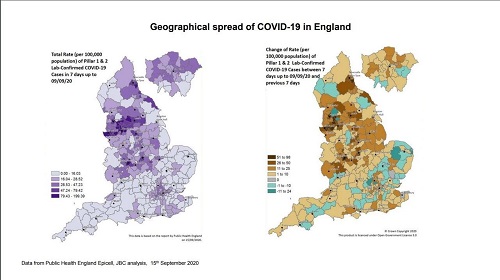 Geographical spread of Covid-19 in England, 15 September 2020. Taken from the Coronavirus daily briefing slides of 21 September 2020

Data visualisations have played an important role in keeping the public informed, and for demonstrating the scientific evidence behind the adoption of measures to combat the pandemic. Occasionally the quality of data visualisation has not been to standard. Professor James Cheshire of UCL Geography has written about this, providing some cardinal rules such as ’explain your working’ and ‘keep it simple.’

This latter rule has been well understood by the makers of public maps for centuries. Before the computer screen, maps had to work hard in order to be legible and intelligible by large groups of people from potentially large distances away. From the 1840s in the UK, large maps were specifically designed with bolder lines and reduced information in order to function, for example, in large elementary school settings. 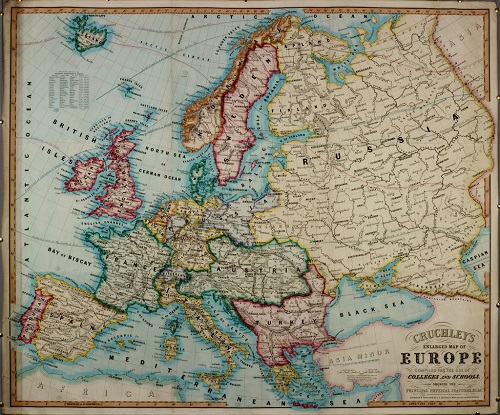 George Frederick Cruchley's school room maps were large and specifically bold productions for use in large spaces. Cruchley's enlarged Map of Europe. Compiled for the use of Colleges and Schools. London, 1851. Maps STE 167

Large maps were also used as backdrops for large gatherings and meetings. Remember those? 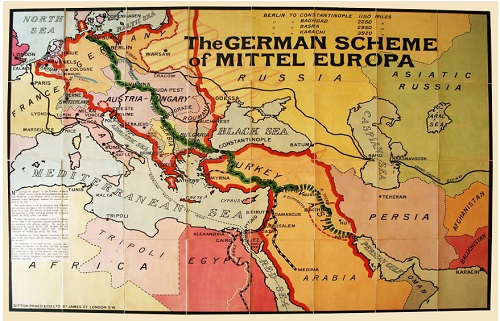 This large map of 1916 showing the projected Berlin-Baghdad Railway, almost 3 metres wide, was used as the backdrop for public lectures on subjects such as 'Why Germany Wanted War.' Sifton-Praed Ltd., 'The German scheme of Mittel Europa.' London, 1916.

If you want your map to be seen and understood by a lot of people, make it as clear as possible.  Of course, this isn't always practical: nobody wants to be accused of ‘dumbing-down’. And there is no getting away from the fact that geography is complicated and maps can be misleading, particularly when it involves mapping people who are neither static nor evenly spread. Thus the map of the UK divided into counties or regions and coloured by numbers of Covid cases per 100,000 people is falsely reassuring: large, rural and comparatively Covid-free counties dominate visually over smaller, more concentrated and consequently more affected urban areas (tools such as inset maps, and more arresting colours and tones, each of them subjective in their own way, have helped).

Though there were earlier attempts, it was only really towards the end of the 20th century that algorithms enabled population figures (such as UK census data) to be visualised spatially in digital maps. For some examples, see the cartograms from Danny Dorling’s ‘New Social Atlas of Britain (1995) and also ‘Worldmapper’ Tina Gotthardt and Benjamin Hennig’s terrific up-to-date world cartograms where the size of a state is visualised in human terms, such as the relative size of its population or, as here, its proportion of confirmed Coronavirus cases over a particular period. 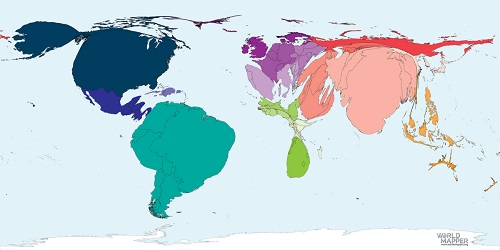 Maps need to be clear and understandable. But of course there’s also a lot to be said for complexity. People like scientific data, and this year has been big year for science and its associated debates. Historically, there are no shortage of maps whose creators have clearly delighted in cramming as much scientific content into them as possible, even to the point of confusion. We might call this the rhetorical use of science in maps, the deployment of science an alluring device to emphasise the accuracy, seriousness or reliability of what is being shown, or even as a self-promoting device used by a mapmaker to demonstrate his or her scientific acumen. 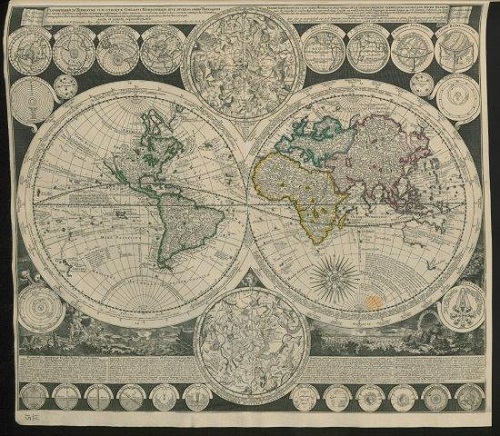 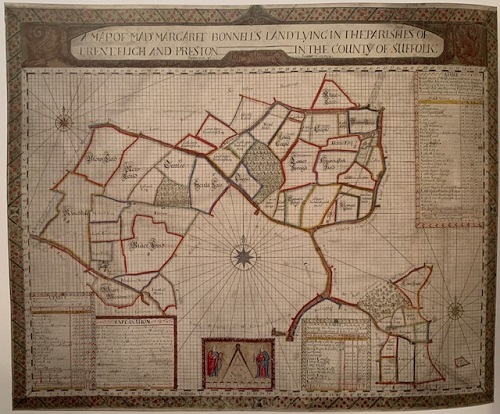 Isaac Causton's 1719 estate map of part of Suffolk lays it on somewhat heavy with the grid. 'A map of Madm Margaret Bonnell's land lying in the parishes of Brent-Eligh and Preston in the county of Suffolk surveyed by Isaac Causton'; 1719. Add.MS 69459.