A roadmap of understanding the term 'roadmap'

The use of the term ‘roadmap’ to refer to a recognisable action plan or strategy has become firmly embedded in our everyday language. A 'roadmap to peace', a 'roadmap of financial recovery', for example, is used to describe something that has been coherently formed rather than scribbled on the back of an envelope.

Although the origins of the use of the phrase ‘to map’ in a planning sense is obscure (as indeed is the word ‘map’ itself as Matthew Edney has recently reminded us), its use does seem to have increased in recent decades in politics and the media. But how does the idea of a ‘roadmap’ (to recovery, peace etc.) align with the act of actually using a road map to get from, say, Milton Keynes to Ullapool in a car?

The earliest ‘road maps’ we know of were probably not originally intended to accompany an actual journey, though the information collected from first-hand travels would almost certainly have contributed to their compilation. 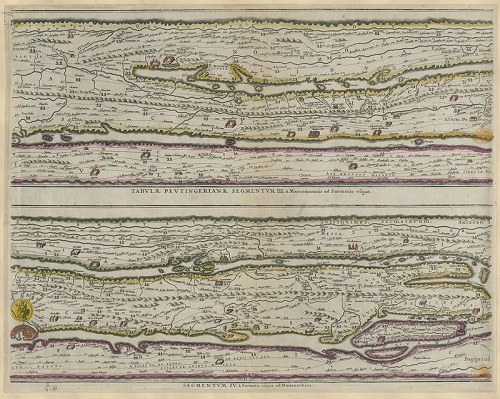 One of the earliest surviving road maps, The Roman Tabula Peutingeriana or Peutinger Map (a 13th century copy of a lost 4th century original, now in the Österreichische Nationalbibliothek in Vienna) shows the network of roads across the Roman Empire between south east England and India. It was more likely to have been used to plan, strategise and even commemorate, than to physically accompany a journey. 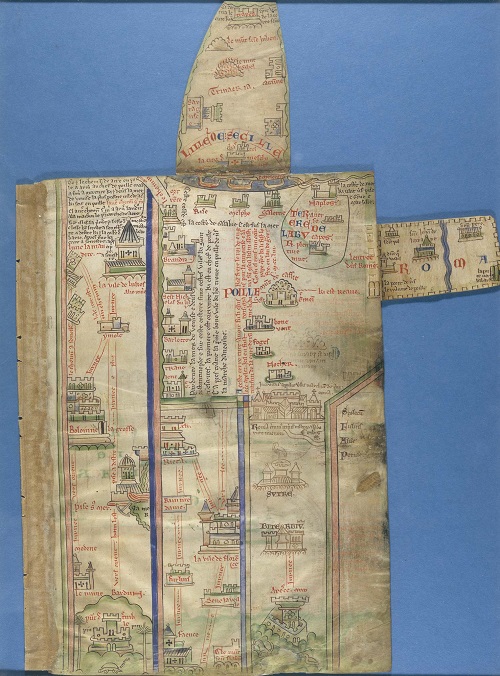 In a similar way, Matthew Paris’s famous itinerary maps of Britain, Europe and the Middle East from the mid-13th century were probably intended to commemorate or record journeys rather than facilitate further ones. However, they would also have enabled people to perform ‘virtual’ journeys by using them in association with a form of mental pilgrimage. 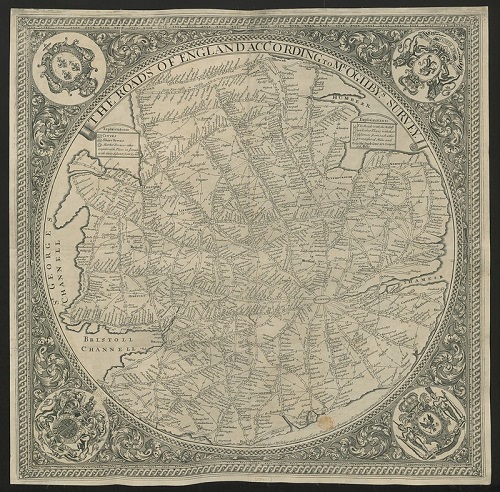 The practical British ‘road map’ we recognise today can be said to have emerged from the second half of the 17th century, when a genre of increasingly compact books emphasising routes (mainly today's 'A' roads, mostly following the work of John Ogilby) began to be published.

By the early 20th century, thanks to the burgeoning level of mobility and map literacy, (discussed at length in our 2016 exhibition on mapping the 20th century and this book) the road map became one of the most recognisable and functional maps available.

The politician's use of the word 'roadmap' is therefore perfectly consistent with the probable original use of road maps to plan and strategise, before they came to be used for actual wayfinding. However, how 'roadmap' came to be adopted in this way is probably more likely attributable to the modern ubiquity of road maps rather than an implicit understanding of their original purpose.

While dealing with an enquiry I came across this beautifully coloured copy of Münster’s Cosmographia. This monumental publication is one of the most important works of the Reformation era and considered one of the earliest modern descriptions of the world. The first edition was published in Basel in 1544 containing twenty four double-page maps with numerous woodcut views and illustrations. The work proved to be so popular that it was followed by a further 35 complete editions and reprints in five different languages. 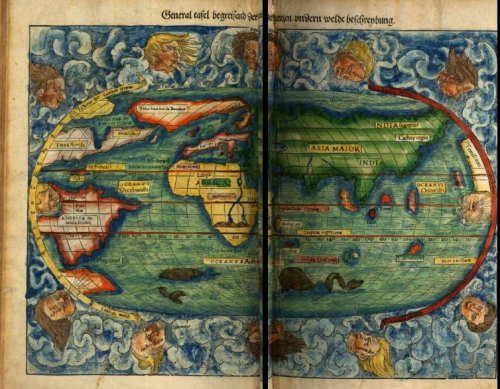 Sebastian Münster (1488-1552) was a true versatile scholar described as a cosmographer, geographer, linguist, historian, Hebrew scholar, theologian, mathematician, you name it! His Cosmographia is a compendium of historical and geographical knowledge compiled from information gathered as part of Münster’s personal research, international collaborations and editions of the classical authors. The work was based on up-to-date knowledge and provided the geographical and historical overview of the world, natural history, topographical features, boundaries and administrative division of the described lands, their inhabitants, flora and fauna. Divided into six books it contains a series of maps which advanced the cartographical knowledge of the time. 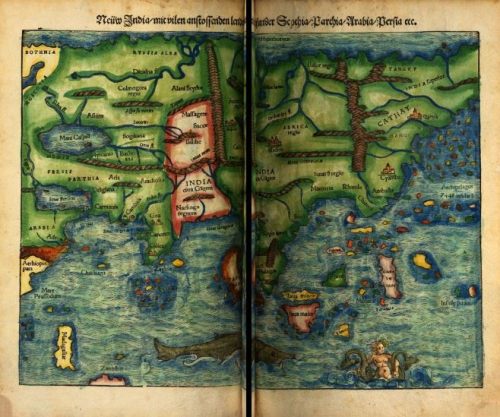 Münster not only was the first to introduce separate maps of four known continents, he also produced regional maps many of which were the first printed depictions of a given region. His vision and surprisingly modern thinking embraced many concepts familiar to an average 21st century person. He recognised that in order for his ambitious project to be successful it required reliable information which he as much as he wanted to was unable to collate all by himself. He realised that collaboration is the key and in his correspondence invited fellow scholars to send in information about their lands. His appeal had an enthusiastic response and Münster received contributions from all over Europe, in fact Cosmographia is a product of what we would nowadays consider a crowdsourcing project. 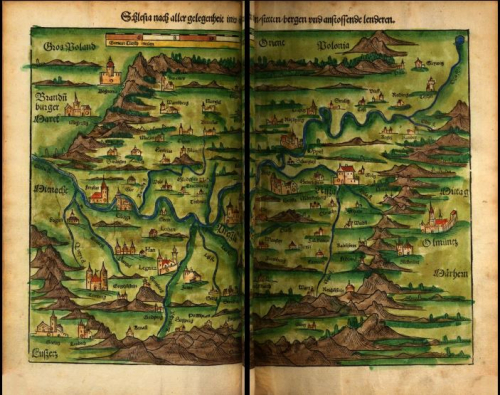 Not only a great scholar Münster was also a good businessmen – for example instead of commissioning new woodblocks he re-used some of the blocks (a number of which were created by artist such as Hans Holbein the Younger) from his earlier published works including his edition of Ptolemy’s Geographia (first issued in 1540). He then borrowed some of the woodblocks cut for Cosmographia and used them in his later editions of Geographia (for example the map of Silesia). Now, that’s what I call recycling!
He also recognised the potential of publishing in common languages including the rare Czech edition of Cosmographia issued in 1554 thus making knowledge more accessible by reaching wider audiences. 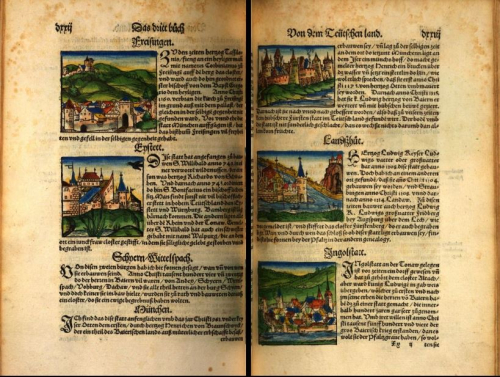 This incredibly influential work had a huge impact on the contemporary scholars, it was used as a geographical source by famous cartographers like Mercator or Ortelius and inspired publications such as Civitates Orbis Terrarum the popular city atlas published by Braun and Hogenberg a few decades later.

Posted by Magdalena Peszko at 4:09 PM