Maps and the Canals

Although the concept of waterways as a means for transportation has been known for centuries, canals still play a vital role in trade – as highlighted by the recent obstruction of the Suez Canal when a wedged vessel disrupted international trade for nearly a week causing havoc and massive financial losses.

In the British Isles since the medieval times trade relied on natural hydrography with its limitations as to where the routes were available which halted economic development in other regions. The advances in civil engineering and technology in the late the 18th century lead to a canal construction boom. These canals became a permanent feature of the British landscape and the canal network was gradually developed and expanded through the 19th century and, of course, appeared on many maps. This evolution can be traced in the maps found in the British Library’s extensive collections.

A Plan of the Navigable Canals, from Birmingham, to the Junction of the Canal, from the Rivers Trent & Severn, at Autherley, near Wolverhampton ... laid down from Actual Surveys, by William Wright. London, about 1791. Maps K.Top.6.38.

The construction of canals allowed for the transportation of much larger quantities of goods, raw materials and coal supply to factories, in comparison with the traditional methods of land transport by carts. The canals transformed the trade, completely changed the landscape of various industries and boosted the economy which hugely contributed to the Industrial Revolution.

The construction of a network of canals was an enormous engineering undertaking and posed many technical challenges. It required extensive surveys which were carried out by teams of surveyors and engineers who through their work gained experience and became experts coming up with some incredible (and expensive) designs. The end results however proved to be so profitable that they still attracted investors. 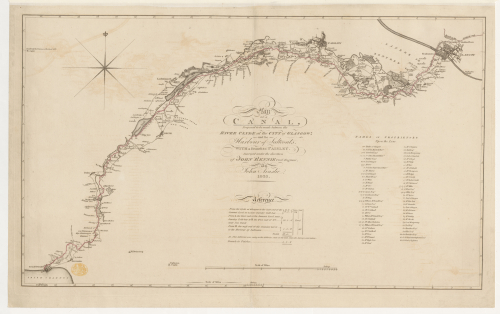 Plan of a Canal proposed to be made between the River Clyde, at the City of Glasgow, and the Harbour of Saltcoats, with a branch to Paisley: surveyed under the direction of John Rennie, Civil Engineer, by John Ainslie. London, 1803. Maps K.Top.48.81.

By the first decades of the 19th century the canal network covered most of England with the new grand scale projects submitted for approval by Parliament. The proposals were often accompanied by detailed plans and maps, which contained details on the technical difficulties and provided ingenious solutions such as navigable aqueducts, lifts, tunnels and cuttings giving insights into this enormous enterprise. 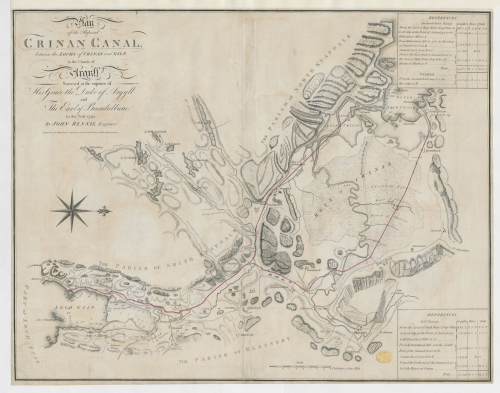 Plan of the Proposed CRINAN CANAL, between the LOCHS of CRINAN and GILP, in the County of Argyll. London, 1792. Maps K.Top.48.79.

The grand projects were associated with names of well-known civil engineers such as Thomas Telford, William Jessop, John Rennie and others. They often worked together and were involved in many projects such as the Pontcysyllte Aqueduct built in northeast Wales (to Telford’s and Jessop’s design), or the Crinan Canal connecting Loch Fyne to the Atlantic Ocean (originally planned by John Rennie with construction supervised by Telford).  Jessop was also in charge of the construction of the Grand Junction Canal (opened in 1805) which served as the main link between London and the industrial centers in the North and the Midlands. The Grand Junction Canal extension project which connected the Thames at Limehouse with the Paddington arm – the Regent’s Canal, took place between 1812 and 1816. 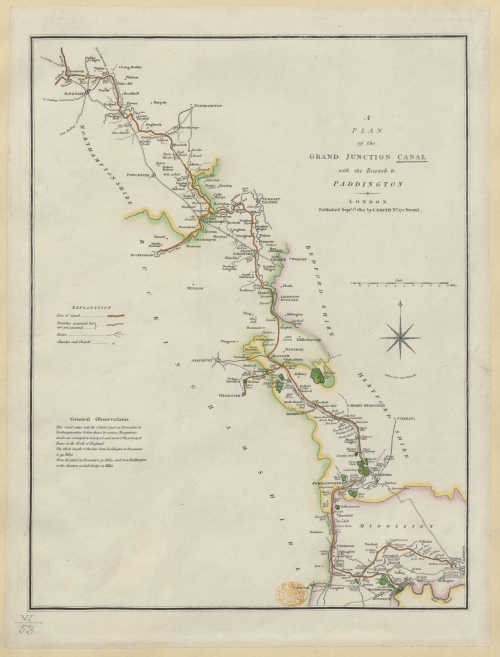 A Plan of the Grand Junction Canal with the Branch to Paddington, by Christopher Smith. London, about 1801. Maps K.Top.6.53.

Detail from the Surveyors' Drawing (sheet 152) showing section of the Grand Junction Canal at Paddington before the construction of the Regent's Canal. William Hyett, 1807. Maps OSD 152 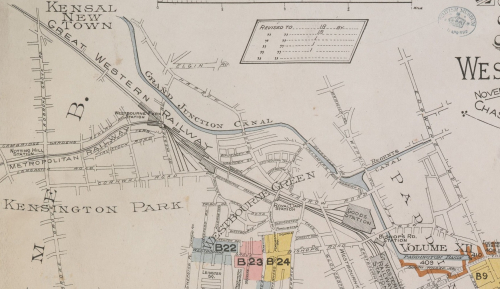 Although ultimately surpassed by rail the reliance on the canals had declined by the 1840s, but they still remained a part of the British landscape, often associated nowadays with scenic routes, wildlife and tranquil surroundings, it is easy to forget the significant and important role the canals played in the past.

Posted by Magdalena Peszko at 2:50 PM