The India Office map catalogue of 1878, now released online for the first time on the British Library Shared Research Repository, is a valuable finding aid to one of the world's most complex and mercurial map collections. 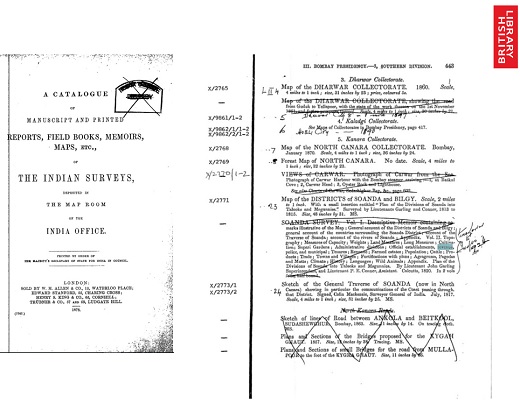 The title page of the 1878 map catalogue, and a further page with numerous crossings-out

The catalogue of manuscript and printed reports, field books, memoirs, maps, etc., of the Indian Surveys, deposited in the map room of the India office, compiled by Sir Clements Markham (1830-1916), was the first published listing of the working map archive of British East India Company, and the administration of British India from London. As the title suggests, it contains a wide variety of geographical materials, from maps to written sources and much else. Its principal geographical focus – about 70% of it - is upon the area of modern India, Pakistan, Bangladesh and Burma, but it also takes in adjacent areas, and more generally British imperial activity across the world, with the bulk of the material dating from the 19th and early 20th centuries.

In 1947 the collection, along with the rest of the India Office Records, passed into the care of the Commonwealth Office (various iterations), and in 1982 was deposited with the British Library. 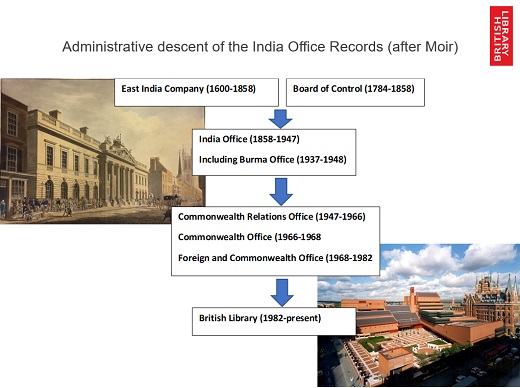 Diagram showing the administrative descent of the India Office Records

As late as the 1970s the catalogue was still being used to manage the map collection; the copy we have released is the one used by archivists to record the multiple changes to the map collection that had occurred between 1878 and 1947. These changes include annotations and inserted leaves listing maps that were added to the collection after 1878, and crossings-out of material that had been removed. These latter include material relating to the Great Trigonometrical Survey which was sent to the Survey of India in 1924, and large-scale maps and plans for infrastructure projects sent to Indian provincial public works departments. 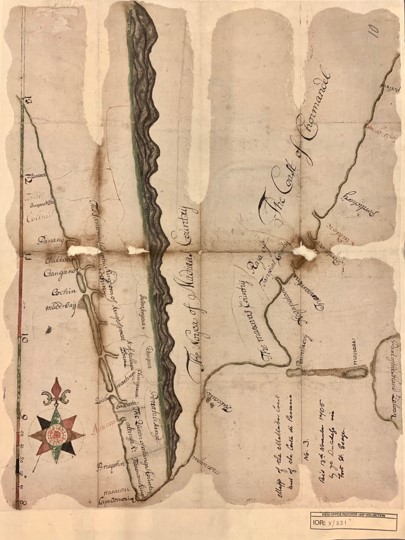 The catalogue is an indispensable aid for researchers looking to identify historical geographical sources for India and South Asia, and to order material to view onsite in the Library’s reading rooms. The ‘X’ numbers – the modern pressmarks or 'call numbers' for each unit (the material accessioned up to 1878 has the number range IOR/X/1 to IOR/X/4999), can be entered into the ‘request other items’ page of Explore the British Library under the Asia, Pacific and African Collection subset. There is also an incredibly useful alphabetical index to facilitate searching.

The catalogue is also valuable evidence of the history of the role of maps and geographical materials in the government of British India, and of imperial map archives in general. The arrangement and contents inform us of the particular mindsets  and priorities of the administration (inevitably, the focus and dates of maps in the archive broadly matches Company and administration activity) and how these shifted over time.

We hope you find this a useful resource, and would be very glad to receive feedback on the sorts of ways you are making use of it in your research. You can read more about the research repository, and explore other resources available there.