I recently participated in a discussion panel with the LivingMaps network as part of the launch of their ‘'New Directions in Radical Cartography: why the map is never the territory’. Edited by Prof Phil Cohen and Dr Mike Duggan, this edited collection brings together 20 examples of contemporary research, artwork and theory from across the world under the label counter-mapping or radical cartography. 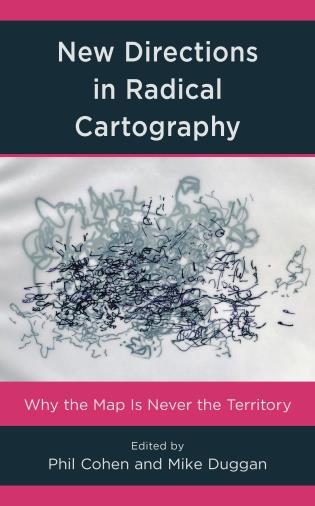 The definition of counter-mapping and radical cartography was a question that formed much of the discussion. Counter-mapping, described in depth in the book, is a process which really began in the 1970s following a realisation that regular or normative maps were perhaps not as democratic or utilitarian as assumed, and appeared to favour certain groups over others. Maps such as those by William Bunge and the Pluto Press aimed to readdress the balance.

Radical mapping, according to Phil Cohen’s introduction to the book, moves things along. Firstly, many of the examples in the book are not ‘maps’ in the way that many of us appreciate them (though they are perfectly consistent with other cultures’ mapping). The maps are community workshops, walking tours, audio-led immersive guides, poetry and reading, contemporary archaeology GiS, multi-media, memory palaces and more. Yet all of them can be understood as mapping in some way, if you believe that mapping doesn’t necessarily always lead towards the creation of a map.

That seems pretty radical to me. There’s also a sense of radical-ness in what the mappings are doing. For example, they are user-led and generated as opposed to being created by professional map companies or agencies. They are also open-ended and unfinished – incredibly radical if you are used to thinking of a map as a tangible object. They also, often in very quiet ways, articulate the voices of groups who do not usually shout very loudly on traditional maps - children, the elderly, and migrants. Quietly radical, if there is such a thing.

Critical cartography is a developing area of the academic discipline of cultural studies. As ‘post-representational’ mappings, this work is not collected by the British Library (in the same way that GiS is not collected). However, early maps are used creatively by artists and academics affiliated to critical cartography. For example, digitised British Library maps were included in Hakeem Adam and Maxwell Mutanda’s One Fifth of the Earth’s Surface project which was featured in last years York AND festival. And whilst not from the Library’s collection, map based artworks included in Claire Reddelman’s Postcards from the Bagne demonstrate just how successful the use of early maps in artistic and cultural practice can be.

Integrating early maps, digitally or physically, into a multi-layered multi-sensory perception of places in time known as deep mapping (as, for example, described by Dr Stuart Dunn in A History of Space in the Digital Age), is another of the key ways in which maps contribute to cutting-edge research and continue to be, in every sense, living maps.